Parents in college admissions scandal tell judge there was no conspiracy 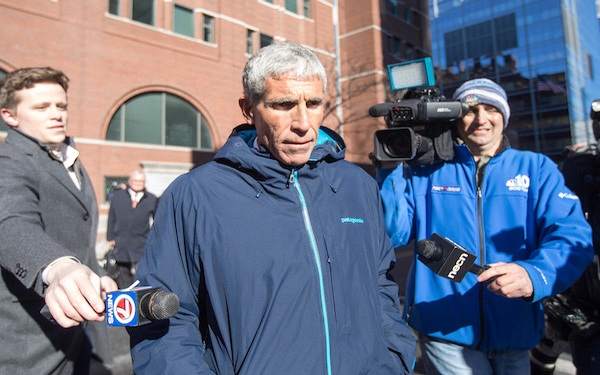 A Palo Alto, Calif., couple accused of paying $25,000 to rig their son’s college entrance exam asked a federal judge this week to dismiss the indictment against them, claiming there was no conspiracy among the parents entangled in the college admissions scandal.

Amy and Gregory Colburn’s defense, which is detailed in a document filed in federal court in Boston on Monday, is the first to be made public since prosecutors announced charges against a cadre of wealthy parents, coaches and others in the cheating scheme.

Their defense attorney, David S. Schumacher, argued in the motion that even if it were true that his clients paid a test proctor to correct their son’s SAT exam, as authorities have alleged, they did not act in concert with other parents. In that case, Schumacher said, prosecutors don’t have the legal ground to support the conspiracy charge.

The Colburns argue that the only thing they had in common with the other parents was their relationship with William “Rick” Singer, who prosecutors allege was at the center of the scheme.

The couple’s motion came on the same day that a handful of parents — including actress Lori Loughlin and her husband, J. Mossimo Giannulli — pleaded not guilty in the case. Other parents, including actress Felicity Huffman, have agreed to plead guilty in a bid for leniency.

Singer, who cooperated with FBI agents as they gathered evidence against coaches and parents and then pleaded guilty to several charges in a deal with prosecutors, worked for years as a college admissions consultant who offered a menu of legitimate services to wealthy families looking to buy their kids a leg up in the competitive world of college admissions. However, authorities allege he also gave parents the option to cheat.

For a sizable fee, Singer could arrange for an expert to take or correct their child’s SAT or ACT exam, prosecutors said. For even more money, Singer would bribe athletic coaches or administrators at a particular college to sell one of the admission spots the schools set aside for athletes, according to prosecutors.

The Colburns are accused of paying Singer $25,000 to doctor their son’s SAT test. The payments came in two chunks: The first was a transfer of $24,443 in stock and the second was a $547 check made out as a contribution to Singer’s charity for underprivileged students, according to an affidavit filed in court.

Singer used some of the funds to pay an accomplice at a school in West Hollywood, who arranged to have the Colburns’ son take his SAT exam at the campus, according to prosecutors. On the day of the test, Singer paid to have another collaborator — Mark Riddell — pose as the proctor for the exam and correct the boy’s answers before the test was submitted, prosecutors said.

Riddell, described by prosecutors as “smart enough to get a near-perfect score on demand or to calibrate the score,” was told by Singer to correct the Colburns’ son’s answers but to not aim so high that he realized someone had cheated on his behalf, according to court documents. Riddell has pleaded guilty in the case.

Schumacher compared the scheme to the mechanics of a bicycle wheel, claiming that Singer was the hub of the wheel and the parents were the spokes. However, there was “no rim of the wheel to enclose the spokes,” meaning that the parents had no conspiracy to cheat the college admission’s process, he wrote.

“Several parents are accused of independently engaging Singer in a variety of schemes to increase the possibility that their children would be admitted to various universities,” the attorney wrote. “However, a single conspiracy requires interdependence among participants.”

He added that there is “simply no reasonable basis for a jury to conclude that the Colburns had any interest in whether other people’s kids got into college.”

Manny Medrano, a defense attorney and former federal prosecutor, said the legal argument — while not uncommon — is not likely to hold water with a judge. The conspiracy statute allows the government to cast a wide net when prosecuting cases, he said.

“One of the misconceptions about the conspiracy law is that the person charged must have known what everyone else was doing. That’s absolutely false,” Medrano said. “All you have to show is there was an overall conspiracy and that the defendant did one single act in that overall conspiracy.”