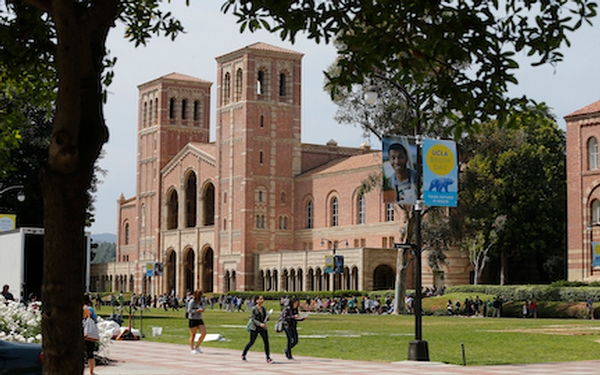 Like thousands of students each year, the high school senior hoped to secure a coveted spot in the University of California, Los Angeles freshman class.

She ran track for a private school in Los Angeles, but her personal best in the 800 meters wasn’t nearly fast enough to earn a place on a high-level college team. The UCLA track and field director had never heard of the runner.

But she had an advantage: Her parents were potential donors to the school.

The young woman’s admission to UCLA as a recruited athlete — and her parents’ subsequent $100,000 donation pledge to the school’s athletics program — were detailed in an internal investigation the university completed in July 2014, a year after she began taking classes.

The confidential report, reviewed by the Los Angeles Times, shows that years before the current college admissions scandal, UCLA knew of allegations that parents were pledging donations to its athletic program in exchange for their children being admitted to the university in violation of rules prohibiting the practice.

The investigation determined that the timing of the donation pledge by the parents “together with the revelation that she was intended to be only a manager, in violation of the department recruitment and admission policy, removes any reasonable doubt that the contribution from the parents was obtained quid pro quo for the daughter’s admission.” William Cormier, then the director of UCLA’s administrative policies and compliance office, wrote the report. It is unclear who received it.

The track and field director later said in a letter, also reviewed by The Times, that he had approved the admission at the request of a senior athletics official.

Families involved in the current college admissions scandal in most cases sent money to a purported charity through which the scam’s mastermind allegedly funneled bribes to university coaches and administrators. What happened at UCLA in 2014, according to the report, is different in that the money was donated to UCLA’s athletic program and did not break any laws.

Federal prosecutors last month charged 50 college administrators, coaches and parents in a sprawling scheme at schools across the country. UCLA men’s soccer coach Jorge Salcedo, who later resigned, was among those indicted. Prosecutors accused the coach of accepting bribes in exchange for helping two students gain admission to the school as soccer players though they didn’t play the sport competitively.

Universities, including UCLA, expressed shock at the alleged scheme and launched internal investigations. Dan Guerrero, UCLA’s athletic director, issued a statement defending the program’s admissions process as one of the toughest in the country.

Documents reviewed by The Times show UCLA was already aware that parents were trying to influence the admissions process through donations to athletics.

In response to questions about the Cormier report, UCLA issued a statement saying “policy expressly prohibits admissions ‘motivated by concern for financial, political or other such benefit to the University.’ Immediately upon learning of a potential violation of this policy in 2014, UCLA’s ethics and compliance officer initiated an investigation. The investigation’s recommendations focused on providing staff with training regarding, and accountability for following, UC admissions policies.” Guerrero was not made available for comment.

Cormier’s report indicates that UCLA knew about at least two students with limited or nonexistent credentials in their sports who were admitted as athletes.

The investigation was sparked by an appeal from the mother of a would-be athlete who had been entered into the school’s admission system in early 2014 as a recruit for an unspecified sport in which she had no experience. That admission was approved, then later rejected after a determination that it violated school and department policies. When the mother appealed, she said a private educational consultant — referred to by initials in the report — had advised her that the school’s athlete admissions process “could be influenced” by a large donation.

“She said she was told that this was a common practice,” the report said.

The report also raised questions about donation-related admissions involving other sports. Families of walk-on athletes in UCLA’s tennis program — it’s unclear if this refers to men, women or both — “made substantial donations to the program under circumstances that might suggest the donations were expected at the time the student was admitted,” according to the report.

The document did not suggest there was evidence that coaches received financial benefits in any of the cases. “The conclusion reached … is that the coaches involved were motivated principally by the expectation of a financial benefit to the University, in violation of Regents policy,” the report said.

An assistant tennis coach, Grant Chen, told Cormier that the track athlete was a family friend who attended his summer tennis camps.

“(Chen) said he knew the parents wanted to help out the track program,” the report said.

According to the report, Chen worked to get the woman recruited and, at an unspecified point, obtained a “verbal pledge” from her parents for a donation.

Michael Maynard, then UCLA’s track and field director, entered the athlete into the school’s admissions system on March 21, 2013, as a walk-on with a “scholar-athlete level resume” who could potentially contribute to the program. The woman is identified in the report only by her initials.

The same day that Maynard entered her name into the admissions system, the report said, Taylor Swearingen, a member of the athletic department’s fundraising staff, emailed Chen sample donation pledges for the parents. One was for $80,000 and the other for $100,000.

“That suggested that (the woman) was being admitted because the parents had committed to making a donation,” the report said.

The report said the woman eventually worked as a manager for the track team — students admitted through UCLA’s process for athletes are required to be “athletically qualified” and play on the team for at least the first year in school — and that Maynard’s involvement with the donation was “unclear.”

On April 22, 2014, more than a year after the woman’s admission, the report said Maynard emailed the parents “representing his first personal acknowledgement of their generous financial gift and asking for an opportunity to meet with the parents.”

Less than three months later, on July 9, 2014, Maynard sent a four-page letter to Guerrero explaining the admission. In the letter, Maynard said Josh Rebholz, now the school’s senior associate athletic director, had first approached him about admitting the woman.

“During the conversation Josh asked me if I had any room on my team for a female athlete, and if so would I assist with her admission,” Maynard wrote to Guerrero. “I asked who the athlete was, and what events she did. Josh indicated that he wasn’t sure what events she did in track, but that she was the daughter of major donors. … Josh indicated to me once again that her parents were major donors to UCLA, and it was very important to development.”

“In my opinion (the woman) was not athletically up to the performance level to participate in indoor or outdoor T&F. At this time I felt that I had been manipulated into coding her under false pretenses.”

It’s unclear if Guerrero responded to the letter. Rebholz did not respond to a message or a request for comment made through school spokesman Tod Tamberg. Rebholz, who isn’t listed among those interviewed as part of the investigation, wasn’t the subject of Cormier’s report and wasn’t disciplined as a result of it, Tamberg said.

Rebholz is an athletic department administrator with wide-ranging responsibilities that include overseeing external relations. His biography on the school’s website credits him with a dramatic rise in the number of people giving $25,000 or more to the Bruins each year since he arrived in 2011.

Tamberg didn’t answer questions pertaining to Maynard’s letter to Guerrero and whether the school accepted or kept the donation from the track athlete’s parents.

Maynard, who left UCLA in 2017, declined to comment, citing a nondisclosure agreement with the school. Glenn Toth, an associate athletic director whose oversight responsibilities included track and field until retiring in 2015, also declined to discuss the matter.

The woman, who graduated from UCLA in 2017, was never listed on the school’s track and field roster during the years she attended. The team’s media guides don’t list her as a manager, either.

The report didn’t accuse the woman or her parents of any wrongdoing.

In the recent case, Salcedo, the former UCLA soccer coach, faces federal racketeering charges — he has pleaded not guilty — for allegedly facilitating the acceptance of two students to the school as fake soccer players in exchange for $200,000 in bribes.

One of the students, Lauren Isackson, who had not played competitive soccer in high school, was listed on the 2017 women’s soccer roster. She never played in a game. Her parents, Bruce and Davina Isackson, pleaded guilty to several charges Monday as part of a deal with prosecutors.

In his statement last month, Guerrero called the behavior “disturbing and unacceptable.”

“We believe that our process is among the most demanding and thorough in collegiate athletics,” Guerrero said, “but, as the recent news illustrates, it is not foolproof.”