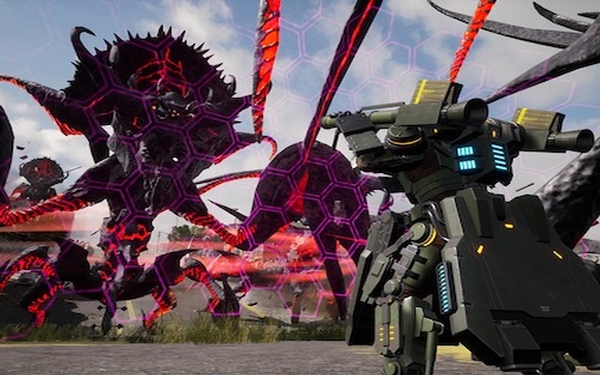 I think that the “Earth Defense Force” series is one of those games you either get or you don’t. You either understand what’s great about an arcade-style third-person-shooter that lets you blow up giant insects in a chaotic fervor or we probably just don’t get each other and never will. I don’t think I’m alone in the sentiment either. While the “EDF” series may never have the reach of some other titles out there what it does have is a very dedicated, nearly cult-like following of adoring fans. That following has only grown over the years as the game has improved. Now, we find ourselves here on the precipice of an entirely new era for “EDF” as” Earth Defense Force: Iron Rain” launches onto the PS4.

Iron Rain isn’t so much a new chapter for “EDF” as much as it is an entirely new story made with a western gaming audience’s tastes in mind. In many ways, “Iron Rain” succeeds at delivering key new features and details that fans will be excited to experience, but at the same time, multiple aspects still stay the same for better or for worse.

As is the custom for “EDF” games, the plot is light and campy, although admittedly the story is much more present in Iron Rain. Players take on the role of a legendary soldier who survived a key battle against an alien invading force seven years ago known simply as the “Closer.” Since that time, the Closer has been in cryogenic suspension awaiting a moment when once again their special skills and one-of-a-kind physical augmentation gear (PA-Gear) would be needed to protect the homeworld. Now, the Closer has awakened to once again battle the mysterious alien aggressors as well as a rogue faction of soldiers known as the Kindred Rebellion.

This is the first time I’ve ever seen cut scenes and soldiers be more than nameless fodder which is a nice touch, but the dialog and characters are just as cheesy as ever. The writing is still very much on that late night sci-fi B-movie level though and very laughable. However, some of the tropes left a bad taste in my mouth. For instance, one of the narrative voices is a mad scientist type character named Dr. Mengel. There’s nothing inherently wrong with having a crazy doctor with a German accent as a character, but the name is too close to Josef Mengele, a Nazi scientist who experimented on Jews and other prisoners trapped in Auschwitz during WWII. I don’t think the game is intentionally anti-semitic or anything like that, but it is an example of how tone-deaf some of the dialog and characters are in Iron Rain. Fortunately, this isn’t a game that you’re going to be playing for its brilliant storytelling anyway.

“Iron Rain” does deliver one of the most enjoyable and extremely challenging experiences that I’ve ever had with the “EDF” series. It doesn’t reinvent the wheel or anything like that as far as gameplay or mechanics go, but it does make some great tweaks here and there that make it one of the most notable entries in the franchise’s history. This is still a game that’s primarily about blowing up bugs, aliens, and kaiju, but there’s a lot more customization as far as how you go about doing such things.

The pivot from a class-based weapon system to one that lets you purchase and equip any weapons you want is a good move that allows for some creative combinations, like a Jet Lifter with a laser sword and a minigun. Replacing the support class with the new Prowl Rider (more on that in a minute) and allowing each class to carry a limited supply of support items like health packs, revives, turrets, and vehicles is another welcome new feature. Being able to customize my avatar and unlock new outfits as I progressed through Iron Rain was something I’ve been personally wanting to see in the series for a long time as well.

With the exception of the Prowl Rider, “EDF” fans will be more than familiar with “Iron Rain’s” character classes: The standard run-and-gun Trooper, the high-flying Jet Lifter, and the dual-weapon wielding tank known as the Heavy Striker. One thing “Iron Rain” does very well is building you up to unlocking the more nuanced classes as you progress through the campaign. Usually, players have to have to start from level one when switching classes, but now everything is tied to your character instead of the class itself which allows for even more customizability.

The Prowl Rider class is a very welcome addition to the line-up. Playing as a Rider is basically like being an Attack on Titan character with the special power to summon a giant bug that does their bidding. If that sounds like it would be an awesome gaming experience, it’s because it is. Although it does make me wish that the special overdrive abilities of the other classes were a bit more special. Everyone else basically gets the same damage and speed buffs as well as unlimited boost for a short amount of time. Granted, you could still pull off some very cool moments of badassery with those tools, but they don’t quite compare to riding around on a giant scorpion while it cuts your enemies in twain.

As I’ve said before, the core concept behind the gameplay is basically the same as ever: Kill all the things in an action-packed frenzy of exploding monster bits. However, “EDF: Iron Rain” is the most challenging the series has ever been, and it’s not like it’s known for being a walk in the park to being with. Players will have to think much more carefully about what load outs to bring into the fray and how to approach a situation. Learning when in a mission to go all-out with an over-drive ability is another key factor in level strategy.

Players are also now graded at the end of each level based on things like the time it took to complete, how much damage was taken, and whether or not their PA gear overheated. In order to keep players from spamming support gear, each item used or vehicle called in costs gold at the end of a round. I can see why the system was put in place, but the prices for some things seem a bit steep. It’s definitely odd that players who revived a downed teammate in combat stand to lose money, especially since they’re not the ones who made a few mistakes and died.

“EDF: Iron Rain” is definitely a game that will offer up single players a grueling challenge even on normal mode, but these games were never really meant to be played solo. Because of the extra challenge, “Iron Rain” has even upped the co-op player count from four to six. Any time I can get more friends in on the fun in any game it’s a welcome addition and in the case of “Iron Rain,” you really get the full experience playing with a squad.

As far as I know, this is also the first “EDF” to feature PvP in the form of Mercenary mode. Right now there’s only one game for it called Scavenger. It pits two teams with up to four players each against each other in an arena full of creatures. Players must collect the gems that the creatures drop and then deposit them at certain locations on the map to earn points. The team with the most points wins that round and the first team to win three rounds takes the match. As the rounds progress the enemies get tougher and the time decreases making it even harder to score. Playing PvP earns mercenary points which can be used to unlock new online titles that come with bonus currency to use in the campaign. While adding a PvP mode was a nice touch, it’s rather mediocre in its execution. Still, I’m not going to knock a game for trying or adding what I would consider to be bonus content.

This is also hands-down the most gorgeous “EDF” game I’ve ever seen. Many levels were modeled after US cities this time around and resemble things like an abandoned San Francisco overrun with giant ants, a Seattle buried in sand dunes, or coastal beach being invaded by a giant kaiju. One level feels like a nice homage to the classic video game “It Came from the Desert,” which just also happened to be about a giant bug invasion.

While many of the returning enemies have gotten a high-def makeover, some even have a few new abilities, for example, spiders now carry hordes of baby spiders on their backs that will chase down players and explode. There are also some fantastic-looking new creatures, that range from robotic turtles to strange giant aliens that look like something straight out of Starship Troopers. One massive kaiju, in particular, left me and everyone in my party in awe when it showed up on screen.

“Earth Defense Force: Iron Rain” stands out to me as one of the most enthralling, challenging, and gorgeous entries in series, if not the most. It does have some glaring flaws, like the imbalances in the new currency system. Balancing issues like the Jet Lifter running out of boost too quick, or how long it takes the meter to recharge after overheating. I also experienced several crashes while playing.

Despite these issues, I just can’t quit “Iron Rain.” It’s just too addictively fun to give up on and any “EDF” fan that’s been around long enough is most likely used to these games having a few blemishes. In the case of “Earth Defense Force: Iron Rain,” in particular, the good definitely outweighs the bad. I love this game and I will probably be playing it until the next one comes out, which could be a bit since we just got “EDF 5” and “Iron Rain” about four months apart.

This review is based on a PS4 digital copy provided by the publisher. “Earth Defense Force: Iron Rain” is available now on the PS4 exclusively for $59.99. The game is rated T.

Reviews
‘Animal Crossing: New Horizons’ is about sharing and annoying your loved ones
306 views