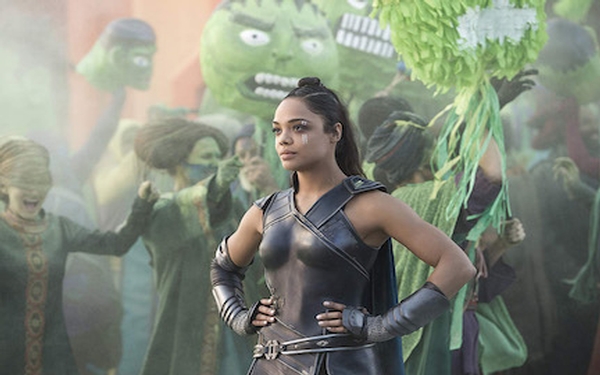 Tessa Thompson's Valkyrie quickly became a fan favorite in the MCU after her debut in "Thor: Ragnarok." (Marvel Studios/IMDb/TNS)

The third “Avengers” film, which ended with the disintegration of half of the universe’s populations, began in the moments directly following a post-credit scene in “Thor: Ragnarok,” in which a spacecraft carrying the survivors of the recently destroyed Asgard — including Thor, Loki, the Hulk and emergent hero Valkyrie, played by Tessa Thompson — come face to face with Thanos’ massive ship.

Within the first 10 minutes of the film, the male heroes are summarily defeated by Thanos, and yet Valkyrie is nowhere to be found.

“Sometimes I say she was in the bar,” said Thompson during a press day for her latest, the indie “Little Woods,” out Friday. “She’s alive though because [“Infinity War” and “Endgame” filmmakers] the Russo brothers have said that, she’s not dead.”

But did she manage to survive Thanos’ universe-leveling snap?

“She’s in form,” Thompson said, which was later confirmed by a character portrait released by Marvel. The studio tweeted out simple head shots of Earth’s mightiest heroes with portraits of the snap victims rendered in black and white, with the known survivors photographed in color, including Valkyrie.

But due to the top-secret nature of everything about the film, Thompson can’t actually confirm that Valkyrie will make an appearance in “Endgame.” And as for an upcoming “Thor” sequel, Thompson said she doesn’t know for sure it will happen. (Marvel has kept most of its future MCU plans under wraps until “Endgame” is released.)

“I heard that a pitch has happened for [another “Thor” film]. I don’t know how real that intel is, but I hear that the pitch has happened. I think the idea is Taika [Waititi, who directed ‘Ragnarok’] would come back.”

Further stoking fan interest in the character, “Captain Marvel” star Brie Larson shared fan art on Twitter depicting Captain Marvel cradling Valkyrie in her arms. “We cute,” Larson captioned the photo before tagging Thompson. Thompson says when she reposted the photo, she didn’t realize the intimate undertones of the image.

“That’s wild!” she said with a laugh. “It didn’t even occur to me, legitimately, that it was necessarily a romantic thing. I don’t even know what happens in the canon in terms of those characters or if they ever intersect, but I just love the idea of more women Marvel characters getting to intersect. I just think it’s so cool and it’s time and why not? There’s so many compelling female characters inside of the MCU.

“And just selfishly, when I get to see those women in passing, they’re all such cool women,” she added. “So the idea of getting to spend time with them and hang out is so fun. I’m just excited that this new phase promises to have women and queer folks.”

“I kind of ship them, but I would like to have a drink with them,” she said. “I also have seen some other people shipping Thor and Captain Marvel which, when they see each other, that’s kind of steamy. [But] I don’t think I ship any two characters. I’m just for everybody.”

Special Features
Secret screenings. Redacted scripts. How they make the twists in ‘This Is Us’
108 views

Special Features
NBC has a novel solution to the dearth of female directors: Let them direct
372 views

Special Features
Virtually every film coming out this fall
734 views