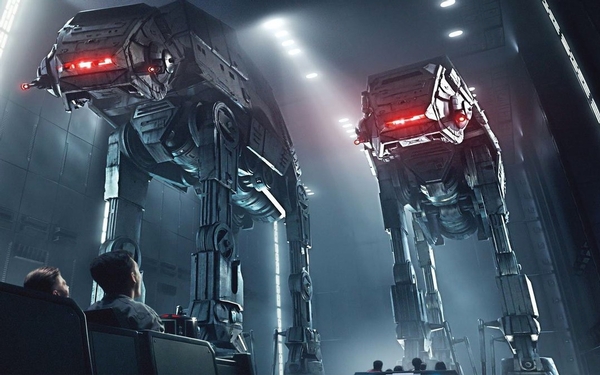 Now that Star Wars Celebration is over at McCormick Place, now that all the announcements are made and the panels are finished, now that official remarks have been parsed, winks noted and lines read between, here are a few things Celebration told us about the future of the most popular franchise in movie history. Please note: If you are exhausted by “Star Wars” — if you are Jedi agnostic and never want to hear of any galaxy far, far away again — know this: So goes “Star Wars,” so goes pop culture.

I didn’t leave Celebration with an Imperial Walker tape dispenser. But I could have. This is not a franchise that has ever been shy about wanting to saturate your personal space. Yet apparently Lucasfilm would prefer you to simply immerse yourself in “Star Wars.” This summer, Disneyland in Anaheim, Calif., and Disney World in Orlando, Fla., will open “Star Wars” parks in its resorts, and if the presentations at McCormick were right, you’ll drink blue milk and meet an animatronic Yoda (voiced by Frank Oz) while being surrounded by a new score from John Williams (written exclusively for the parks). They said nothing about previously announced plans for a “Star Wars” hotel in Orlando, but we did hear that visitors to “Star Wars: Galaxy’s Edge” can download an app that, to cite one function, refashions phones into language translators.

So you can talk to Wookiees.

Can’t make it to Orlando? Also coming, “Vader Immortal,” an interactive virtual-reality series by Batman screenwriter David Goyer and co-starring Maya Rudolph (as a droid). At a panel for the series, one of its developers explained she was inspired after feeling increasingly distanced from the traditional, passive act of — sigh — just watching.

Should you ever feel the need to return to real life, a new Marvel comic will be waiting that promises to tell the stories of all the objects you saw in the “Galaxy’s Edge” antique shop. (Where “Star Wars” fandom begins and paychecks end is getting sort of blurry.)

TAKEAWAY NO. 2: THIN SLICES AS THE WHOLE MEAL.

There’s the original trilogy, the prequel trilogy, now the sequel trilogy; not to mention the book trilogies, video games and comic books. Expect future “Star Wars” stories to dig into not only the before and after but also the in-between slivers of time and peripheral characters connecting moments between the movies. This is nothing new, but since the soul and legacy of the franchise, the Skywalker saga, concludes in December with “The Rise of Skywalker,” that connective space is looking even more valuable. For instance, EA has a cool new game, “Jedi: Fallen Order” (coming in November), that takes place between the prequels and originals; similarly, “The Mandalorian,” the first live-action “Star Wars” TV series, also previewed, is set between the originals and sequels.

In other words, all that time that once happened off-screen, when characters and worlds presumably continued when you weren’t looking? That’s now downtime worth exploring.

TAKEAWAY NO. 3: A UNIVERSE OF THEIR OWN.

I met a few women from Texas at Celebration — three older women, former librarians and teachers among them, seated in walkers — who have been fans for 40 years, but when the subject turned to women in “Star Wars,” they looked uneasy. One even said Lucasfilm’s recent emphasis on more female heroes “was maybe overdoing it a little.”

Hate to break it: “Star Wars” casting increasingly resembles the real world, and don’t expect it to change. At the panel for the next “Star Wars” movie, the only major character introduced was a black woman (Naomi Ackie) who may or may not be the daughter of Lando Calrissian. The second lead in “The Mandalorian” is former MMA star Gina Carano. The new characters added to the revival of “Clone Wars” are women; and on the Disney Channel animated series “Resistance,” the most interesting character so far is voiced by Myrna Velasco, a Mexican-American actress.

And that’s just on screen: Two of the five “Mandalorian” directors are women, actress Bryce Dallas Howard (“Jurassic World”) and filmmaker Deborah Chow (“Jessica Jones”). Never mind that, just walking around Celebration, it becomes very evident that much of the fresh enthusiasm and energy throughout the fandom right now is female.

Fans of the animated “Clone Wars” TV series — and the even-better animated “Rebels” — know: Those animated shows (nurtured by George Lucas-protege Dave Filoni) capture the charm of the original “Star Wars” in ways some of the later movies miss. But outside of the fandom, arguably, these shows didn’t carry gravitas of the films.

Now with three new TV series in development — including a “Clone Wars” revival — and the upcoming Disney+ streaming service in need of original programming, “Star Wars” is being fitted for the Age of Peak TV. The big Celebration reveal was the Jon Favreau-led “Mandalorian” show, set during the power vacuum that forms after the fall of the Empire in “Return of the Jedi.” We got clips of Werner Herzog as a villain, and a Sergio Leone-like expansiveness. And it looks great, thoughtful, pricey and more adult than the movies. Tellingly, the audience’s reaction to “Mandalorian” was as excited as it was for the new film.

If Celebration is any measure, Lucasfilm is at a crossroads, saddled with the perpetual puzzle of any stewards of cultural landmarks that have stayed vital: How do you keep ambitious and relevant without losing the thread that connects back to the legacy? “Star Wars” is a cultural religion, and like any faith, there are reformers and an old guard. The future is the constant feeding of fans who attend church regularly while leaving room for new blood, a hint of risk, the vitality of art. The fractured response to “The Last Jedi” appeared to threaten assumptions that this was a fandom that welcomed bold ideas.

Some do. Lucasfilm president Kathleen Kennedy, at the opening event, subtly nodded at the need to remain progressive and pioneering in the stories that they tell. A day later, Favreau was taking pains to speak directly to the fanboys: “The Mandalorian” would be rich with Easter egg-like details that only the most diehard fans would spot.

The future is fan service, and frankly, it’s a creepy way to say you are appreciated — indeed, Kennedy and J.J. Abrams said exactly that. Though barely mentioned, two new “Star Wars” movie trilogies are in the works, one from “Last Jedi” director Rian Johnson, one from the makers of “Game of Thrones.” But not for a while: Because the biggest “Star Wars” news of the week was made outside Chicago, by Disney president Bob Iger, who said “Star Wars” films were going on hiatus for a few years. No one at Celebration groaned over this — a few years was once a sane amount of time for a franchise to reset. And besides, anticipation and nostalgia have always been the secret sauce of “Star Wars.”

If you doubt it, Lucasfilm has been collecting “Fanfessionals” to play at its theme parks, intimate StoryCorps-like conversations about what “Star Wars” means to you. But the problem remains: How do you build a yearning for something in front of you all day long? As Obi-Wan once said, the force will be with you, always.

We just didn’t know he meant, like, always always.