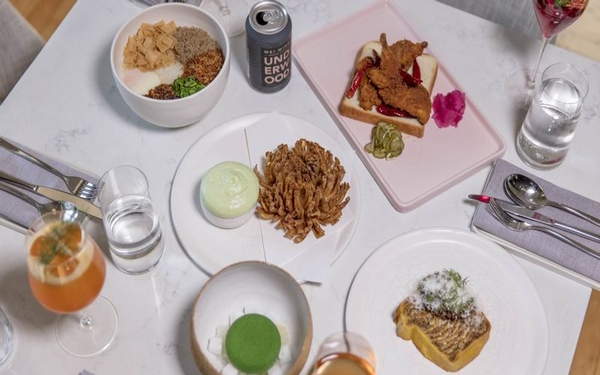 How Chinese food in America came to be synonymous with fried noodles and sticky-sweet meat nuggets is complicated. But regardless of the history, the association comes with a stigma that persists today: Chinese food is quick and greasy, and shouldn’t cost very much.

But Asian American chefs in California today are challenging long-standing ideas about how the foods they grew up eating should look and taste — and how they should be valued.

“It really is just trying to bring those familiar flavors into something different,” said Mei Lin, 33, who in January opened Nightshade, an Arts District restaurant where mapo tofu lasagna, Sichuan hot quail and Cantonese curry-tinged prawn toast share menu space alongside beef tartare and her rendition of a blooming onion.

The food isn’t the only thing that is evolving. Elements typically absent from traditional Chinese restaurants — tasting menus, an emphasis on service, luxe decor, innovative cocktail menus and wine pairings — are also showing up. The shift can be traced from the Bay Area down to L.A., and from the San Gabriel Valley westward.

It’s not necessarily about creating Chinese restaurants with a more Western focus, but about pushing ambitions for the future of the cuisine. This young generation of chefs is combining childhood nostalgia with professional culinary chops, local ingredients and fine dining mores to propel the perception and acceptance of Chinese cooking in new directions and into new neighborhoods.

“The first thing that comes to mind is tackling the perception that Chinese food is cheaper,” said Jon Yao, 27, the chef of Kato in West Los Angeles. “We’re creating the stepping stone for ourselves.”

Without a strong precedent in the U.S. for Taiwanese fine dining, Yao, a finalist for this year’s James Beard Foundation rising star chef award, is leading the charge by necessity. On the ground floor of a strip mall, he crafts a $95 10-course dinner — delicately plated ocean trout lashed with black vinegar, steamed Spanish turbot bathed in soy and ginger, a chicken liver-smeared riff on the pineapple bolo bao — as thoughtful and elegant as European tasting menus, but for half the price.

“It’s hard to remain in the confines of Taiwanese food, but we singularly try,” Yao said. “We’re just trying to push a boundary that hasn’t been pushed before. Because Taiwanese restaurants in the States always veer toward, ‘this is our scallion pancake’ or ‘this is our three-cup chicken.’”

Yao is in the early stages of planning a Chinese-Taiwanese fine dining restaurant in L.A. that he hopes could go the direction of Benu, Corey Lee’s three-Michelin-starred restaurant in San Francisco. Since opening in 2010, Benu has gradually morphed from largely Western-leaning dishes informed by Lee’s time under Thomas Keller into an elaborate tasting-menu-only format with a heavy Chinese bent.

That wasn’t the intention from the outset, said the 41-year-old Lee, who is Korean American. But as he observed which courses most resonated with diners and considered what brought him the greatest joy in the kitchen, he came to a realization:

“The dishes that I felt really proud of or that I really enjoyed cooking had some reference point to my upbringing, or the story of how Asian Americans fit into the local culture,” he said. “So it wasn’t so much of a conscious pivot — I think it was a slow change, or a slow evolution, into thinking more about that.”

Now, Lee estimates that eight of the 20 or so dishes on his tasting menu have roots in Chinese cooking, such as a chicken wing stuffed with abalone, faux shark fin soup, lobster xiao long bao and a Cantonese quail dish with XO sauce.

“We feature things like this siu yuk,” Lee wrote beneath a photo of Cantonese crispy roast pork belly in a December Instagram post, “and other ethnic foods like kimchi and dumplings — on our menu because they’re delicious but also because they are at least as technical and gourmet as any Western fine dining preparation I can think of, and I want to show that they have a place at the high table.”

Lin of Nightshade, too, cites a Bay Area chef as an inspiration: Brandon Jew, whose restaurant in San Francisco’s Chinatown, Mister Jiu’s, has been one of the city’s hottest tables since it opened three years ago.

Jew, a Chinese American chef who grew up in San Francisco and trained under Michael Tusk of Quince, said, “When I opened Mister Jiu’s, it was thinking about San Francisco as its own region and if I could express the region in a Chinese context.” So his scallion pancake is made with a naturally leavened sourdough starter; his $110 take on Peking duck comes from Sonoma County Poultry’s fowl.

Jew, 39, isn’t eschewing tradition — there’s a pot sticker on the menu, for example, an uncontested triumph of Chinese cooking that every diner has heard of. But he sees it as a gateway to getting deeper into the cuisine: If you like the pot sticker, he figures, maybe you’ll try the chicken feet terrine next.

Better ingredients, top-notch service, and food and drinks crafted by classically trained chefs come at a price, though. It’s a touchy subject for any chef trying to pay a fair wage and source responsibly, but it’s a particularly sore spot for Asian American chefs.

While diners have long been willing to pay top dollar for certain Asian foods, like sushi, they generally hold different attitudes about Chinese food. The prison of the low-price mentality has been difficult to escape — even for some of the best young chefs in the country.

Jew uses examples of traditional European styles of cooking to illustrate the disparity of expectations among diners: a willingness to shell out for one type of “ethnic cuisine” but not another.

“When people say, ‘Why is this so expensive?’ I’d like if they thought about that for Italian food or French food,” he said. “The sophistication of Chinese food is just as high.

“It’s like, I’m sure you’re not complaining about the price of the agnolotti that was last night’s roast that’s ground up,” he continued. “A leftover dumpling that’s basically served back to you.”

Yao in January increased the price of Kato’s Taiwanese-influenced tasting menu to $95 from $85, a $10 difference that he said caused “a backlash.”

“We get customers who are saying, ‘I can’t believe we’re paying $95 for this tiny piece of fish,’ “ he said. “First of all I’m like, ‘It’s not tiny’ and second of all it’s a very expensive fish we’re getting every single day.”

Benu, which costs $310 per person and is fully booked nearly every night, is one of the few restaurants to successfully break into the upper stratosphere (the more traditional Chinese restaurant Eight Tables in San Francisco, with its $225 tasting menu, has been less well-received). Lee knows his customers are paying “an extraordinary price” to eat at his restaurant, a concept that can be difficult for many diners to grasp, particularly for Asian food.

Expensive banquet food such as abalone and shark fin soup has always existed, of course: “The appreciation for fine food (both sensory and technical-wise) is nothing new in Asia, with most cultures there having a long tradition of highly refined cuisine,” Lee wrote on Instagram. “But this is America, where our native food is generally not as highly esteemed … ironically, for the same reasons, these preparations can be polarizing for Asian Americans whose exposure to Asian cuisine is primarily at home or in cheaper restaurants.”

Besides price concerns, Chinese American chefs are mulling over how to bring inventive takes to their cooking while hewing to authentic flavors and preparations — and grappling with the mixed feelings that arise when they feel restaurants stray too far.

Johnny Lee, who was the opening chef of Hainan chicken specialist Side Chick in Arcadia and now has an occasional Chinese food pop-up in Chinatown, recalled visiting Sea Harbour, a dim sum restaurant in Rosemead, a few months ago.

He wanted shumai, he said, “but they didn’t have it; they only had truffle shumai. My main gripe about it — it’s not like I’m above putting black truffle in shumai — but there’s definitely been this movement in Chinese restaurants where they’re trying to use Western luxury ingredients like foie gras, truffle and caviar, but sometimes they’re just throwing it on top.”

The 32-year-old chef suspects some restaurants in the San Gabriel Valley are loading up on such markers of high-end cuisine to attract affluent diners — particularly the new wave of deep-pocketed immigrants from China — and charge them more money.

But the approach hasn’t paid off for some. After opening in the summer and touting itself as the region’s premiere destination for Chinese fine dining, San Gabriel restaurant Opal abruptly announced in March that it would transition to group dining only. During its short time in business, the opulent Vegas-meets-Restoration-Hardware dining room largely sat empty, its stir-fried black pepper Wagyu beef and honey glazed BBQ Kurobuta pork not enough, in their ostensible luxury, to lure diners.

“The Westside has turned from a wasteland of Chinese food to a mecca of Chinese food,” said David R. Chan, a Los Angeles resident who has been tracking Chinese restaurants in America since the mid-1970s and has eaten at a staggering 7,500 of them. “Years ago, people were talking about, on the food boards, ‘Wouldn’t it be great if Din Tai Fung opened up a branch on the Westside?’ And most of the response was, ‘You should live so long.’ “

Din Tai Fung, now with seven locations in Southern California cranking out its xiao long bao, has made the Jiangnan dish nearly as commonplace as cashew chicken. While that’s the exception rather than the rule, there has also been a proliferation of regional expressions of Chinese food in recent years. Peppercorn- and chili-heavy Sichuan flavors dominate, but other regions are shining.

Dolan’s Uyghur Cuisine serves the underappreciated food of Xinjiang province in far western China: hearty manti dumplings and da pan ji, with ropy noodles and fat, roughly cut chunks of chicken. At Xiang Cuisine, a restaurant that opened a little more than a year ago in Monterey Park, the layered, rustic flavors of Hunan province are presented with braised meats, fiery dry pots, and fermented beans and radishes.

Rather than faithfully producing provincial dishes at Nightshade, Lin is experimenting with the form. This week, she added a new dish to the menu: a massive slab of pork schnitzel, inspired by her time working for Wolfgang Puck at Spago, that tastes of white pepper and five-spice powder — the bright, sharp flavors of Taiwanese popcorn chicken. It’s a dish that encapsulates where she’s from and where she’s been, and one she hopes diners will accept as a compelling interpretation of modern Chinese cooking.

“I’m super proud of what all these chefs are doing: reinventing Chinese food, Chinese flavors,” she said. “I want the general public to see what it can be as well.”