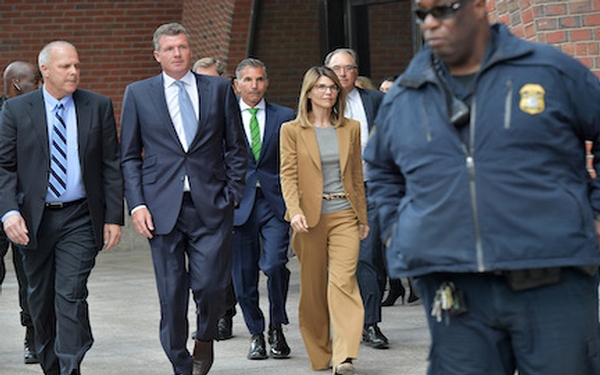 “Full House” star Lori Loughlin wants prosecutors to show their hand before she argues any major motions in the college admissions bribery scandal.

Lawyers for the actress, her fashion designer husband Mossimo Giannulli and 15 other defendants filed joint paperwork Monday asking the judge to suspend all “substantive motions” in the criminal case until a June 3 status conference.

“At present, the defendants have not yet received any discovery in this case and have been told by the government that it is extremely voluminous,” the new filing in federal court in Boston states.

“Defendants would like an opportunity to review discovery in a meaningful way before filing of substantive motions in this case,” it says.

“Litigating substantive motions in a piecemeal fashion and before defendants have an opportunity to become familiar with the government’s evidence could substantially prejudice the defendants’ ability to make proper legal arguments to contest the allegations,” the filing reads.

Prosecutors say Loughlin and Giannulli paid $500,000 to have their two daughters admitted to the University of Southern California as fake recruits to the university’s rowing team. Neither daughter had any competitive rowing experience.

A source told People.com on Monday that Loughlin is feeling “pressure” to take a plea deal in the case to spare her daughters.

The source said Loughlin “has every reason to believe” her daughters, including YouTube star Olivia Jade Giannulli, could be targets of the prosecution.

“Lori will not do anything to put her daughters in harm’s way,” the source told People. “She is like a mama bear when it comes to the girls, and she will do whatever she has to do to protect them from prosecution, especially malicious prosecution. Her top priority in all of this is to protect her daughters.”

Loughlin’s new court paperwork, meanwhile, came after two other California parents were the first to file a motion to dismiss their charges last week.

The Colburns, accused of paying $25,000 to rig their son’s SAT score, claimed the government’s decision to charge them and 18 other parents in one multi-defendant conspiracy prosecution lacks legal basis.

“The allegations establish at most that the Colburns are members of a much smaller separate conspiracy,” the filing said. “To allege a single conspiracy, the United States must allege a shared, single criminal objective, not just similar or parallel objectives between similarly situated people.”

The filing was the first peek at a possible defense in the case, and Loughlin’s new filing referenced it Monday.

“The Colburns raise arguments that are relevant to all the defendants charged in the Second Superseding Indictment,” the paperwork states.

Loughlin and Giannulli were arrested along with 31 other parents last month. At first, all the parents faced the same single count of conspiracy to commit mail fraud and honest services mail fraud.

Earlier this month, 13 of the parents, including actress Felicity Huffman, agreed to plead guilty in deals with prosecutors that sought to minimize their prison time.

The remaining parents, including Loughlin, were then indicted by a federal grand jury and received additional money laundering charges.

In their federal court filing in Boston, the Colburns argued through their defense attorney that the only thing connecting most of the parents was their relationship with admitted scam mastermind William “Rick” Singer.

Prosecutors in Boston claim the parents participated in the single conspiracy even if they didn’t know each other.

“Between roughly 2011 and 2018, wealthy parents paid Singer about $25 million in total to guarantee their children’s admission to elite schools including Yale, Georgetown, Stanford, the University of Southern California, the University of Texas, UCLA and Wake Forest,” U.S. Attorney Andrew Lelling said last month.

“These parents are a catalog of wealth and privilege,” he said. “All of them knowingly conspired with Singer and others.”

Campus News
What’s the risk of COVID-19 for a healthy young person?
1,100 views