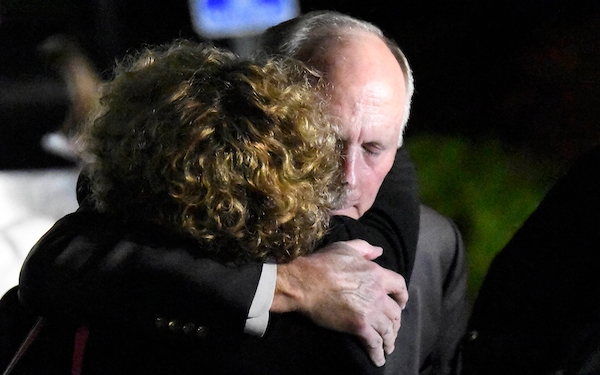 UNC Charlotte Chancellor Philip DuBois receives a hug after a news conference in the concerning a deadly shooting on the campus of UNC Charlotte on Tuesday, April 30, 2019. (David T. Foster II)

With a suspect in custody following the shooting at UNC Charlotte, investigators continued to piece together how and why the students were shot dead and four others injured during a class on science and technology.

The suspect, identified by police as Trystan Andrew Terrell, 22, was taken into custody in the Kennedy Hall classroom within minutes of the 5:40 p.m. shooting on the last day of spring classes. A campus lockdown was lifted before midnight Tuesday but exams were canceled Wednesday and non-essential employees were told to stay home.

Three of the four injured students were in critical condition, and police had not named them. UNCC student Drew Pescaro was among the injured but had since been released from the hospital, according to his fraternity and the student newspaper.

Dubois said on WBT that one of the injured students is from Charlotte and another from Saudi Arabia.

The shooter was armed with a handgun but was “not somebody on our radar,” campus police Chief Jeff Baker told reporters. Baker would not say whether the suspect targeted certain students or fired at random.

The shooting took place inside Kennedy Hall, on the east end of campus. The building is home to UNCC’s Center for Teaching and Learning, which focuses on innovating teaching methods. The high-tech classroom is centrally located in the building, with big glass windows that peer inside Room 236.

“My students are so special to me and I am devastated,” he said on Twitter. Students were conducting team presentations as part of the lesson at the time, he said.

Dubois called Tuesday “the worst day in the history of UNC Charlotte.”

“This shakes us to our very core,” he said in a statement.

UNCC describes itself as an urban research university with more than 29,000 students from 85 countries, and is part of the UNC public university system. It offers undergraduate, graduate and professional programs.