By Anna Orso - The Philadelphia Inquirer 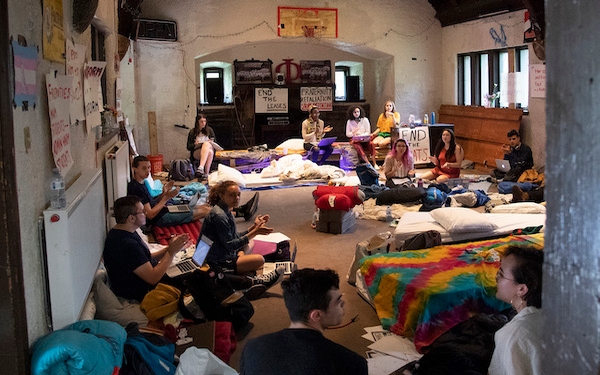 Students sing songs inside the main hall of the Fraternity home in Swarthmore College. Tuesday, April 30, 2019. The sit-in protest is part of Members of Organizing for Survivors. (Jose F. Moreno)

Swarthmore College’s two remaining fraternities announced late Tuesday they will disband amid outrage over leaked internal documents from one of the groups that suggested members made offensive comments about women and minorities and joked about sexual assault.

The move was cheered by campus activists, dozens of whom have occupied the Phi Psi fraternity during a four-day sit-in, demanding the school administration ban the Greek organizations permanently. Administrators had suspended fraternity activity pending recommendations from a task force convened to review the organizations’ fate.

The first to announce it was disbanding was Delta Upsilon, which was alleged in the leaked documents — supposedly written by a former Phi Psi member who has not been identified — to have a “rape tunnel” and a “rape attic.” The Inquirer has not been able to independently verify the authenticity of the documents, redacted versions of which were published by two campus publications.

The fraternity posted on Facebook at 9 p.m. Tuesday that it “unanimously decided that disbanding our fraternity is in the best interest of the Swarthmore community.

“We hope that our former house will provide a space that is inclusive, safe, and promotes healing,” the post read.

An hour later, Swarthmore’s chapter of Phi Psi, which is not nationally affiliated, posted a message to its Facebook with similar language, saying “the brothers unanimously voted to dissolve Phi Psi fraternity on Swarthmore’s campus following a week of deliberation.”

“We cannot in good conscience,” they wrote, “be members of an organization with such a painful history.”

Swarthmore College is a most-selective, liberal arts school with about 1,600 students and a Quaker history of decision by consensus. It also has a decades-long history of on-campus student activism that’s led to a handful of concessions by school leaders.

About two weeks ago, the Phoenix, the independent campus newspaper, and Voices, a left-leaning alternative publication with an activist bent, released a trove of redacted, internal fraternity documents from 2012 to 2016 that they say were anonymously leaked. The “meeting minutes” chronicled Phi Psi parties, made jokes about date rape drugs and other illegal drug use, and included photos of women in the fraternity house.

In a message to the campus community Wednesday, college president Valerie Smith wrote that while the documents “provide a vivid account of deeply disturbing, unacceptable behaviors and practices,” the school has “no evidence that any current student participated in the behaviors documented in those materials.”

She wrote that an external investigator will still examine the documents to ensure that is the case and said the work of the task force will continue.

Still, the community has “much healing” to do, she wrote, condemning “unsubstantiated attacks” and “social media posts by members of our community that target individual students or make gross generalizations about student groups.”

The Phi Psi house served as more of a clubhouse than a residence — just one student lived in the building.

Swarthmore Borough Police were present at the sit-in, but no arrests were made.

Tuesday night’s announcements mark an end point of years of simmering tensions between Greek life and the Swarthmore study body.

Activists said late Tuesday night they were celebrating the decision and deciding next steps.

The same group that organized this year’s protest, Organizing for Survivors, staged a nine-day sit-in at Swarthmore’s administration building last year, demanding new sexual-assault reporting procedures and that the fraternities be banned from campus.

The group ended the protest after meeting with school leaders and, a week later, the dean of students announced her resignation.