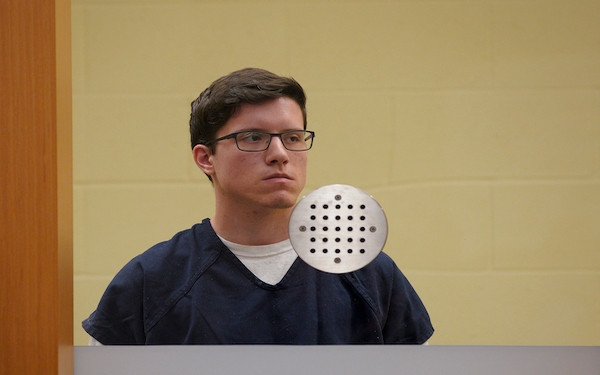 John Earnest, 19, accused of killing one and wounding three others in the Chabad of Poway shooting on April 27, 2019, appears in San Diego Superior court with his attorney, John O'Connell.

A 19-year-old man accused of shooting four people — killing one — inside a Poway synagogue on Saturday made his first appearance in court Tuesday, pleading not guilty through his attorney to murder and other charges in what could become a death penalty case.

John T. Earnest of Rancho Penasquitos was arrested shortly after the shooting. In addition to the murder charge, he faces three counts of attempted murder, gun allegations and one count of arson associated with a fire at an Escondido mosque last month. Because of special circumstance hate crime allegations, Earnest could face the death penalty.

The district attorney’s office has not yet decided whether it will seek the death penalty if Earnest is convicted.

When issuing that order, San Diego Superior Court Judge Joseph Brannigan said Earnest, based on the crimes he is accused of committing, represents “an obvious and extraordinary risk to public safety.”

After the court hearing, District Attorney Summer Stephan told a crowd of reporters that Earnest bought the rifle legally. She would not elaborate on whether he purchased it out of state or in California before state law changed this year to ban rifle sales to anyone under 21.

On the question of seeking the death penalty, Stephan said she has spoken with some victims and families, but would not say if they asked her to pursue the ultimate penalty or a lesser penalty of life in prison with no possibility of parole on the murder count.

Prosecutors have to prove why a hate crime was committed by looking at the defendant’s words or actions before, during and after the killing, Stephan said.

Stephan said Earnest could get another 103 years to life if convicted of the additional charges.

Earnest is accused of walking into Chabad of Poway during a Passover service late Saturday morning armed with an AR-15-type of rifle and opening fire, killing a 60-year-old woman and injuring the rabbi, a worshipper and an 8-year-old child.

Deputy District Attorney Leonard Trinh told the judge that Earnest was wearing a tactical vest when he entered the synagogue and had with him the semi-automatic rifle and five 10-round magazines.

The prosecutor said Earnest encountered Lori Gilbert-Kaye in the foyer of the building and shot her twice as she turned to flee. She died of her wounds.

Rabbi Yisroal Goldstein was next person shot, the prosecutor said. Goldstein was wounded in both hands and lost the index finger on his right hand as a result.

Trinh said the gunman turned toward a room where there were several worshippers, including children, and fired his weapon. Among those in the room were Almog Peretz, 34, who suffered a gunshot wound to one leg and his niece, Noya Dahan, 8, who was struck in her face and one leg by bullet fragments.

The gunman stopped firing, possibly because his gun jammed or he couldn’t eject the magazine to reload, authorities said. Several people chased the shooter out of the synagogue, including an Army veteran who charged at him and an off-duty Border Patrol agent who fired several rounds at the shooter’s fleeing vehicle.

Much of that was caught on surveillance video, the prosecutor said.

Earnest was stopped by police on West Bernardo Road near Interstate 15 and taken into custody without a struggle.

Trinh said a rifle, tactical vest, helmet and ammunition were recovered from the car. Inside the synagogue, 10 bullet casings were found.

The unrelated arson charge was added after Escondido police investigated what is believed to be a claim by Earnest that he set a fire outside the Dar-ul-Arqam Mosque on March 24. Seven people inside the building doused the flames. In the driveway, investigators found vandalism referencing the March 15 shootings at two New Zealand mosques that left 50 people dead.

Stephan declined to say whether Earnest had confessed to the Poway shootings, adding, “I don’t know of any evidence of expressions of remorse.”

She said authorities are serving dozens of search warrants at undisclosed locations, and at least one seeks documents surrounding Earnest’s purchase of the rifle. The FBI and other agencies are taking part in the continued investigations, she said.

Stephan confirmed that Sheriff William Gore has previously indicated there is no evidence that Earnest had any accomplices.

Trinh, the lead prosecutor on the case, told reporters that prosecution of hate crimes has tripled in the past year, and the primary targets generally are African Americans, Jews and gay people locally and nationally. Many perpetrators post their hate language online, and even if they act as “lone wolves,” he said, “they feed off each other.”

In an “open letter” posted online to explain why he had made plans to assault a synagogue, the writer believed to be Earnest described his motive as his hatred and “disgust” for Jews and fears for the “destruction” of the white race.

His parents released a statement disavowing their son’s views, saying he and his five siblings were “raised in a family, a faith, and a community that all rejected hate and taught that love must be the motive for everything we do.”

“How our son was attracted to such darkness is a terrifying mystery to us, though we are confident that law enforcement will uncover many details of the path that he took to this evil and despicable act,” the statement reads. “To that end, our family is cooperating with investigators.”