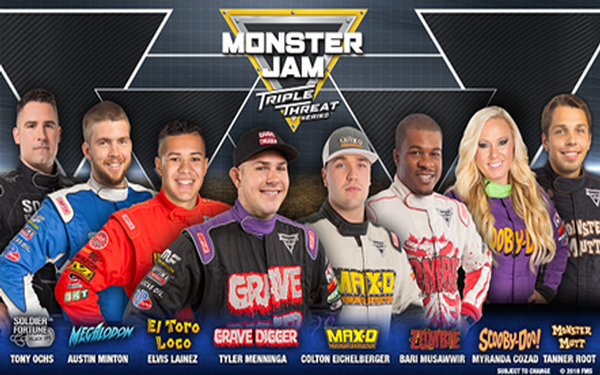 After packed-crowd season of Monster Jam stadium events at Angel Stadium earlier this year, Monster Jam Triple Threat Series™ will be revving through Downtown Los Angeles with another action-packed weekend of indoor arena events at STAPLES Center that will keep motorsport fans on the edge of their seats with adrenaline-charged, high-flying, four-wheel excitement that is fun for the entire family!  New this year as a special fan bonus during Freestyle driving segments, one Monster Jam truck/driver will be attempting SoCal’s FIRST-EVER Monster Jam indoor arena-based truck back flip stunt!

Unlike other Monster Jam events seen in SoCal/Anaheim before, the Monster Jam Triple Threat Series features eight of the most intense Monster Jam athletes in a fierce battle for the championship that tests the versatility and endurance of the athletes as they go head-to-head in a points-based format with seven different competitions driving three customized high-powered vehicles:  the larger-than-life 12,000 lb. Monster Jam trucks, Monster Jam Speedsters and Monster Jam ATVs.  These extreme athletes battle for points in challenging Racing and Freestyle events that push themselves and their machines to the limit – delivering what fans want to see the most… more trucks, more racing, more freestyle, more donuts, more wheelies, more action!

Monster Jam drivers are trained, world-class male and female athletes who have mastered not only the physical strength and mental stamina needed to compete, but the vital dexterity to control 12,000-pound machines capable of doing backflips, vertical two-wheel skills and racing at speeds up to 70 miles per hour to produce jaw-dropping, live motor sports action seen around the world. Now across all Monster Jam events, fans in every city will have the chance to vote for the winner in the two-wheel and freestyle competitions by real-time, in-stadium fan voting on their smartphones.

Events
#CWABG's "How Are We Curators of the Black American Experience Now?" on 3/25 at 7PM
303 views

Events
The Music Center & Grand Park Celebrate The Joys of the Season with Numerous Events This December
1,191 views