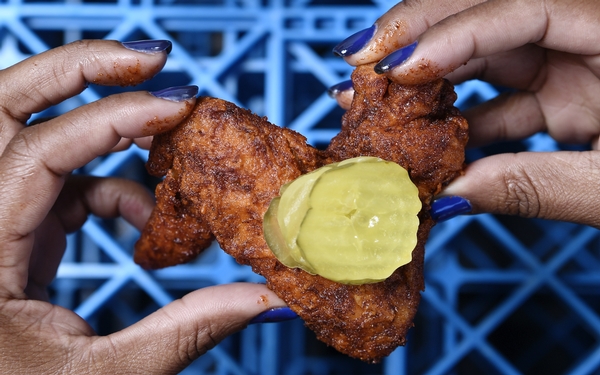 Kim Prince spent most of her childhood standing on the pickle buckets in flour-dusted shoes at her family’s hot chicken shack off Clarksville Highway in Nashville. She passed the time watching mountains of lard melt from white to orange as they cooked down in the biggest skillets she’d ever seen. When her mother and Aunt Andre weren’t looking, she plunged her fingers into the meringues of the pies, sneaking licks of the soft, sweet peaks. And she dozed on the restaurant’s big white benches, inhaling the smell of the spices in the air, lulled by the sound of grease popping off nearby pieces of frying chicken.

“Hot chicken is very much a part of the fabric and DNA of who I am as a Prince,” she said, seated at a table at the State Brewing Co. in Gardena, where she was holding a pop-up for her own fledgling hot chicken business, Hotville, on a recent Saturday morning.

Prince is the niece of Andre Prince Jeffries, the owner of the two Prince’s Hot Chicken Shacks in Nashville. The original shack is considered the birthplace of hot chicken, the palate-stinging, soul-enriching dish of spicy fried chicken.

You choose your level of heat when you order hot chicken — and, depending on the restaurant, the range goes from not-very-spicy to melt-the-bottom-half-of-your-face-off-and-use-gloves.

Hot chicken is typically served on top of a slice of white bread — designed to help your stomach and your mouth survive the heat — with a couple of sour pickles. It’s a dish that started with Prince’s great-great-uncle Thorton Prince decades ago and has since reached all corners of the globe.

But somehow, getting lost in the whirlwind success of hot chicken, is Prince. She’s still struggling to get her hot chicken business off the ground, despite being the only one with any ties to the family that started it all, and one of the few African Americans making hot chicken in Los Angeles. She’s also the person making chicken that most resembles the stuff you’ll actually find in Nashville.

“You can’t really harness the market and collect all the coins from anybody that wants to do Nashville hot chicken,” Prince said, seemingly untroubled that her family’s creation has spread far and wide while she works to open a restaurant.

“Somewhere around 2013, I opened up my big mouth and said we were scouting L.A., and that’s what sparked it,” Prince said. “And people beat us to the punch.

“I’m flattered by it,” she continued, but “I think money is definitely one of the drawing cards. It’s now its own food genre.”

Her hot chicken pop-up started in Chinatown two years ago and appears at various locations and breweries around L.A. She’s trying to raise money — passing around a collection plate and skipping a car payment or two — with the hopes of opening a permanent hot chicken spot.

You can track the origin of the hot chicken domino effect in Los Angeles to Howlin’ Ray’s, Johnny Ray Zone and Amanda Zone’s food-truck-turned-restaurant in the Far East Plaza in Chinatown in 2015.

For Zone, it was a trip to Prince’s in Nashville, where he was working at the time, that got him hooked.

“This is the perfect dish,” Zone said. He visits Nashville multiple times a year, bringing his staff to learn about the birthplace of hot chicken. “I had this epiphany where I was like, ‘I want to bring this to L.A. and do it through my lens and represent the city of Nashville in a light that’s true to how I see it.’ “

After Howlin’ Ray’s there was Dave’s Hot Chicken — the first of many Armenian-run hot chicken businesses. Dave Kopushyan, Arman Oganesyan and Tommy Rubenyan started it as a pop-up in a parking lot in East Hollywood in 2017.

He looked at recipes online to create his own version of hot chicken tenders but has never been to Nashville. He and his partners opened a restaurant last year and, like at Howlin’ Ray’s, there are frequently lines out the door.

Angry Birdz hot chicken owner David Mkhitaryan decided to open his Hollywood restaurant after trying Dave’s Hot Chicken. He serves his chicken tenders on top of rice pilaf — a recipe his father created at his Middle Eastern restaurant in the area — instead of white bread.

Elvis Abramyan and Virginia Tonoyan were the happy owners of a real estate company firm when they saw videos of Hattie B’s hot chicken challenges online a couple of years ago. After making hot chicken at home for friends, the two opened Blazin’ Hot in Montrose.

Dave’s, Angry Birdz, Raging Hot, Chips N’ Chicks, Hot Fried Chicken To Go, and Blazin’ Hot are all owned and operated by restaurateurs of Armenian descent. “A lot of people ask if all these hot chicken businesses are related,” Harut Haroutunian said. He operates the Chips N’ Chicks pop-up in a North Hollywood car wash with his younger brother and cousin. “But, we’re not. We just really like hot chicken.”

It’s not just the Armenian community getting in on hot chicken. Restaurant owner John Park and his chef Michael Pham were running an unsuccessful taco fusion restaurant in Chino Hills when they decided to close it and open a hot chicken restaurant called Hotties Nashville Hot Chicken this year. Park went from being $60,000 in debt to having lines out the door.

Prince, unflappable, sees this as a natural evolution in hot chicken’s arc.

“It’s not a color thing. Even though my family’s business started during a time when it was Jim Crow and very segregated, the history of it seems to be African American or a black thing, but that’s not what it was,” she said. “Literally, everybody ate Nashville hot chicken in the late ’30s, ’40s and ’50s. It didn’t matter what color you were.”

Diners in Los Angeles are now so used to the idea of hot chicken — and to ordering fried chicken with different levels of heat — that Christine Dane, co-owner of the Lucky Bird fried chicken stall at Grand Central Market, has to routinely explain to customers that its fried chicken isn’t hot chicken.

“On an average day, maybe 10 to 20 people will ask us what level the chicken is,” Dane said. She and her husband, Chris, do offer Buffalo wings and a Buffalo chicken sandwich, but that’s as hot as it gets.

Like Prince, Zone isn’t fazed by all the hot chicken copycats. “I just keep coming back to the Birdman thing,” Zone said, referencing the rapper’s 2016 song “Respek.” The chorus starts with: “Put some respek when you mention my name.”

“That’s been my key to success with Howlin’ Ray’s,” Zone said. “Doing it right in the sense of an understanding and representing that part of the South in a way that’s true to what those experiences are.”