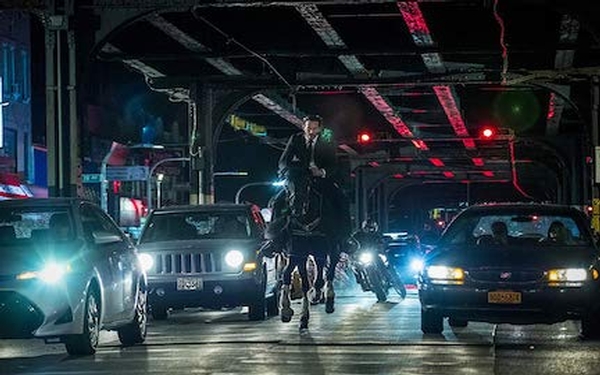 At this point, the words “John” and “Wick” used together signify something very specific. Mostly: sharply choreographed, creatively efficient violence. We know there will be a brooding Keanu Reeves killing dozens (only because he has to). There will be eye-popping stunts and a network of sharply dressed assassins. There will be gun fu. Does “John Wick: Chapter Three - Parabellum” break the formula? It most certainly does not. Director Chad Stahelski wouldn’t dare. But you almost wish he would.

The film picks up directly after the second film ends, with a bloodied John (Reeves) running through the streets of New York, moments away from being declared “excommunicado” from secret assassin society the High Table for killing in the Continental Hotel. With a $14 million dollar bounty on his head, everyone in New York wants to kill John Wick, so now John Wick has to kill everyone in New York with whatever he has on hand.

Like most “John Wick” movies, the first two acts of “Parabellum” are a thrill of adrenaline and originality, the fights and stunts dreamed up by former action choreographer Stahelski escalating to increasingly absurd and operatic heights. There is one jaw-dropping sequence with a book, and a scene with knives that renders all other knife fights meaningless. But like the other two “John Wick” movies, the third act is an interminable slog of violence that only leaves one feeling numb and number.

The film boasts four screenwriters — Derek Kolstad, Shay Hatten, Chris Collins, and Marc Abrams — which is surprising, given the lean story. The film feels more like Stahelski’s reel of stunt work, with a few growled lines of dialogue from Wick and some crisp bureaucratic mumbo-jumbo exchanged between the representatives of the Continental and a stern High Table adjudicator (Asia Kate Dillon), who has arrived to clear up the whole John Wick business.

There’s such a rich mythology in the eminently stylish Wickiverse, but “Parabellum” barely scratches the surface. We see a strange office, manned by rockabilly pin-up-style secretaries with arms full of Sailor Jerry tattoos shouting out status updates while chalking them on a board. What’s that all about? John, seeking shelter, heads to an old theater where Anjelica Huston marshals a combination ballet/wrestling school and indicates John trained there as a youth. But “Parabellum” frustratingly offers only morsels of the strange world that birthed him.

John Wick has an unstoppable will to live. He only kills when he has to, in self-defense. But when you’re the world’s best assassin, with a huge bounty on your head, a lot of people are going to try and kill you. What keeps him going? That question is answered, to poetic and tragic ends, when he says he lives simply to remember his wife and pup. Their memory lives in him, so if he lives, they live. That love keeps him going.

The startlingly emotional admission is the one thing that shakes up the predictable proceedings of “Parabellum,” and it matches the sorrowful soulfulness with which Reeves imbues his character. One can’t help but wonder if it’s inspired by the personal tragedies of his own life. In this ballet of bloodshed, this hail of headshots, this monsoon of murder, it’s easy to become desensitized. But Reeves always makes the more interesting choice — the harder choice — and he chooses to put the humanity of John Wick front and center.

Rated R for pervasive strong violence, and some language.