‘Non-Fiction’ is a smart and sassy French romantic comedy 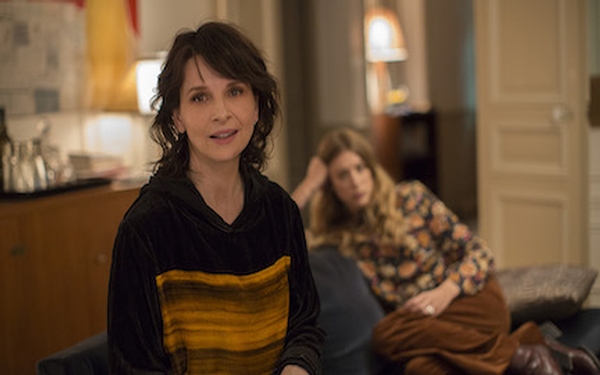 Brainy enough to merit major advertising in the intellectually rigorous New York Review of Books yet graced with the wit and charm of French romantic comedy, Olivier Assayas’ “Non-Fiction” is an enticing blend of the comic and the serious, a smart and sassy examination of the way we live now.

The veteran Assayas, one of France’s most prolific writer-directors, turns out all kinds of films. Though austere artistic rigor is his most frequent trademark, he also has a rarely indulged gift (visible here as well as in 2008’s “Summer Hours”) for bringing out the emotional richness inherent in conventional storytelling.

What makes “Non-Fiction” stand out is the adroit way it keeps everything in balance. The writing and the acting, the questions about contemporary society as well as personal relationships — they all exist in enviable harmony to create an incisive snapshot of the present moment.

It helps, of course, that Assayas has assembled a splendid cast, top-lined by an effervescent Juliette Binoche and a cool Guillaume Canet as Selena and Alain, a married couple with creative careers and romantic situations on the side.

Selena is a working actress, a regular on a popular French cop show who’s trying to decide if she can stomach signing on for another season, while Alain is the kind of polished book publisher who looks awfully chic with a scarf draped casually around his neck.

It is Alain’s literary world the film spends most of its time in, and it begins with his lunch with Leonard (a hangdog Vincent Macaigne), a novelist who’s been on Alain’s list before and hopes his latest work gets a publication slot as well.

As unkempt as Alain is elegant, Leonard is a shaggy and self-involved neurotic who, not surprisingly, specializes in what is known as autofiction, novels that are very much based on the specifics of the writer’s life.

It’s not only “autofiction” that gets name-checked in Assayas’ sharp script; there are passing mentions of binge-watching, adult coloring books, search engine optimization, on-demand book publishing, and even fake news.

Any movie that can reference both prolific romance novelist Nora Roberts and Giuseppe di Lampedusa’s magisterial “The Leopard” is covering a lot of territory.

But what makes “Non-Fiction” so involving is not its surface references but the way it manages to deftly explore some of the key questions of contemporary culture.

What are we to make of a world where there are more books but fewer readers, where the pressures to forgo print for digital are intense, where (oh, the horror) “the role of the critic as trendsetter has diminished”?

Has the internet freed speech or enslaved it? Is writing on Twitter writing? Are politics being held hostage by the online world? These questions, as well as the core dilemma of figuring out what matters in life, are parsed by smart, articulate people. What could be wrong with that?

Because these issues are explored in the context of a delicious French entertainment, the personal relationships between the characters are always front and center, and if you think those things are simple in a film like this, you have not been paying attention.

For the essential dynamic of “Non-Fiction” is that almost everyone is cavorting with someone other than their nominal partner.

Alain, for instance, is having a relationship with the attractive Laure (Christa Theret), his publishing house’s young and confident head of digital transition, someone who has never seen an Ingmar Bergman film, not even one, and considers tweets to be “modern haiku.”

Selena has a hunch that Alain is not being faithful, but she doesn’t worry about it overly much because she herself has been having an affair with, of all people, Leonard, the writer who mines his personal life for his novels, a situation which definitely makes things tricky at home.

Leonard, for his part, lives with Valerie (Nora Hamzawi, a French stand-up comedian in her first straight dramatic role). She is a committed leftist who works for a zealous politician and is so into her mission she can’t be bothered to cheer Leonard up when he needs it, which is often.

“We must choose the change, not suffer it,” one individual insists, words these characters try to live by, and not bad advice for the rest of us as well.