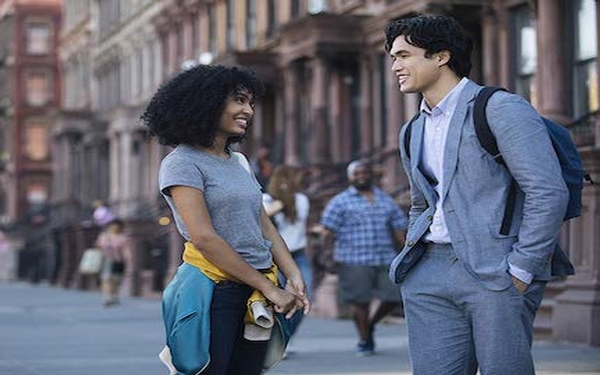 It’s an open secret in publishing that young-adult fiction has gone viral because card-carrying adults as well as younger folks are drawn to the genre’s purity of emotions and directness of action.

In the cinematic universe, the “Twilight” and “Hunger Games” franchises have benefited from that phenomenon, and now the sweet-natured but potent “The Sun Is Also a Star” is poised to join the list.

Based on a massively popular YA novel by Nicola Yoon, “Sun” unapologetically embraces deep-dish romantic fantasy (albeit with a bit of grit thrown in) and unashamedly exults in the most shameless coincidences imaginable. If that sounds noticeably lacking in irony, sarcasm and snark, it’s just going to have to be that way.

Adapted by “Girls Trip” co-writer Tracy Oliver and directed by Ry Russo-Young (“Before I Fall”), “Sun” benefits, as it would have to, from the shrewd casting of two charismatic young actors (both with TV bona fides) as its made-for-each-other stars.

That would be Yara Shahidi of “black-ish” and Charles Melton of “Riverdale,” who bring appealing youthful pizzazz to the roles of Natasha Kingsley and Daniel Bae, two New York City high school seniors who are fated — big emphasis on fate — to meet cute and fall madly in love.

On the day in question — and most of “Sun’s” action takes place on a single day — both Natasha (Tasha for short) and Daniel have separate but serious crises to deal with, with Tasha’s being the most immediate.

Though she dearly loves New York and has lived there for most of her life, Tasha, her parents and her younger brother are not in the city legally and are facing deportation back to Jamaica the very next day.

Daniel, the dutiful son of Korean immigrants, is getting ready for what his unrelenting mother calls “the ticket to the rest of your life,” his college admissions interview with a Dartmouth alum.

Daniel’s parents are stressing about the interview because they are determined to have their son go to medical school and become a doctor.

But Daniel himself, as the pictures of Tupac Shakur and Walt Whitman in his room hint, doesn’t want to be a doctor at all. He wants to be a poet, but as a dutiful son he feels he has no choice but to go along.

While Tasha and Daniel are united by facing uncertain futures, their attitudes toward the power and even the existence of love turn out to be diametrically different.

Tasha, with a career as a data scientist in her sights — though her real love is astronomy, which is where the title comes in — flat out doesn’t believe love exists.

Daniel, as a budding poet with an ever-present journal to prove it, lives for the idea of love and is given to saying things in all seriousness like, “Don’t forget to open your heart to destiny.”

In a less coincidence-prone world, Tasha and Daniel would never meet, let alone know each other’s thoughts on love, but “The Sun Is Also a Star” does not unfold in that world.

So when Daniel sees a beautiful young woman and notes with astonishment that she’s wearing a jacket emblazoned with the same phrase (deus ex machina, of all things) he jotted down in his journal that very morning, he’s convinced they are meant for each other.

“You can’t stop what’s meant to be,” he tells her. “The universe wants us to be together.”

Tasha, however, is not so easily convinced. She mocks Daniel’s belief in love and tells him that if you can’t use the scientific method on something, it’s not real.

Daniel counters by asking for a day to prove they are in love. Tasha, unwilling to reveal her immigration problems, says that’s impossible. Daniel settles for an hour, at least for openers, and the dance begins.

Director Russo-Young, whose roots are in independent film, has brought a bit of a welcome indie sensibility to the proceedings.

The same is true for cinematographer Autumn Durald Arkapaw, whose lively visuals include romantic shots of glistening skyscrapers that make us believers when Tasha exclaims “God I love this city.”

Screenwriter Oliver has done her part as well, pruning Yoon’s novel and even removing a few characters that were not deemed essential to insure everything moves along smoothly.

Among the more interesting choices are changing Daniel’s college of choice from the book’s Yale to Dartmouth and altering the name and ethnicity of the immigration attorney Tasha consults from Jeremy Fitzgerald to Jeremy Martinez (John Leguizamo handles the role).

Despite its fantasy trappings, “The Sun Is Also a Star” definitely retains is the seriousness of Tasha’s immigration dilemma. What will it take for love to prevail over the depredations of a predatory government? You’ll just have to show up to find out.