He couldn’t speak as a child; now this autistic student is giving a commencement address 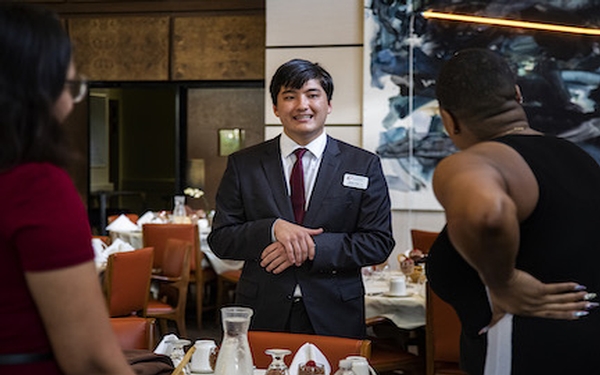 Bruno Youn, a senior at Claremont McKenna College, helps seat people attending a guest lecture by Symone Sanders ,right, a senior advisor for the Joe Biden presidential campaign, on May 2, 2019.

When Bruno Youn was 3 years old, his mother noticed something was off about her firstborn son. He could parrot what he heard. He could remember and recite poetry. But he could not string together words to communicate his own thoughts.

She brought him in for testing and learned the truth: He had autism.

“I could not cope with the idea,” said Josette Thompson, a Seal Beach physician. “I couldn’t have a child with autism. Never talk. Never have a job. Never get married. You lose all those dreams for your child at once. I couldn’t go there.”

She needn’t have worried.

On Saturday, Youn, now 22, will walk across the stage to receive his diploma at Claremont McKenna College. But before he does, he will stand before an audience of hundreds and do what his senior class elected him to do: deliver the student commencement remarks.

In four years at the small, highly selective liberal arts college in the Pomona Valley, Youn has grown from a freshman who avoided people, spending most of his time holed up in his dorm playing video games, into a campus leader.

He majored in philosophy, politics and economics, and will graduate with Phi Beta Kappa honors and a 3.8 GPA. He worked on policy research at Claremont McKenna’s Rose Institute of State and Local Government. He was selected for a prestigious post as one of two student fellows to host and moderate panel discussions with high-profile figures for the college’s Athenaeum speakers program.

He has worked with political campaigns. He has had a girlfriend and made lots of friends.

“I have left behind me a trail of broken stereotypes,” Youn plans to say in his commencement speech.

Youn’s success in academia is rare. About 1 in 59 children are diagnosed with autism and, of those, about a third have intellectual disabilities, according to experts. Among those without intellectual disabilities, only about half pursue college, with most attending community colleges and having difficulty transferring to four-year universities, said Susan White, a University of Alabama psychology professor who specializes in studying autism.

“A lot of times they are dropping out early or struggling with mental health,” White said.

Soon, this will present a challenge for the nation, she said. In what specialists are calling an “autism tsunami,” some 500,000 teens with the disorder will enter adulthood in the next decade — and need more services to help them succeed in the way Youn has.

“We are, on the whole, unprepared to help them function to their true potential,” White said. “We as a society need to do better.”

For Youn, academics were never a problem. He breezed through Los Alamitos High School with near-perfect grades and 13 Advanced Placement courses, nailing every test and becoming a class valedictorian.

But it hasn’t come easy, even when it looks that way. At a recent campus event, Youn wore a gray suit and maroon tie, and his hair was neatly parted and slicked into place, as he greeted the speaker of the night: Symone Sanders. The 29-year-old dynamo was national press secretary for Vermont Sen. Bernie Sanders during his 2016 presidential campaign and recently signed on as a senior adviser to former Vice President Joe Biden’s campaign.

“Hello, I’m Bruno,” he said, looking Sanders in the eye and shaking her hand. “Pleased to meetcha.”

He guided her to the front table, showed her the coffee bar and chatted about postgraduate plans. When he introduced her to the crowd of about 150 students, staff and faculty, he joked that Sanders bested him at hosting speakers because she introduced former President Bill Clinton at an event when she was just 16.

“My 16-year-old self would have shuddered at being at any kind of social luncheon with more than maybe two people,” Youn said, drawing laughs.

By the end of the night, however, he was exhausted. His condition limits his energy to socialize, he said. After maybe 2 1/2 hours, he needs to get away, drop his mask and relax alone.

Youn took two hours to write the two-minute introduction for Sanders, and managed the night by following a script in his head: Greet the speaker with small talk. Offer coffee or tea. Explain the evening’s program.

Without a script, Youn said, he would blurt out something awkward or unintentionally offensive. He can get tongue-tied, as he sometimes seemed at the Sanders reception.

The pressure to be more socially outgoing was a big reason Youn said he chose Claremont McKenna. From an early age, he had difficulty making friends and often felt “alone on an island.” He was determined to change that in college and thought the small campus of 1,300 undergraduates — compared to the 31,000 at the University of California, Berkeley, his alternative choice — would force him out of isolation.

“At Berkeley, I could vanish into the crowd very easily,” he said. “I knew I was throwing myself to the wolves by going somewhere like CMC. But I wanted to make it as easy as possible to make friends and get out of my shell.”

Jennifer Sandoval-Dancs, Claremont McKenna’s assistant vice president for admission, said the college enrolls just a handful of students on the autistic spectrum in each class of about 330 — and knows about it only if they share their condition. Youn wrote about it in his personal essay, she said, describing how he had to push himself to make eye contact and chat with people during a summer volunteer stint with Meals on Wheels. A breakthrough came when one man shook his hand and complimented his social skills.

“I remember how hard he had to work for things that others take for granted, how much strength he’s shown,” Sandoval-Dancs said, recalling some of the reasons his college application stood out.

Youn quickly caught the eye of John J. Pitney Jr., a professor of American politics, who invited him to be part of a group of 19 students in his honors government class. Pitney had just published a book on autism and politics, which Youn read.

“Each of us was intrigued by the other,” said Pitney Jr., who served as faculty adviser on Youn’s senior thesis about ways to revive the U.S. Office of Technology Assessment.

Youn, Pitney Jr. said, exceeded high expectations with his vigorous participation in class discussions in honors government, and research and writing skills that made his papers consistent standouts. In another class on Congress, Youn was able to work in a team and read and react appropriately to other people — social skills, Pitney said, not normally associated with people with autism.

The classes changed Youn’s academic trajectory from economics to government and public policy. They also helped lay the groundwork for his campus activities and friendships.

Melia Wong, a senior who met Youn in honors government and later worked with him at the Rose Institute, said his brilliance, humor and, at times, quirkiness endeared him to classmates.

“He represents the best of CMC,” she said.

Youn’s mother said she is thrilled by how much he has thrived in college. She still remembers being devastated when her son couldn’t attend preschool alone because he couldn’t follow directions, use the toilet or interact with other children. She hired an aide to stay with him and spent a “fortune,” she said, on therapy to help improve his speech, motor and social skills.

“I was dreaming he would be in good enough shape to work at a grocery store,” she said. “My dream for him now is to be an icon and trailblazer for people with autism who don’t know what their future will be like.”

Youn says he’s not sure what he’ll end up doing — he taught himself data science and machine learning, and is leaning toward a technology job in Utah. But he, too, hopes his journey can inspire others.

“For people on the autistic spectrum who are considering college, particularly extroverted places like CMC,” he said, “I think I’m proof you can fit in.”

Campus News
What’s the risk of COVID-19 for a healthy young person?
1,118 views