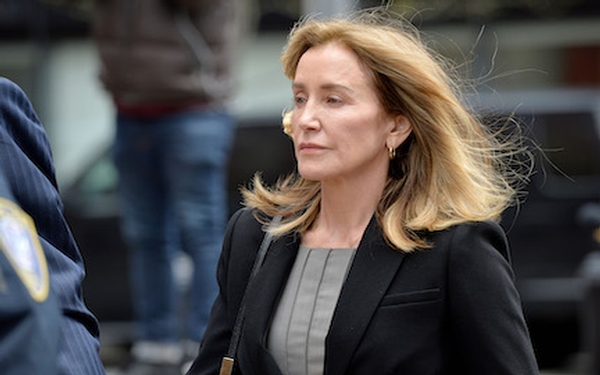 Actress Felicity Huffman is escorted by police into court, where she is expected to plead guilty to one count of conspiracy to commit mail fraud and honest services mail fraud.

Some figures in the college admissions scandal have vowed to fight federal charges, saying they did nothing wrong.

But others have admitted their guilt, including actress Felicity Huffman and William “Rick” Singer, the mastermind of the scam.

Here is a rundown of those who have pleaded guilty:

The self-described “master coach” is the mastermind of the college admissions scandal, prosecutors say.

He warned parents that in the scramble for a spot at an elite university, their children would hardly stand out without his help. He spoke of a “side door” to top schools he could wrench open to the “wealthiest families in the U.S.” He promised their children nothing short of “a life of success.”

Singer was paid $25 million by parents who, believing their children lacked the grades and test scores to get into elite universities, turned to the reputed college admissions guru who bragged of helping shuttle more than 700 students a year into top schools through “the side door,” according to prosecutors.

Singer, 58, pleaded guilty in Boston to charges of fraud, racketeering, money laundering and obstruction of justice.

The “Desperate Housewives” actress and Golden Globe winner pleaded guilty in a Boston courtroom Monday to a fraud conspiracy charge that has sent the actress’ reputation and career prospects tumbling.

In a mea culpa a month earlier, Huffman said she would not contest the government’s allegations and apologized to the public and her friends, family and daughter, who Huffman said knew nothing of the test-fixing scheme.

Stanford University’s former sailing coach, Vandemoer pleaded guilty to a charge of racketeering conspiracy and admitted in federal court to conspiring with Singer to slip the children of his clients into the elite university.

Meredith was the former Yale women’s soccer coach. He admitted pocketing bribes from parents and pleaded guilty to charges of fraud and conspiracy.

Prosecutors allege that between 2015 and 2018, Singer paid Meredith $860,000 to designate the children of his clients as recruited athletes, regardless of their athletic ability. Meredith was caught in an FBI sting after a father, whose daughter Meredith agreed to recruit in exchange for a bribe, learned he was being investigated for securities fraud and agreed to cooperate with the government, according to court records.

Riddell, prosecutors said, was Singer’s expert test taker. He would fly from his Florida home to testing centers in Vancouver, Canada; Houston; and West Hollywood. He ensured the children of Singer’s clients received whatever score on the SAT or ACT their parents desired, prosecutors say.

Among the tests Riddell fixed was an SAT taken by Huffman’s daughter, prosecutors say.

The Hillsborough, Calif., couple were the first to plead guilty in the far-reaching scheme.

The founder and CEO of a water systems company in Los Angeles, Sloane conspired with Singer to bribe a senior administrator at USC to admit his son to the school as a recruited water polo player. Sloane’s son did not play water polo competitively, but Sloane purchased a water polo ball and cap from Amazon in 2017 and worked with a graphic designer to Photoshop his son’s face and torso onto an image of a water polo match, according to the affidavit. He pleaded guilty to a fraud conspiracy charge.

Janke, 36, admitted conspiring with Singer to slip the children of wealthy and powerful families through what the Newport Beach college admissions consultant dubbed the “side door.”

The former USC women’s soccer coach crafted scores of bogus athletic profiles, littered with fake accolades and Photoshopped images purporting to show the children of Singer’s clients playing sports they did not play, which Singer used to ensure they were admitted to elite schools as student-athletes.

Janke was arrested March 12 after the U.S. attorney in Massachusetts unsealed an indictment charging her and 11 others with conspiracy to commit racketeering.

The Los Angeles executive was accused of paying $400,000 to secure his son’s spot at Georgetown as a tennis recruit.

Semprevivo, 53, pleaded guilty to conspiracy to commit fraud and honest services mail fraud in a Boston courtroom as part of a deal with federal prosecutors. As part of the plea agreement, prosecutors recommended a sentence of 18 months in prison, a fine of $95,000 and a year of supervised release. He is scheduled to be sentenced Sept. 11.

Campus News
Colleges campuses are trying to reopen in the fall. The main source of opposition? The faculty
135 views