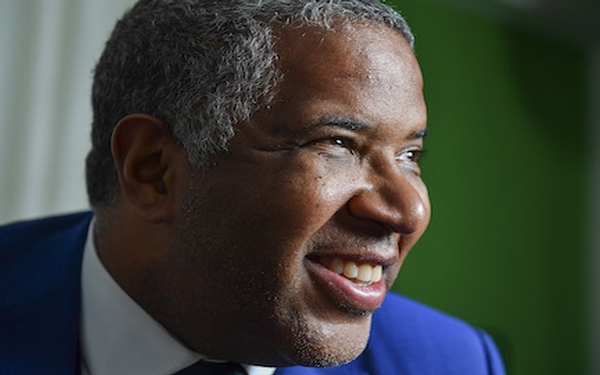 Portrait of billionaire philanthropist Robert Smith on Aug. 23, 2016 in Washington, D.C. Smith announced that his family was providing a grant to eliminate the student debt of the entire Class of 2019

But during his remarks in front of the nearly 400 graduating seniors, the technology investor and philanthropist surprised some by announcing that his family was providing a grant to eliminate the student debt of the entire Class of 2019.

“This is my class,” he said, “and I know my class will pay this forward.”

The announcement came as a surprise to Smith’s staff and to the staff at Morehouse, and elicited the biggest cheers of the morning.

Tonga’s husband, Charles Releford Jr., is also a Morehouse graduate. He said their younger son, Colin, is a junior at Morehouse. He doesn’t know who the keynote speaker will be at Colin’s graduation ceremony but is hoping for a return performance by Smith, who is chairman and CEO of Vista Equity Partners, a software and technology investment firm. “Maybe he’ll come back next year.”

Elijah Dormeus, a business administration major, said, “If I could do a backflip, I would. I am deeply ecstatic.”

A resident of Harlem in New York City, Dormeus, 22, was carrying $90,000 in student debt. His five siblings all came to Atlanta to see him graduate, along with his mother, Andrea Dormeus, who drives a school bus.

Of the debt, mother Dormeus said, “I wasn’t too worried, because my faith in God is really strong.”

Aileen Dodd, spokesperson for Morehouse College, said the gift is the biggest single gift in the school’s history.

In his commencement address, Smith said being on the bus toward success isn’t enough. “You want to own it, you want to drive it, and you want to pick up as many people as you can along the way.”

He charged the Class of 2019 with doing its part to improve the lives of black America. “I’m putting some fuel into your bus, “ he said. “I’m counting on you to load up that bus.”

Also receiving an honorary degree Sunday was Oscar-nominated actress and activist Angela Bassett, who referenced Morehouse graduate the Rev. Martin Luther King Jr. and suggested that the Class of 2019 might emulate him, but take their own path.

Campus News
Colleges campuses are trying to reopen in the fall. The main source of opposition? The faculty
36 views