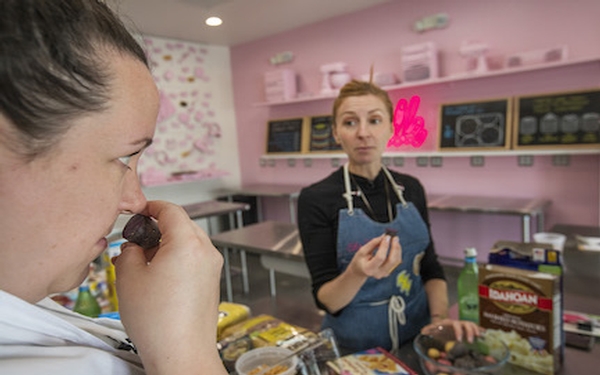 “I want some cheese crisps.”

“I want to go look at this Easter stuff.”

“This is the most magical place.”

Christina Tosi is rapid-firing as she enters Ralphs on La Brea Avenue and 3rd Street. She’s pushing a cart, zigzagging around the bakery section, locking eyes with every plastic-wrapped cookie, slice of cake and bag of mini doughnuts around her. The Milk Bar founder, responsible for turning cereal milk from a thing at the bottom of your breakfast bowl into an actual “flavor,” is on an inspiration expedition at one of her favorite places in the world: the supermarket.

“Who do you know who didn’t grow up on food from the grocery store?” Tosi asks.

She is flanked by Scotty Blenkarn, who runs the R&D Lab at the new Milk Bar location in Los Angeles, and culinary director Anna McGorman. The task: Figure out a way to turn Tosi’s famous Compost cookie (made with potato chips, pretzels, coffee and chocolate) into a pocket cake the size of a Dixie cup.

Despite Milk Bar’s success — the company now has 16 locations around the world — the team is constantly tasting through its menu and experimenting with existing recipes. They are attempting to not only keep up with customers intent on chasing the next Cronut or cake truffle, but also to regularly challenge themselves.

“The second that we stop playing around we are losing,” McGorman says.

“We’re going to get lapped,” Tosi interjects. “And getting lapped is kind of like competition with ourselves. We never want to come to work and be like, this feels old or boring or stale.”

Tosi and her Milk Bar team think about dessert the way psychologists analyze your behavior. You stuffing your face with sweets is not just about having a sweet tooth and, at Milk Bar, a cookie is not just a cookie. It’s a study in flavor, texture, sugar and joy: an idea that can take many forms. That’s why Tosi has a “lab” in both Los Angeles and D.C.; they are places where her staff spends days experimenting, tinkering and rethinking how flour, butter and sugar can be combined.

The pocket cake, a confection so small it can be consumed in just a couple of bites and actually fits into your shirt pocket, is one of the many creations to come out of the Lab. It’s developed over a month or so, then released to the public for about a week as a test run of sorts, and never to be seen again unless it makes it onto the permanent menu.

“Before we launch something in 16 stores, we get real-time data, feedback, understand the traction and understand how this works or doesn’t,” McGorman says.

The Los Angeles Lab is in the kitchen at the Milk Bar shop on Melrose Avenue. It’s a tiny, 4-foot-by-4-foot space in a production kitchen outfitted with tubs of rainbow sprinkles, trays of cooling cakes and piping bags full of frosting. The entire operation is visible through a window in the Milk Bar classroom, a space adjacent to the main sweets shop, where baking classes are offered.

After an hour at Ralphs, the three dump their spoils onto the classroom tables. Tosi rips open a bag of cinnamon sugar Pretzel Crisps, then classic Cheetos, Lay’s beer cheese chips, Twinkies, Oatmeal Creme Pies, Meiji chocolate mushrooms, three different sizes of pretzels, a box of mashed-potato flakes, honey sticks and oat flour. After tasting through every item on the table, the idea for the cake begins to take shape.

About two weeks later, Blenkarn and lab assistant Rikki Shapiro have created a prototype of the Compost pocket cake. The two had experimented with making the potato ganache out of the mashed potato mix but changed course after being put off by the texture of the instant stuff.

“Sometimes what we do is venture a little too far down the path,” Blenkarn jokes.

He and Shapiro will keep a potato element for the cake, but in the form of tiny purple potato chips made from baby fingerling potatoes from the farmers market. Those tiny potato chips sit atop a Barbie-sized layer cake covered in a blanket of smooth, shiny chocolate glaze.

“It just looks super-cute,” Blenkarn says of the cake. Although supermarket ingredients were the inspiration, they’ve been shot through the Milk Bar lens and turned into actual pastry kitchen creations. The result: Blenkarn decided to keep the corn cookie base and the butterscotch layer that the team discussed in their earliest prototyping talks and to top it with a toasted oat cake studded with mini chocolate chips and a vanilla bean custard. He added a coffee-spiked Italian buttercream with Compost cookie crunch in place of the initial ganache.

He and Shapiro couldn’t decide between a dark chocolate espresso or white chocolate glaze, so both versions will be available when the cake launches Thursday.

Although the cake mimics the savory-sweet notes in Tosi’s signature cookie, the tiny confection is a powerful sugar bomb with its own swagger. This seemingly makeshift Frankencake is the result of hours of testing, tasting and testing some more, and a chance for the team to continue to challenge itself to create the next dessert phenomenon, much as it did with its famous Milk Bar Pie (formerly Crack Pie).

Through these ephemeral desserts, the Lab manages to capture and convey a fleeting sense of wonder. And for that one week, when a new dessert is released, it’s a glimpse into a world where rainbow-colored anything is better and calories simply don’t exist.

“We are in the business of nostalgia and tapping into your psyche in a really light, beautiful, childlike way,” Tosi says.

To enter that world, just look for the bright pink neon LAB sign outside the Melrose shop. When it’s on, Lab is in session, and you can try whatever the team is working on. Blenkarn and Shapiro usually post new items on Instagram, or there’s the Lab hotline: (833) MILK-LAB.

The voice that greets you on the line is McGorman, who records a cover song ode to each week’s menu item. The Compost cookie cake’s theme song: N’Sync’s “Bye Bye Bye.”