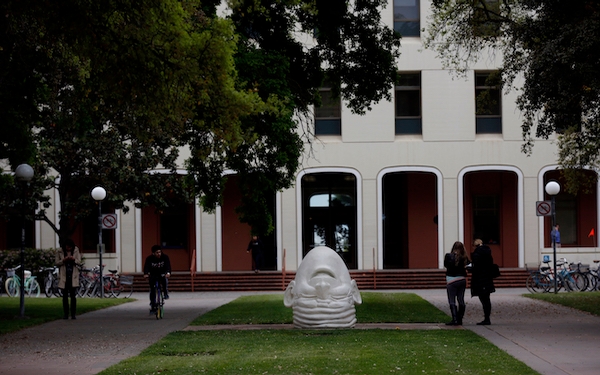 An egghead sculpture in front of main administration building on the UC Davis in Davis, Calif in 2017.

The University of California, Davis has suspended its Cal Aggie Marching Band amid an investigation into allegations of misconduct, the university announced this week.

The suspension comes after an investigation published by The Sacramento Bee that described “a raucous, sexually charged, alcohol-soaked culture” and allegations of hazing, binge drinking and sexual misconduct. The California Aggie, an independent student newspaper covering UC Davis, was the first to report the alleged misconduct.

“The Division of Student Affairs has placed the Cal Aggie Marching Band on interim suspension pending the completion of the independent review of recent allegations of misconduct,” Emily Galindo, interim vice chancellor of Student Affairs, said in a statement Wednesday.

Galindo said the UC Davis Cal Aggie Marching Band Alumni Association was placed on suspension in 2018 after misconduct allegations against one of its members surfaced. The Bee reported that alumni were banned from participating in band activities in December after receiving sexual harassment complaints.

In 1992, the marching band was placed on 10 months’ probation during a university investigation into reports of racism, homophobia, underage drinking, hazing and sexual harassment. The band’s director also filed a formal sexual harassment complaint in 2008 that accused students of inappropriate behavior.

A copy of that complaint obtained by the San Francisco Chronicle described several “ridiculous, disturbing and offensive” incidents, including band members stripping to their underwear during a road trip and drunken hazing episodes.

The group, also known as Band-uh!, will not be able to participate in any campus activities during the investigation. The band’s website says it has about 250 members.

“The university has launched an independent, comprehensive review by an external law firm to evaluate whether band members have been subject to conduct that violates university policy or any applicable laws,” Galindo said.

UC Davis also will determine whether band administrators failed to respond appropriately to reports of misconduct as well as review its policies and procedures within the Division of Student Affairs.

Campus News
In the Noah’s Ark of citrus, caretakers try to stave off a fruit apocalypse
293 views

Campus News
‘Adulting’ is hard. UC Berkeley has a class for that
831 views