Taron Egerton channels Elton John in ‘Rocketman,’ and the role is about to change his life 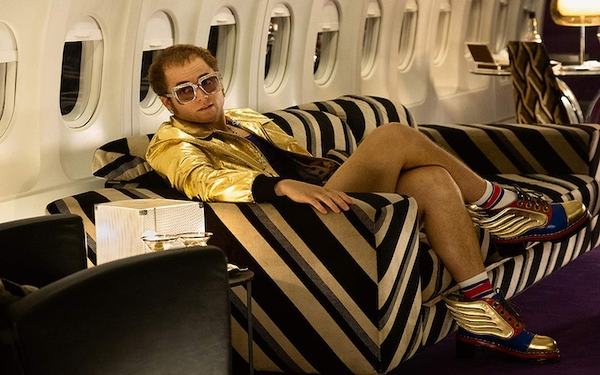 “Sorry for the delay,” Taron Egerton says, setting his iPhone on a table. “I can literally say that I had to take a call from Elton John.”

Little more than 12 hours have passed since the lights came up inside the Cannes Film Festival’s grandest theater, revealing the actor and the iconic musician he plays in “Rocketman” both in tears. The crowd around them rose to its feet as the two embraced, sobbing into the other’s shoulder. Then they migrated down the Croisette to a party on the beach, where the 29-year-old and the 72-year-old duetted together for hundreds of guests standing in their black-tie attire on the sand.

“It was just the perfect day,” Egerton says — one of the best of his young life. But he started it off anxious, walking into the Grand Thetre Lumiere with his breath high in his chest. He couldn’t relax for the first 45 minutes of the film, seated beside John as the performer faced depictions of emotionally turbulent years filled with parental neglect, sexual confusion and substance abuse.

“He only saw it for the first time yesterday, which is why I think he was so profoundly moved,” Egerton says. “He’s lived a life less ordinary, but it’s not been an easy life, I don’t think. So to see him, relive some of that and have such an acute emotional reaction? It’s an emotional thing for me.”

Hence the call from John just now, “taking a moment to be happy” over the resoundingly positive reviews that poured in overnight. After a long night of drinking beer, Egerton is now mainlining coffee in a hotel suite overlooking the waterfront where he performed hours earlier. His Tricker’s loafers, he points out, are coincidentally the brand’s “Elton” style.

He’s trying not to look at his phone, but it keeps lighting up. First came a text from Jamie Bell, who plays John’s songwriting partner Bernie Taupin in the film. “You’re my brother,” wrote Bell, who couldn’t make the premiere because his wife was about to have a baby. And there were a few from his mother, who showed him “The Lion King” when he was 5, the movie in which he first heard John sing.

“I’ve had some fab calls,” he acknowledges. “But you know, we’ve got a long way to go, and we don’t know how things are going to go.”

Indeed, no matter how splashy the debut, the timing of “Rocketman” is also nerve-racking. The film, which opens Friday in the U.S., comes on the heels of fall’s “Bohemian Rhapsody,” the Freddie Mercury biopic that earned an astonishing $900 million at the global box office. In February, Rami Malek earned a lead actor Oscar for his performance as the Queen frontman. And “Rocketman” director Dexter Fletcher had stepped in to finish production on “Bohemian Rhapsody” when that film’s credited director, Bryan Singer, was fired.

The comparisons are inevitable. And no matter how good “Rocketman” is, or how good Egerton is, does it arrive too soon for another portrait of a rock ‘n’ roll star to be fully embraced?

Egerton says he hopes the success of “Bohemian Rhapsody” proves just the opposite — “that there’s an appetite for this type of film.” And he’s keen to emphasize their differences: The Queen movie was a more straightforward portrait, where “Rocketman” is a musical fantasy that tracks John from boyhood to to his early 40s, when he gets sober. And while Malek gave a “wonderful performance” that felt like he “resurrected Freddie,” Egerton says, he was primarily lip-syncing the songs.

“Our film is a different animal. Hopefully we garner some of the same love,” he says. “We ain’t gonna make $900 million. I think everyone needs to adjust their expectations. That film is a unicorn.”

John and his husband, David Furnish, had been developing a “Rocketman” film for nearly two decades. The first actor officially cast to play John, Oscar nominee Tom Hardy, was not planning to sing in his own voice. But producers ultimately decided that Hardy, 41, was too old to believably play the singer in his youth.

“It’s also a musical, and Tom’s obviously probably the most gifted actor of his generation — and I think Tom knows this — but he ain’t a singer,” says Egerton, who counts Hardy as a friend. “He emailed me last week congratulating me and saying he felt that I was the man to portray the big man. Tom’s a class act.”

After the success of 2014’s “Kingsman: The Secret Service,” the action comedy starring Egerton as a cheeky agent recruited into an undercover spy organization, he wanted his next role to include singing.

Then, on the set of the 2017 “Kingsman” sequel, director Matthew Vaughn suddenly asked: “How would you feel about playing Elton?” Vaughn had just come aboard “Rocketman” to help John and Furnish get the long-gestating project off the ground. Coincidentally, the couple had just met Egerton for the first time on the set of the second “Kingsman” film, in which John made a cameo.

“The first thing Elton ever said to me was during a wedding scene we were filming: ‘You know, if I were five years younger, it’d be me that you were marrying there,’” Egerton says with a laugh.

After Vaughn advised them that the actor also had “the voice of an angel,” John and Furnish began seriously considering Egerton for the role. It helped, Furnish adds, that “he and Elton got on like a house on fire.”

John made himself totally available to the actor. During visits to the singer’s mansion in Windsor, England he asked the singer questions about his life.

“Sex, drugs and rock ‘n’ roll — everything,” Egerton says. “Because when you play someone, you have to know the beating heart of their experience. If you’re playing a drug addict, the world of addiction is not pretty. That’s a dark place, and I asked him a lot about it, because I felt it was important I know. And I have never asked Elton anything that he has been uncomfortable with. You cannot make that man blush.”

John allowed Egerton to read the diaries he’d kept in the 1970s and even gave him the first diamond earring he’d ever bought. The actor wore it during a pivotal rehab scene in “Rocketman,” coming to feel the jewelry was his “little talisman — my thing that made me feel close to him.”

The only time John ever weighed in on his performance, Egerton says, is when he first heard the actor’s takes on his songs.

“I f—ing love it. Stop trying to sound like me.”

Ultimately, Fletcher advised him to just sing the songs as best he could, without fixating on mimicking John’s voice precisely. From that point forward, neither John — who was reviewing dailies — nor Furnish — who spent a lot of time on set — gave Egerton any notes.

“There are moments in the movie where I’m screaming and shouting or doing lines of gear — moments that aren’t pretty,” says Egerton. “It’s tantrums and tiaras, man — it’s Elton John. There’s moments where you’ve got to see him lose his [mind]. If I thought too much about Elton watching it, I’d start to go, ‘God, is he going to hate the fact that I’m making him look crazy?’”

That John didn’t sanitize the screenplay is a “tribute to Elton’s bravery,” believes Egerton, noting that “we’ve all seen movies where the real-life protagonist who is still knocking around have made themselves look saintly.”

He also credits Paramount for not watering down a love scene between the musician and his manager, John Reid, played by Richard Madden. Though the sequence is brief and nonexplicit, its mere existence immediately generated headlines after the Cannes premiere: “‘Rocketman’ Blazes Trail as First Major Studio Film to Depict Gay Male Sex,” wrote the Hollywood Reporter.

“The fact that people write about it in that way means that it’s still a conversation. It wouldn’t be a conversation if it was a heterosexual scene, so it’s still important we push that boundary,” says Egerton. “ It’s two people falling in love and one person losing their virginity. I’m very proud to be part of a film that has handled that with humanity and integrity, rather than trying to sidestep it.”

As for the reports that Paramount forced the production to scale back the scene to make it tamer, Egerton insists that wasn’t the case.

While Egerton did attend an Alcoholics Anonymous meeting midshoot to better understand addiction, he says he tried not to get too caught up in the emotional turmoil of the character. He doesn’t subscribe to method acting — “Frankly, I think it’s indulgent nonsense” — and didn’t hide out in his trailer, getting into character.

Bryce Dallas Howard, who plays John’s mother, says she was impressed by the “high-wire act” Egerton pulled off immersing himself in John’s world while acting like a normal dude on set.

Even if “Rocketman” doesn’t make $900 million, it will likely have a big impact on Egerton’s career, an odd side effect of a film largely about the perils of fame.

“People are always saying, ‘You’re about to blow up.’ It’s not true,” he says. “Que sera sera, but I’m not going to become an overnight … A-lister. I would like to have autonomy over my choices creatively, and I like earning money. These things are fine. I want the movie to be a success, and of course I want me personally to be a success. Would I like to not be able to get on the bus without being hounded? No, I’m not interested in that at all. I don’t mind taking a selfie out now and then, but if I had to do as many every day as I did yesterday? That sounds like fun, but it … isn’t.”

Egerton would like to continue a steady but relatively slow pace of work. And he’s interested in further pursuing music. He says he feels most at peace when expressing himself through song — which is also how he connects with John, whose husband told Egerton: “The only time I don’t worry about Elton is when he’s on stage.”

No matter what, one thing is certain: Egerton and John are bonded for life. After the screening last week, Furnish says, he pulled the actor close and told him: “You’re an indelible part of our family, forever and ever.”

Interviews
James Bond producer: 007 ‘can be of any color’ but never a woman
1,238 views

Interviews
For Martin Scorsese, making ‘The Irishman’ was about ‘learning to die’
1,207 views

Interviews
Maleficent doubts her fitness as a mother. So did Angelina Jolie
781 views