Which of those vegan-friendly, meatless burgers is the best? 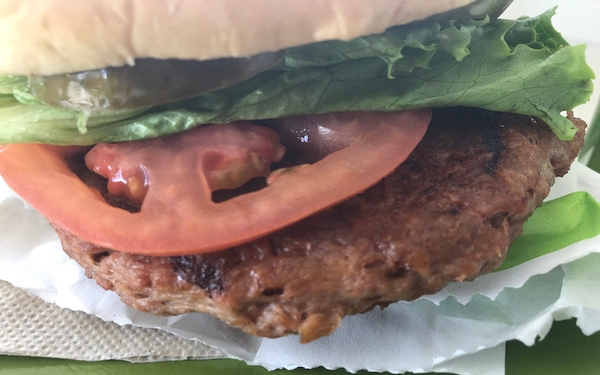 The Beyond Burger ($9.47) at BurgerFi features a faux-meat patty made from pea protein and has a brighter, more reddish appearance than the standard burger. (Michael Mayo/Sun Sentinel/TNS)

They seem to be swallowing America whole, with Burger King introducing the soy-based Impossible Whopper to South Florida stores earlier this month and Beyond Meat taking Wall Street by storm after going public May 2. Beyond Meat’s Beyond Burger, made from pea protein and coconut oil, is available at Whole Foods, TGI Friday’s and BurgerFi.

My quick take after a week of eating faux burgers, including an Impossible Whopper at Burger King and a Beyond Burger at BurgerFi: Some are getting better. Some are still meh. And some, like a beet burger with “Dijon veganaise” from Copper Branch, a Canadian-based vegan-cuisine chain that recently opened in Fort Lauderdale, are just dreadful.

The biggest surprise: Burger King executives weren’t kidding when they touted the Impossible Whopper as comparable to the original Whopper. In blind and open tastings, both I and my 13-year-old daughter preferred the Impossible Whopper to the meat Whopper. Perhaps that does not say much about the original Whopper. But the Impossible Whopper ($5.39), when covered with the usual lettuce-tomato-pickle-onion-ketchup-mayo, was enjoyable, with Burger King’s trademark flame-grilled flavor coming through. And when I ate the soy patty by itself, it had good texture and chew, and had better seasoning (with hints of garlic and paprika) and less unpleasant gristle than the real thing ($4.39).

Burger King eventually plans to offer the Impossible Whopper, with Impossible Burger patties made by California-based Impossible Foods, to all markets. The Impossible Burger’s faux-meat patty has come a long way since its 2016 introduction, with improvements and upgrades to taste and texture. Its latest version debuted in January, and it is now available at more than 5,000 restaurants nationwide, including Cheesecake Factory, Dave & Buster’s, Burger 21 and White Castle.

Beyond Meat, also based in California, has likewise tweaked its Beyond Burger since the product launched in 2013. Although the company has yet to turn a profit, it has seen its share price jump from an initial offering of $25 on May 2 to more than $80 a share Friday on the Nasdaq exchange. That puts the company’s value at nearly $5 billion. Impossible Foods is privately held and is valued at nearly $2 billion.

Investors are clearly bullish on a meatless future. Consumers and restaurateurs seem eager to embrace options that are seen as more ethical, better for the environment and perhaps healthier than real meat.

“As someone who cannot eat ground beef I really appreciate these substitutes,” Sarah Foundas, of Fort Lauderdale, Fla., wrote on the “Let’s Eat, South Florida” Facebook group page administered by the Sun Sentinel. “I hope the production can keep up with the demand.”

Wrote Andy Rogow of Oakland Park, Fla.: “There are people who would like to cut down on their beef consumption but still want the flavor and texture of beef … Both the Impossible and Beyond burgers are a gift for those of us wanting a beef experience without the environmental consequences.”

Raising cattle for meat production requires much energy, land and resources. Plant-based alternatives are viewed as more eco-friendly and sustainable.

“Demand just keeps growing,” says Paul Griffin, vice president of culinary for BurgerFi, a South Florida-based national chain that began offering the Beyond Burger three years ago. “I don’t think this is a fad — it’s here to stay.”

Griffin says the Beyond Burger accounts for nearly 5% of revenue at the chain’s 107 stores, and has sold better than expected. The Beyond Burger I ate at a Fort Lauderdale BurgerFi this week cost $9.47, and didn’t taste as good as the chain’s original beef burger ($5.97).

The Beyond Burger had processed flavor on the front end and an appearance that seemed more artificial on the bun, slightly brighter and more reddish than real meat. The texture and chew were OK. Since BurgerFi’s burgers are thicker and heftier than Burger King’s Whoppers, the artificiality of the Beyond Burger was more pronounced and harder to hide. BurgerFi typically serves the Beyond Burger with cheese, but I had mine without. Putting cheese on a vegan product seemed to go against the spirit of the enterprise.

“Sonic last year had a limited offering of a blended burger,” says Eric Davis of the Blended Burger Project. He noted that cafeterias at K-12 schools and colleges across the country have started using blended burgers. “It’s definitely a movement. Using mushrooms is a way to cut sodium, fat and cholesterol and add nutrients like B vitamins.”

Although vegans and faux-meat manufacturers like to promote meatless burgers as healthier, the reality is more complicated. Meatless burgers are lower in cholesterol and some are lower in fat, but nearly all are higher in sodium than beef. And some have similar, or higher, calorie and fat counts than standard beef burgers. And the ingredient list of these burgers can be long and confounding, reading like an organic chemistry lab textbook.

“I’m of the mindset that all this processing can’t be any better (or worse) for you than a regular old beef burger,” wrote Elizabeth Piteo on the “Let’s Eat, South Florida” Facebook group. “Face it — at this point with either the Impossible or Beyond — you’re not getting veggies. You’re getting a highly processed [product]. But if it makes you feel better to eat it or if you legitimately can’t eat meat, at least now you have options.”

With numbers like these, I’m sticking with real meat. In moderation, of course.

Tasting notes from a tour of meatless burgers:

Background: Developed by California-based Beyond Meat and introduced in 2013, Beyond Burger has become one hot patty. In 2016, it was the first plant-based burger sold in supermarkets. South Florida-based BurgerFi began selling it that same year. Made with pea protein and coconut oil, early backers included Bill Gates and Tyson Foods, which pulled its investment just before the stock went public May 2. The stock price has skyrocketed from $25 to $80 in three weeks.

Burger bite: The Beyond Burger gives a robust yet slightly artificial appearance on BurgerFi’s branded potato bun, reddish-hued and a little brighter than the standard beef burger. Eaten naked, the patty tastes processed on first bite and a little bland thereafter. The texture and chew felt like real meat, but it wasn’t juicy. When covered with toppings (lettuce, tomato, pickles, onion, mayo) it was edible. But nothing worth devouring.

Background: Founded by a Stanford biochemistry professor in 2011, Impossible Foods developed its soy-based Impossible Burger in 2013. A revamped version was unveiled in January and Burger King introduced the Impossible Whopper in St. Louis in April. South Florida was among the second wave of introductory markets in May.

Burger bite: The Impossible Whopper was virtually indistinguishable from the original beef Whopper, with similar appearance, texture and chew. Neither was juicy, cooked to medium-well for mass-market safety. Even when covered with toppings, the Impossible Whopper gave off the flame-grilled flavor that Burger King is known for. Eaten naked without bun, the Impossible Whopper patty had grill flavor and was well-seasoned, with hints of garlic and pepper. It chewed just like chopped meat, but without the gristle and gnarly bits contained in Burger King’s regular beef patty.

Verdict: Impressive for fake meat, it was better than the regular Whopper. Whether that’s a victory for the Impossible Burger or an indictment of Burger King’s regular Whopper is up for debate.

Available at: Copper Branch, a fast-growing “plant-based power food” restaurant from Quebec, with dozens of Canadian locations and others soon opening in New York and Maine

Background: Copper Branch was founded by Rio Infantino, a former Subway franchise owner and McDonald’s employee who turned to a plant-based diet after ballooning to 300 pounds. The first location opened in Montreal in 2014 and the chain plans to have 90 restaurants by year’s end, and perhaps 2,000 by 2029. The vegan restaurant features power bowls, soups, salads, sandwiches and burgers made from vegetables.

Burger bite: The signature Copper Burger features a purplish beet patty that also contains brown rice, pea protein, sesame seeds, organic hemp, sunflower seeds and lemon juice. A mound of overly sweet caramelized onions were on the bottom. The burger was topped by lettuce, alfalfa sprouts and splotches of Dijon vegenaise (which tasted like neither mustard nor mayonnaise, more like a condiment from the future dystopia of Woody Allen’s “Sleeper.”) There was a lot going on here, and none of it was good. Imagine a bad acid trip combined with a silo explosion at a 1960s hippie farm, and this is the burger that might tumble to the ground.

Verdict: Earlier this year, I managed to eat pig brains at a Taiwanese Hot Pot restaurant. Unfortunately, I was not able to swallow any of the Copper Beet Burger.

Eaten and prepared at: My home, purchased at Publix

Background: Boca Foods launched its vegetarian Sun Burger in Boca Raton in 1979, and the company was acquired by Kraft Foods in 2000. The brand survives in supermarket freezers, with its soy-protein and wheat-gluten faux-meat vegetarian burger (which contains cheese and other dairy products) and a vegan faux-chicken burger. Boca Burgers seem quaint and almost forgotten in this era of newfangled fake meat.

Burger bite: I bought the vegetarian burger and prepared it the recommended way, cooked in a skillet for 8 minutes. Instead of cooking spray, I used Kerrygold butter. I was surprised by how well the crust came out. Eaten hot on a potato roll the burger was crunchy and buttery and very pleasant, even without condiments or toppings. This seemed almost like any fast-food burger of dubious meat quality. Eaten naked without the bun, the exterior crust gave way to a slightly mealy middle with a processed flavor (oy, soy!). But when I threw it back on the bun, with some ketchup and Coleman’s mustard, I had a perfectly acceptable lunch.

Verdict: This was the throwback surprise of the week. The Boca Burger was eminently edible and definitely a lower-calorie and lower-fat alternative to real meat, even sautéed in butter.