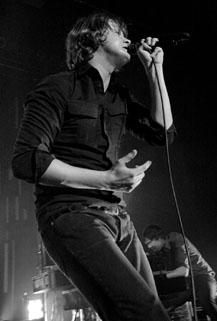 The saying goes that the jack-of-all-trades is a master of none. And yes, the members of Keane are indeed many things, but proverb-defying seems to be at the top of the list as the three Brits are nothing short of masters of their craft.

Deciding to give fellow limey art-rockers Muse a run for their money as the band that can create the biggest sound with only three members, Keane do it without using the traditional indie instruments. No guitars, no bass, not even a tambourine, just Richard Hughes on the drums, Tim Rice-Oxley on the piano and Tom Chaplin's awe-inspiring singing all congealing on stage to melt hearts and gnaw at emotions.

Playing songs off their latest release Under the Iron Sea and 2004's Hopes and Fears , there was no shortage of fans eager to sing along to (relatively) old favorites and start learning new ones. Between crooning more danceable tracks from their mainstream debut like “Everybody's Changing” and “This is the Last Time,” the band slowed to show the other end of its emotional spectrum with the more atmospheric tracks of Iron Sea .

Taking on a more solemn approach to the microphone for songs like “Nothing in My Way” and “Leaving so Soon?,” Chaplin made sure the band's new musical direction was distinguishable from its previous album without alienating fans of his soaring vocals.

The only place Chaplin proves he's still human, and not quite a higher being yet, is when pushing the upper limits of his vocal range, which sometimes aren't as entirely fluid as on albums. Maybe it's just the price to be paid for actually performing while singing, but for as naturally emotive as he is, a little crack here or there is entirely forgivable, if not more endearing. Considering Chaplin doesn't shy away from engaging his audience and isn't afraid to exert a little energy, he really is doing a lot on stage, making up for his two band mates being stuck behind immovable instruments.

While it makes great albums, the band proves when performing live that it doesn't put in anything less than all its effort and isn't too cool to bother with stage presence, something many similar bands are surprisingly lax on. Luckily, the members of Keane let their musicianship and their real personalities show through to connect with listeners. And taking into account what an eclectic mix their audience consisted of – from emo kids to 20-something hipsters to even older, normal, non-Hollywood types – that's truly a feat.

If ever there was a testament to the fact that Keane is not the stereotypical indie band to name-drop for elitist cred, let it be witnessed in the fact that they transcend scenes and subcultures and target demographics. They are proof positive that when bands just focus on making good music, the rest will take care of itself.