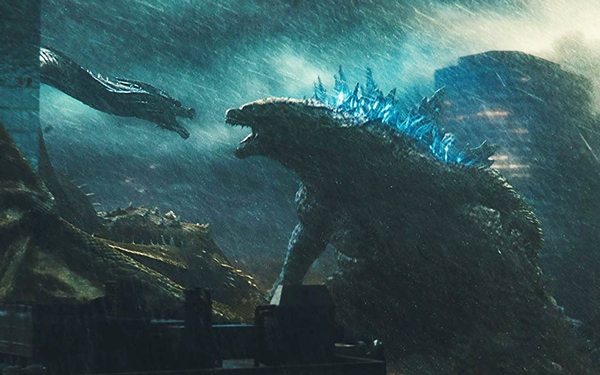 For “Godzilla: King of the Monsters” director Michael Dougherty, grabbing a big bowl of cereal and watching the Hanna-Barbera “Godzilla” cartoon on TV was a Saturday morning ritual growing up.

The same channel would also show a mini-marathon of the old “Godzilla” movies, which helped cement his love for the kaiju, but Dougherty admits that he doesn’t remember which of these classics was the first he ever saw.

“I started so young. I was 3 or 4 years old, so they all kind of blurred together at that point,” said Dougherty, who also co-wrote the Legendary/Warner Bros. release.

The sequel to the 2014 Gareth Edwards-helmed “Godzilla” was originally greenlighted with Edwards slated to return as director. By the time he left the film, Legendary had already secured the rights to include King Ghidorah, Mothra and Rodan in the sequel.

Dougherty jumped at the chance to include the three additional Toho kaiju that were available for his “Godzilla” movie.

“Legendary and Warner Bros. were great about letting me just do my thing and trust my gut. There wasn’t any mandate to use them,” said Dougherty. “But as soon as they said [the creatures were available], it was an easy yes. They’re icons. I wasn’t going to turn down that opportunity.”

This opportunity included poring over each monster’s design, which Dougherty admitted was his favorite part of the whole process.

“I was obsessive about making sure that every detail on the creatures was right [and was] probably driving my creature designers crazy,” said Dougherty. “When it comes to the creatures you have to look at everything: You have to look at their skin texture, their wings, their eye color. Every pore and scale is something that you can play with.”

Using his childhood passion as a guide, Dougherty wanted to make sure that the new designs were faithful to the previous incarnations of the creatures. But he was also mindful that not everyone would be familiar with the characters that were making their official Hollywood debut in “King of the Monsters.”

“The key to any good creature design is always the silhouette,” said Dougherty. “You should always be able to recognize your creature strictly from the silhouette, without having to rely on any extra details.”

Godzilla, Ghidorah, Mothra and Rodan got more than just visual updates: Dougherty also considered each creature’s personality and backstory to make sure they were fully realized characters rather than just giant monsters.

“What makes ‘Godzilla’ movies special is that these movies are asking you to emotionally identify and sympathize with nonhuman heroes and villains,” said Dougherty.

In addition to incorporating motion capture for some of the creature performances to give them a bit of a human quality, Dougherty followed the lead set by the Toho movies to fully consider what it meant to ask an audience to look at a giant radioactive lizard as the hero.

“There’s a certain sense of childlike wonder and imagination that permeated those movies that Western films never managed to capture,” said Dougherty. “There’s a willingness to get weird in the original Toho films. That was sort of the approach I took with this one. If we’re going to bring in a three-headed space dragon, a giant, glowing goddess moth and a really angry volcanic pteranodon, let’s just go big or go home.”

[Warning: Some spoilers for “Godzilla: King of the Monsters” follow.]

The nonhuman hero of the movie, Godzilla loses and reclaims his status as the alpha-kaiju — or “Titan,” in Legendary’s Monsterverse-speak — thanks, in part, to the actions of humans.

For the most part, Dougherty didn’t feel the need to change much from the 2014 Godzilla to create his king of monsters.

“I really loved what Gareth did in the previous film,” Dougherty said. “I loved how grounded it was, I loved his sense of scale and weight, and I loved his personality. It just felt real.”

However, “there’s a tradition in all the Godzilla films to sort of put your own unique stamp on the creature. He’s never the same in any two films,” explained Dougherty.

So the biggest change he made to Godzilla’s design was altering the spikes on his back.

Other small alterations in the design included giving Godzilla slightly bigger feet, as well as shortening and rounding out the end of his tail so it would resemble a club.

“Personality wise, I tried to just feel the character a little bit more and utilize close-ups every now and then just so that you get a sense of his internal thought process a little bit more,” Dougherty added.

For Dougherty, there was never a question that Ghidorah would be Godzilla’s nemesis in “King of the Monsters,” where he is also known as Monster Zero.

Ghidorah’s debut film, 1964’s “Ghidorah, the Three-Headed Monster,” which Dougherty described as “sort of the ‘Avengers’ of Godzilla movies,” saw Mothra, Godzilla and Rodan team up to take down the dragon-like beast.

“A lot of dragons that appear on the big screen or on TV shows like ‘Game of Thrones,’ tend to feel a bit more like European/Western dragons,” said Dougherty. “Ghidorah is unique because he feels like a traditional Asian dragon. I wanted to retain that.”

Dougherty looked to nature for inspiration on scale patterns and different shades of yellow to make sure that Ghidorah felt like “something that nature could have created.”

Ghidorah has a more malevolent personality in “King of the Monsters,” and motion capture was used to help make each head feel like its own character.

“The fun thing was figuring out the different personalities for each head,” said Dougherty. “The idea was the center head was sort of the alpha of the pack. He’s the one calling the shots and the other two are like younger brothers.

“One of the other heads is way more aggressive and ferocious and always looking for a fight. Whereas the other head is strangely kind of inquisitive and curious. I actually joked that head might not be so bad if it wasn’t for the other two.”

Unlike most other kaiju, Mothra has always been depicted as a hero. But despite being a fan of the character, Dougherty was initially reluctant about including the creature in the film.

“I was struggling with how to make a giant moth, a giant bug, cool,” said Dougherty.

But after researching many different kinds of moths, the director “learned very quickly that moths are amazing.”

“What really makes Mothra unique is that she is the lone female creature and she has always been worshiped as a very benevolent protector — a goddess — who has a strong connection to nature,” said Dougherty. “She’s a mother. She always lays eggs and gives birth to usually a couple different offspring.”

In addition to making her as beautiful as possible, she needed to be established as a protector who could hold her own against other monsters when necessary.

“I worked with the creature designers and my production designer, Scott Chambliss, and introduced bioluminescence into her design,” said Dougherty. “I’m fascinated with bioluminescence in nature. It made sense that she would have a way of using bioluminescence as a form of communication [and] as a way to make a really great entrance, or even as a potential weapon.”

It also made sense in the context of religious texts including the Bible that associate angels with rays of light. The idea was that in ancient times, those who saw Mothra flying and illuminating the sky could see her as some sort of deity.

But Mothra also needed design updates that would enhance her fighting capabilities. So Dougherty and his team looked to other insects including praying mantises and wasps for inspiration.

“If Mothra existed in a time when these giant creatures ruled the planet, she would need to be able to defend herself.” said Dougherty. “So we gave her the longer, sharper legs to use in the event that she ever needed to. In my mind, Mothra is never a creature that attacks unless she’s provoked.”

Of course, one of Mothra’s biggest surprise weapons is her stinger.

“Mothra has had a variety of bizarre weaponry over the years,” said Dougherty. “But I always wanted to make sure that the weapons we gave her were drawn from nature. So a stinger seemed like a natural idea.”

If “King of the Monsters” has a kaiju underdog, it’s Rodan. But don’t count out the dino-like flyer just because he doesn’t have as big of a cult following as his co-stars.

“Rodan was the first creature in the Toho universe that could take to the skies,” said Dougherty, recalling the creature’s 1956 debut. “He had so many great moments in his solo movie, which wasn’t really even a solo movie because the twist in ‘Rodan’ was that there were two of them. He had a mate.”

Dougherty’s reimagining of Rodan took significant inspiration from the stand-alone movie which saw the two Rodans fall into a volcano and die.

“The idea was, what if those two Rodans actually did successfully lay an egg in some volcano and over thousands of years, the creature hatched and somehow adapted to living in a volcano,” said Dougherty.

The new Rodan may look a lot like his standard incarnation, but his biology has evolved so that instead of reptilian scales, his body is composed of volcanic rock. He also has hot magma flowing through his veins.

“He’s a fun creature. He brings us a velocity and speed that you don’t normally get,” said Dougherty. “As great as Godzilla is, he has a lumbering, slower quality. But Rodan can reach supersonic speeds almost effortlessly.”

During the movie it is revealed that the Monarch agency is aware of 17 Titans and counting. But who are the others besides Godzilla, Ghidorah, Mothra, Rodan and Kong (whose presence is merely teased in the film)?

All of the other Titans that Ghidorah unleashed onto the world are original monsters created by Dougherty and his team. They took inspiration from the folklore of whatever region they were shown occupying in the map, such as one in Mesoamerica named Quetzalcoatl.

Although they did not design every single creature they named, one that does appear in the film, Behemoth, resembles a certain ice-age creature.

“It’s not exactly a woolly mammoth, if you look at it closely, because it doesn’t have a trunk,” said Dougherty. “He has a sort of ape-like body. The two forearms are a bit like a giant sloth’s, with massive claws that could take a good swipe at you if they had to.”

Another Titan, described as “a sort of aquatic, arachnid-looking creature” is a female monster drawn from Greek mythology named Scylla.

“It was fun to get to design completely new creatures,” said Dougherty. “We had thought about using some additional Toho creatures to give them some cameos but every Toho creature comes with a price tag.

“It was a choice to either shell out more money simply for the rights for these creatures to show up on screen for a few seconds, or embrace the opportunity and the challenge to create new creatures,” he continued. “What I’m enjoying and seeing is how these new creatures are sort of grabbing people’s attention.”