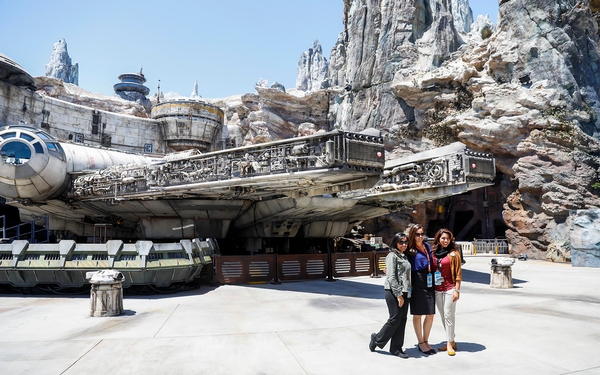 Here’s a familiar and effective design trick often used at theme parks: Corral guests under or through a passageway that forces the crowd to narrow before a grand reveal.

Think of Disneyland’s Main Street, U.S.A., where parkgoers are shunted through a passage under a train tunnel that gives way to a romantic, turn-of-the-20th-century town and a fantastical castle. At the entrance to Disney California Adventure’s Cars Land, an archway both shadows and frames the intricate yet massive hand-sculpted and rust-hued mountain range inspired by numerous Southwest landscapes.

Star Wars: Galaxy’s Edge, now open at Disneyland in Anaheim, Calif., is no different. The 14-acre land — the park’s largest expansion themed to a single franchise — will usher guests through its entryways from Fantasyland and Frontierland into carved tunnels that lead to grand reveals of the bustling Black Spire Outpost.

The obvious similarities between Disneyland’s past and its “Star Wars”-led future, however, will all but end there.

Envisioned as a busy, rugged space port, Black Spire Outpost’s sheer size and activity will provide an immediate contrast to Disneyland’s quaint, homey and protective feel. Forced-perspective illusions, designed to make objects appear larger, are needed sparingly here. A centerpiece of the land is a lifelike creation of the Millennium Falcon ship, which stands at approximately 100 feet long. On Rise of the Resistance, an attraction opening this year, an auditorium-sized ship hangar will drive home the point that guests are but one speck in a larger galaxy.

Throughout, we’ll hear the roar of spaceships and musings of war. But traditional theme park trappings — character meet-and-greets, passive rides and churros — won’t be found on Black Spire Outpost’s planet of Batuu (to reflect the rugged nature of the land, you’ll snack on turkey jerky).

Forget standing in line for a photo with Darth Vader; instead, you may find yourself attracting the attention of a bounty hunter, speaking to you not as a theme park guest but as a member of the “Star Wars” universe. Much of the non-essential signage will be written in the “Star Wars” language of Aurebesh, requiring a translation app to mimic the sensation of being a tourist on another planet.

And those who want to bring home a fancy, hand-built lightsaber need more than just a willingness to pay $200; the plan is to ask guests to provide a password to gain entry into the not-so-secret guildlike shop dedicated to saber-crafting.

INTO A NEW ERA

The Disneyland hype machine labels Galaxy’s Edge as the “most technologically advanced single-themed land ever.” Yet if it meets the vision of the Walt Disney designers who created it, Galaxy’s Edge won’t just put guests on an alien planet, it will lead theme parks into uncharted territory.

While part of an evolution that brought us the Wizarding World of Harry Potter at Universal’s Florida and Southern California parks and the “Avatar”-inspired land of Pandora at Walt Disney World’s Animal Kingdom, Galaxy’s Edge launches a new era of interactive theme park entertainment. If the largest criticism of theme parks is that they’re too expensive, to get the most out of Galaxy’s Edge, your desire to become an active participant — an actor, if you will, in a “Star Wars” narrative — will be as important as a working credit card.

“If you want to sit back and just watch the world go by that’s also fine, but I think one of the things that we know about our guests is they want more and more to lean into these stories,” says Imagineer Scott Trowbridge, whom Disney CEO Bob Iger described in a recent tweet as the “creator” of Galaxy’s Edge.

“They want to get closer to these characters; they want to participate more and not just be a spectator,” Trowbridge continues. “And so more and more we’re giving our guests opportunities to do just that.”

Galaxy’s Edge could be viewed as a contemporary interpretation of Disneyland’s original pitch. Its opening-day attraction Snow White’s Adventures — today known as Snow White’s Scary Adventures — famously lacked Snow White; instead, guests were cast in the role of the princess. It’s a move that led to confusion: Why isn’t Snow White in her own ride? How can a guest in a vehicle on a visible track be a protagonist?

Those going to Galaxy’s Edge in its opening weeks will no doubt be primed for a new kind of interactive experience. After all, they had the foresight to book advance reservations — long ago sold out — or a Disneyland Resort hotel stay required to see the land through June 23. But Disneyland, which attracts just under 19 million per year according to recent crowd estimates, isn’t just a place for early adapters.

Will the casual theme park family — those who spend hundreds or thousands yearly to simply be entertained at Disneyland or Florida’s Walt Disney World, which opens its own Galaxy’s Edge on Aug. 29 — be ready for a land that asks for audience participation?

The Millennium Falcon: Smugglers Run ride will depend upon it. Six guests at a time will be given a mission and assigned a role — two pilots, two gunners and two engineers. It’s a theme park ride designed for generations weaned on games. Guests will be asked to make fast friends with one another so they can play together — one pilot, for instance, will navigate the ship left to right while another will move the Falcon up and down.

While there’s only one outcome to the ride, there are variables based on how well the group works together. Smugglers Run isn’t just trackless, it’s user-directed.

“We’ve very intentionally made sure that we are play-testing with groups of people who are strangers that have a very different dynamic with one another,” says Asa Kalama, who has helped direct the interactive experiences of Galaxy’s Edge and was instrumental in the development of Smugglers Run.

“By the same token,” he continues, “we’re also designing the experience so that no matter how well or how poorly anybody performs each individual role, it doesn’t feel punitive. We want to make sure that everybody walks off feeling successful, that they accomplished the smuggling run.”

Success, though, won’t always be pretty. “The ship may be totally on fire,” Kalama says.

While Smugglers Run may be the most overtly interactive aspect of the land, the entirety of Galaxy’s Edge is designed as a sort of livable board game, and Imagineers are counting on guests wanting to roll their own dice. Shops such as Savi’s Workshop and the Droid Depot are pitched as theater where visitors can construct a $99 robot (not to mention that $200 lightsaber) and partake in various show elements.

Stormtroopers walking the land aren’t just there for photo ops — they may ask about your allegiance to the First Order and current villain Kylo Ren. And instead of parades, you’ll watch Disney’s staff — or cast members — behave as if they live on the planet. They’ll fix ships, fuss around their stores and may even gossip with guests about other Black Spire Outpost residents. Expect the land to come with its own lingo, and it’s been hinted that a resistance fighter or two may even ask visitors for help.

Disney public relations officials cringe any time the phrase “role-playing” is brought up, but Trowbridge has said the vision for the land is to allow guests to opt-in to gamelike experiences that fall somewhere between simplistic choose-your-own adventure activities and live-action role-playing, or LARPing, as it’s known.

“Not everybody wants to be a hardcore LARP-er,” Trowbridge says, adding that Disney has spent much of the last decade experimenting with how the parks can safely — and unobtrusively — allow guests to take on more active roles. One solution for Galaxy’s Edge is to embed many of the more overt game activities in the Play Disney Parks mobile app, which will house a multitude of exploratory quests, including a land-wide game for control of Galaxy’s Edge.

But giving guests a more active role is far from an exact science.

In 2014, Disneyland for instance introduced the live-action role-playing game the Legends of Frontierland. For several weeks, visitors were allowed to essentially battle for control of a fictional town set within the park’s vision of the Old West. Players could complete various tasks in the hopes of amassing little wooden tokens, “bits,” which could be used to buy land or bribe others. The team with the most land would win.

Today, Trowbridge describes Legends of Frontierland as a “spectacular failure.” The game’s economy system quickly proved troublesome. It lacked rules, and therefore players made their own. Trowbridge says guests were stealing latex gloves from food stands and blowing them up to create makeshift chickens in the hopes of selling them for bits.

“Guests were actually like, ‘Hey! Who wants to buy my chicken?’ ” Trowbridge says. “It was amazing to watch how much our guests wanted to play — that part was clear. But we also realized an in-game economy is a very tricky thing to manage. As an experiment, it was incredibly successful. As a prototype of ‘could we build this thing’ it was completely unsustainable.”

Galaxy’s Edge in its early days will also be something of an experiment. How deeply guests “lean into” its stories could have long-term ramifications for what we expect of a theme park. While it isn’t “Westworld,” it’s a nod in that direction, and if these interactive, light role-playing touches work, will Disneyland’s other lands start to more quickly show their age?

Or will the ambition to turn Galaxy’s Edge into a believable, real-world place go over the heads of Disneyland’s more mainstream customers — no doubt the bulk of those who visit? Experiences such as escape rooms and immersive theater may be popular today, but plenty still expect a show to unfold before them rather than to participate in one.

Disneyland, after all, must appeal to all palates. So to put it another way, will the Galaxy’s Edge cuisine of spicy sausages and turkey jerky eventually be replaced with hamburgers and churros?

“I mean,” Trowbridge adds, “we won’t know until we open it.”