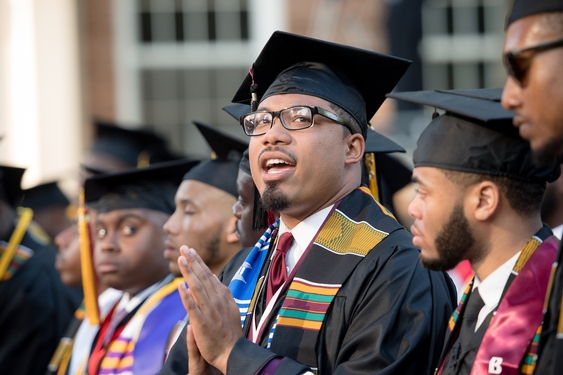 So how is this going to work?

That’s the question financial experts, students and others are asking after billionaire Robert F. Smith announced in a speech during Morehouse College’s commencement he’ll pay the student loan debt of each graduate in this year’s class.

Many education and finance experts and even Morehouse’s president have said they’re unaware of an offer on this scale to pay student loans. Donors typically offer scholarships. The initial estimate is it would cost as much as $40 million to pay off the debt. There were nearly 400 graduates, and some have said their student loan debts are as much as $200,000.

It could be complicated.

“My first thought when I heard about this on the news was ‘How is this actually going to work?’ ” said Scott Winkler, a CPA and certified financial planner who has his own firm, Winkler Financial Planning, with offices in Peachtree Corners and Roswell.

Morehouse, a private nonprofit college, has said it is working with Smith’s team on the logistics about his offer, which he described in his speech as a “grant.” Smith, whose wealth is estimated at $5 billion, donated $1.5 million to the college in January for scholarships and a park on the campus. The college was unaware of Smith’s offer to pay off the debt until he announced it.

Smith’s use of the word “grant” was likely intentional, said Kelly Richmond Pope, a CPA who teaches business courses at DePaul University.

A grant gives the donor greater authority over how the money is spent and is tied to a specific action or activity.

All agree giving the money to the students is not a sound option.

And potentially on the students.

If Smith gives the money as a grant, Morehouse could then pay off the student loans and issue a cancellation of debt to students, said Barron Barnes, CPA at Barnes, Merritt & Barnes, LLC in Sandy Springs. The students would then receive a 1099-C for the debt cancellation, which could then be considered income and subject to taxes.

But that approach leaves some significant questions.

“Would Morehouse be able to legally pay off the debt that is under the Social Security number of a student? I think that would be a violation of what they are allowed to do as an institution with a 501(c)3 tax-exempt status,” Barnes said.

Kemberley Washington, a former IRS agent who owns her firm in New Orleans, also mentioned the possibility of a 1099-C form to cancel the debt. She believes Smith and Morehouse will find a different approach.

Of course, any taxes would be substantially less money than the forgiven debt, Barnes said.

Under a different scenario, Barnes said Smith could gift each student enough money to pay his loan. That would allow Smith to give each student up to $15,000 before paying a gift tax. But the gift tax comes with a lifetime exemption of $11.4 million, so Smith would pay tax of 18% to 40% only on anything above that amount, Barnes said. (Those numbers would double if both Smith and his wife are the gift givers. Smith said in his speech that the grant is coming from his family.)

None of this even touches on the possible implications to parents who may have been taking tax credits for tuition over the past four years. If the money is not considered a gift, would the IRS then expect parents to amend their returns to reflect the changes?

“It will be interesting to see how they are going to structure it,” Barnes said.

Winkler, who has worked in the trust department at SunTrust Bank with charitable organizations, said another option would be for Smith to create a private equity fund and put the money there to pay off the loans. Winkler, though, noted it could take at least a year to set up the fund. Some students have said their first loan payments are due in June.

Regardless of how the money is disbursed, Washington said it will take time for the loan to be repaid. Some experts said the students may receive some form explaining the situation to the loan companies.

“It would take some strategic planning by Mr. Smith and the school as well,” said Washington, owner of Washington CPA Services LLC. “And when it happens, it will be a blessing to the students.”

Campus News
In the Noah’s Ark of citrus, caretakers try to stave off a fruit apocalypse
298 views

Campus News
USC offers free tuition to families making under $80,000 and a break for homeowners
192 views

Campus News
‘Adulting’ is hard. UC Berkeley has a class for that
845 views