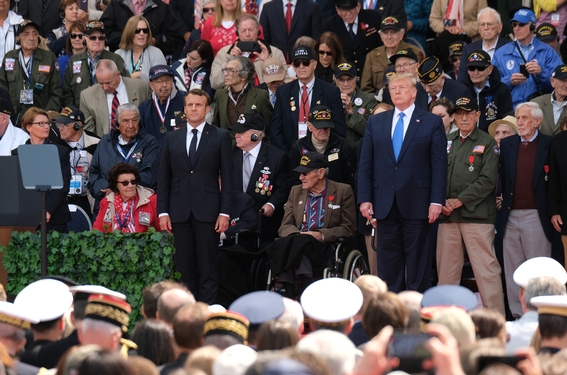 President Donald Trump marked the 75th anniversary of D-Day Thursday at the American cemetery above Omaha Beach, praising the courage and sacrifice of those who fought here and lauding the alliance that turned the tide of World War II and defeated the Nazis in World War II.

“Our bond is unbreakable,” he declared.

“On these shores, on these bluffs, on this day 75 years ago, 10,000 men shed their blood and thousands sacrificed their lives for their brothers, for their countries and for the survival of liberty,” Trump said. “Today we remember those who fell, and we honor all who fought right here in Normandy. They won back this ground for civilization.”

Trump’s sentiments resembled those of his predecessors who spoke here on previous anniversaries. Unlike them, however, he has frequently disparaged U.S. alliances and questioned the continued usefulness of the institutions, including NATO and the European Union, that grew out of the World War II victory and have helped give Europe its longest period of peace in centuries.

For the day, however, he and French President Emmanuel Macron, who also spoke, put aside those arguments.

With 35 D-Day veterans, now in their 90s, on hand, the two leaders praised the soldiers who stormed the beaches here and expressed, as Trump said, “undying gratitude.”

“You are among the greatest Americans who will ever live,” Trump told the veterans. “You are the glory of our nation, and we thank you from the bottom of our hearts.”

Macron, who delivered his speech in French, addressed the veterans in English.

“We know what we owe to you veterans: our freedom,” he said. “On behalf of my nation, I just want to say thank you.”

Even in their celebratory remarks, however, current tensions lay just below the surface. Macron made a point of reminding the crowd that French troops also played a role in the invasion and eventual liberation of France from the Nazis.

French fighters, Macron said, “were able to pave the way” for Allied forces.

And the U.S., Macron said, while Trump sat with arms folded behind him, “is never greater than when it is fighting for the freedom of others.”

He reminded Trump that the Atlantic Treaty and the EU grew out of the Allies’ victory in World War II.

“The lessons of Colleville-sur-Mer are: liberty and democracy are inseparable,” Macron said.

Trump’s nationalist, “America First” approach has tested the strength of the U.S. relationships with NATO and longstanding allies, including Britain and France.

He has withdrawn the U.S. from multilateral agreements, shown a disinclination to stand up to Russian President Vladimir Putin, who seeks to weaken the European bloc, and expressed an affinity for anti-democratic populists and Euro-skeptic Brexiteers in Britain.

But on this sunny Normandy morning, speaking just steps from the graves of nearly 10,000 American servicemen killed in the D-Day invasion and subsequent military operations, Trump celebrated the alliance.

“To all our friends and partners — our cherished alliance was forged in the heat of battle, tested in the trials of war and proven in the blessings of peace,” he said. “Our bond is unbreakable.”

Trump concluded his speech by asserting that America is “stronger than ever before” and thanked D-Day veterans one final time.

Trump and Macron took the stage together, along with their wives, around 11:30 a.m. local time and shook hands with the veterans seated in the first row on the stage. Several shouted words of encouragement to Trump as he made his way down the row.

“I know a lot of people in Pennsylvania who want to vote for you,” one called out loudly enough to be heard by those sitting close to the stage.

Following the ceremony, which included flyovers by U.S. and French planes, Trump is set to fly over historic Point du Hoc, where Army Rangers scaled cliffs on d-Day to capture German artillery. He and Macron are scheduled to meet in Caen in the afternoon.

It is the second day of D-Day commemorations for Trump, who took part in a ceremony Wednesday at a British naval base in Portsmouth, the point of embarkation for many of the U.S. and British forces that stormed the beaches of northern France.

Even on such a historic, somber occasion, the president’s focus wasn’t completely on the anniversary.

Prior to departing Ireland, where Trump chose to spend two nights at a golf resort he owns rather than stay in Normandy, he spoke with reporters on the airport tarmac to attack Democrats on immigration and to threaten Mexico and China with additional tariffs.

“We’re getting 25% on $250 billion,” Trump said, referring to existing tariffs on China. “And I could go up another at least $300 billion, and I’ll do that at the right time.

The D-Day ceremony marked the last big event of Trump’s five-day European swing, which began Monday in London. The president is scheduled to fly back to Washington on Friday.

Campus News
In the Noah’s Ark of citrus, caretakers try to stave off a fruit apocalypse
306 views

Campus News
USC offers free tuition to families making under $80,000 and a break for homeowners
199 views

Campus News
‘Adulting’ is hard. UC Berkeley has a class for that
863 views