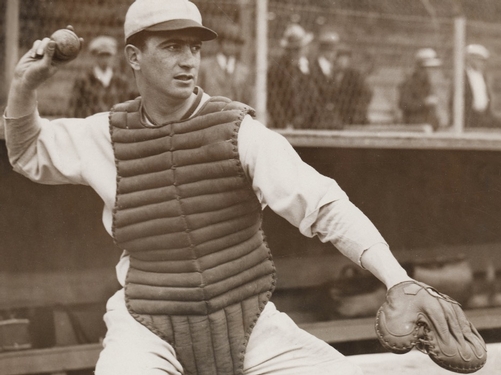 They don’t make baseball players like Moe Berg anymore. Judging by Aviva Kempner’s authoritative and engrossing documentary “The Spy Behind Home Plate,” they likely never did.

Known as “the brainiest man in baseball,” Berg spoke numerous languages, studied Sanskrit at the Sorbonne and during his 15 years in the major leagues liked to travel with a suitcase full of newspapers, books and magazines.

Berg somehow found time to get a law degree at Columbia, and, though not especially gregarious, had an intriguing mixture of friends and acquaintances, including Ian Fleming, Albert Einstein and Chico Marx of the Marx Brothers. He was, said sometime roommate Dom DiMaggio, “a very complicated individual.”

And none of that touches on the most compelling part of Berg’s story, his tenure as a significant World War II spy for the OSS, the precursor to the CIA, someone who was given both a weapon and a cyanide pill before one particularly arduous assignment.

Berg’s exploits have attracted media attention before, including Nicholas Dawidoff’s nonfiction book “The Catcher Was A Spy” and the Paul Rudd-starring dramatic film that it inspired.

But Kempner, whose previous docs include “The Life and Times of Hank Greenberg” and “Rosenwald,” has done an exceptional job of assembling her sources.

First off, she has personally interviewed anyone who might know anything about Berg, including veteran sportswriters Ira Berkow and Larry Merchant, Los Angeles Angels manager Brad Ausmus and former Baseball Commissioner Bud Selig.

Kempner also arranged for use of interviews with some of Berg’s former baseball teammates as well as former CIA Director William E. Colby, all done by filmmakers Jerry Feldman and Neil Goldstein for a never-completed documentary.

Determined not to drown in talking heads, Kempner and her editor Barbara Ballow have made adroit use of both stock footage and Hollywood spy movies such as the Alan Ladd-starring “O.S.S.” and Gary Cooper’s “Cloak and Dagger.”

Berg grew up in Newark, N.J., the son of Jewish immigrants, and much to his father’s disgust, took to baseball early. He played undergraduate ball at Princeton, where the yearbook noted that he was “a Hebrew,” and he ended up playing for five clubs, including Brooklyn in the National League, and Chicago, Cleveland, Washington and Boston in the American.

Though he started as a shortstop, it was as a catcher that Berg found his stride, even writing an article for the Atlantic on the pitcher/catcher relationship in which he compared the catcher to “the Cerberus of baseball,” with eyes on everything.

Berg also caused a sensation when he appeared on the radio quiz show “Information Please,” a newspaper headline noting that this “walking encyclopedia startles radio fans as he has Red Sox teammates.”

Most authorities agree that Berg likely engaged in espionage-type activities even prior to the war. When he accompanied players such as Babe Ruth and Lefty Grove on a goodwill tour of Japan in 1934, he donned a kimono (there are photos) and clandestinely filmed a panorama of the Tokyo skyline that may have ended up aiding Army Air Forces Gen. James H. Doolittle on his famous raid years later.

Once Berg was recruited for the newly formed OSS, his most famous assignment was to track down nuclear scientist Heisenberg, determine how far Germany had gotten in making an atomic bomb, and kill the man on the spot if he felt the danger was there.

Despite the bold nature of his exploits, Berg was apparently a difficult man to get a bead on. Photographs and brief newsreel footage show a completely serious, extraordinarily self-possessed individual, someone who fit sportswriter Shirley Povich’s description of being “a man apart, different from the others.”

Still, one has to agree with sportswriter Merchant when he asks in genuine astonishment: “Has there ever been a professional athlete who had that kind of reach in his life? Can you make that up?” No, you can’t, and thanks go to filmmaker Kempner for putting all the pieces together in such a satisfying way.