Cryotherapy means standing naked in a chamber at -240 degrees. We gave it a try 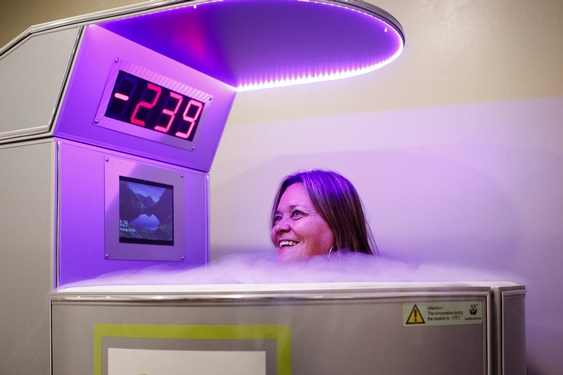 Amy Bateson stands in a Cryotherapy chamber while the temperature is lowered to negative 239 degrees Fahrenheit at the Andersonville cryotherapy and athletic recovery center Thursday May 30, 2019, in

Back in my days as a Division I women’s basketball player, many post-training sessions and practices ended with dips in the cold tub.

We’d muster up the energy to strip down to our compression shorts and slip into the shallow square pool, with temperatures typically around 30 degrees Fahrenheit. About 10 minutes later, 15 minutes on the brutal days, we’d emerge from the water, feeling OK enough to do it all again the next day.

As adulthood has tried to turn me into a NARP (Non-Athletic Regular Person; yes, this is what student-athletes call you behind your back), I’ve learned that even though my workouts have become shorter and less intense, I still need to properly recover.

I learned about the growing trend of whole body cryotherapy, a treatment technique in which the body is exposed to extremely low temperatures for a limited time, and thought it would have similar effects and benefits as the cold tub.

My typical workout regimen consists of three lifting days and two cardio days, so I planned to do the sessions post-workouts.

HOW DOES A SESSION GO?

When I arrived for my first treatment, I filled out a consent and physical readiness form, and once I was approved, Glenn Sieverson, owner of Andersonville Cryotherapy, gave me a quick rundown on the procedure.

Afterward, I went into one of the changing rooms and removed all clothing and jewelry from the neck down and put on a robe. Women can enter the cryochamber naked, while men have to wear underwear.

Cotton socks and gloves were in the room, too, and I put those on also. Once in front of the cryochamber, Sieverson gave me slippers and heavier gloves to put on over the others.

I stepped into the chamber on a slightly elevated floor, and with only my head showing, I took off the robe and handed it over the top of the chamber.

The chamber filled with nitrogen gas, and the temperature steadily dropped, eventually getting down to negative 240 degrees Fahrenheit. I stayed in for the maximum three minutes.

WAS IT SUPER COLD?

I mean, yes, but it was totally bearable. I think it helped that the temperatures gradually decreased, as opposed to immediately jumping into a freezing chamber.

Sieverson had to watch me and the tank while I was in it. He — along with an employee and my fiancé — kept me chatting, so that I didn’t only focus on the frigid air.

HOW DID YOU FEEL AFTERWARD?

Once my three minutes were up, I felt like a boss — negative 240 degrees couldn’t faze me! Sieverson explained that was likely the surge of endorphins and newfound burst of energy talking, both benefits of whole body cryotherapy sessions.

“Gives you the same energy as coffee — without the jitters,” said Sieverson, who thinks cryotherapy is “quite a powerful tool.”

Sieverson said to watch if my sleep got better, if I felt hungrier and if I had more energy. I was two for three — my sleep schedule is a nightmare, so that stood no chance — but I was like the Energizer Bunny for the rest of the day and happy to feel hunger quickly return after meals (yay, more snacks!).

My three-pack session was part of an ongoing special and cost just $89 total. The standard starting price for whole body cryotherapy in Chicago is about $60 per session, but you can usually get them in packages of five, 10 or monthly.

DID IT REALLY HELP, OR IS IT JUST A PLACEBO?

As far as recovery from my weight and conditioning workouts, I do feel it enhanced the recuperation and healing process.

Darren Hancock, owner of Chicago Sports & Chiropractic Medicine, told me after my sessions that whole body cryotherapy is nothing like a cold tub because they have different methods of cooling.

“In a cold tub, you can only get to a certain temperature in the water,” he said, “whereas in these cryochambers, the physiology of the whole body changes because the whole body is being stimulated to provide a healing effect.”

Hancock said there is evidence to show that whole body cryotherapy helps with inflammation, recovery and pain control, but overall, it’s “not the home run people think it is.”

IS IT ONLY FOR PEOPLE WHO WORK OUT?

Sieverson mostly sees people who work out, he said, like marathon runners, triathletes and personal trainers, but he also sees many people who suffer from chronic pain.

Hancock is on the fence about whole body cryotherapy because it needs more research and science, he said. But he does prescribe it in certain circumstances.

“If you have an inflammatory issue,” Hancock said, “then whole body cryotherapy might be an option.”

Sieverson welcomes all people to try it out. “If you pulled a muscle gardening, come see me.”