The Subways: Get Back on Track 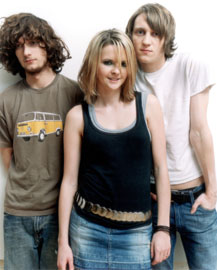 Given the warm reception the Subways received during a U.S. club tour earlier this year to promote their striking Young for Eternity debut disc, the highly touted U.K. indie-rock act seemed on its way to cracking the always-tough American market.

But when the young trio returned to London, 21-year-old singer Billy Lunn was diagnosed with nodules on his vocal chords, forcing the Subways to cancel several big gigs in North America and Europe, and threatening to derail a very promising career.

The band crossed its fingers and hoped doctors' predictions of a full recovery in two months would come true.

Recently Lunn was given the go-ahead to sing, and the relief is evident in Cooper's voice when the 19-year-old musician says, “Looks like we're on track,” during a phone chat from London a day before the Subways were to fly to America and begin touring again.

The former was written after the Subways returned to England following a much-noted appearance on “The O.C.” in November to perform the catchy single “Rock & Roll Queen.”

“‘California' is about being in America for the first time, and the new experiences you have and how you deal with them,” notes Cooper.

Cooper, a fan of “The O.C.,” says the Subways were invited to play by the show's music director. “We were touring around the UK and had a few days off. He asked if we wanted to come out to L.A. and play. We said, ‘Yeah.' It was a fantastic experience watching them filming the actors' lines while we were playing. It was like being part of a proper film.”

Both “California” and “Shaka Shaka” are on the fast side, Cooper adds, and reflect the music the band has been listening to. “We've been listening to a lot of heavier music,” she says, naming Swedish hardcore band Refused and noise-rockers Sonic Youth.

On disc, Cooper's vocal contributions are used to soften or accentuate Lunn's singing, which can be winsome and melodic one moment, jolting and shrieking the next.

“I took a lot of encouragement before I would sing,” says Cooper. “I didn't know what kind of noise would come out of my mouth.”

Now she feels more confident. “In the future, I may be singing a bit more, if it is appropriate.”

Young for Eternity is currently available. The Subways will perform July 19 at Long Beach Arena, in Long Beach and Aug. 9 at the Troubadour, in West Hollywood. For more information, visit www.thesubways.net.