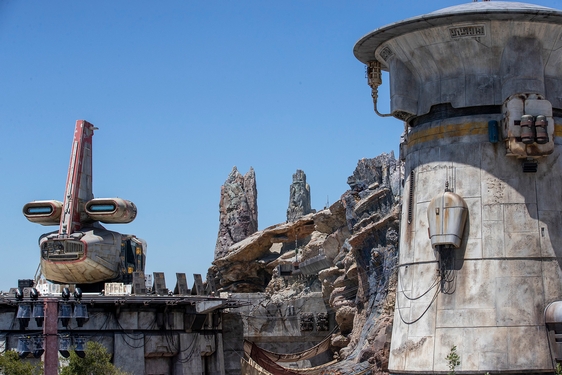 Media members get a preview during the Star Wars: Galaxy's Edge Media Preview event at the Disneyland Resort in Anaheim, Calif., on May 29, 2019. (Allen J. Schaben/Los Angeles Times/TNS)

Disneyland has long had games in its parks, from a shooting range in Frontierland to what is essentially a collection of mini video games in Disney California Adventure’s Toy Story Midway Mania. But never before has a Disneyland attraction been the sort of large-scale, walk-in and user-malleable arcade game that is Millennium Falcon: Smugglers Run.

Opening on Friday as the sole ride in Star Wars: Galaxy’s Edge, the largest-ever expansion in Disneyland themed to a single franchise, Smugglers Run puts six players in the cockpit of the Millennium Falcon, the ship made famous by Harrison Ford’s Han Solo in the original “Star Wars” trilogy.

We see some familiar faces — film fans will recognize the oversized furball that is Chewbacca, who appears on screen, and those versed in the animated works of “The Clone Wars” and “Rebels” will know that the ride’s mesmerizingly fluid audio-animatronic is Hondo Ohnaka, a scoundrel-smuggler who sets the ride in motion.

But story details later. Here’s what you need to know: Smugglers Run plays out like a more intimate and cooperative version of Star Tours. Those prone to motion sickness will be pleased to know it’s not in 3-D, but the worse you and your five companions do on your mission, the more rocky and turbulent the ride will become.

Also, if you’re not versed in video games, prepare for an unstable ride.

Thrill seekers, then, may want to steer the Falcon straight into asteroids, but if you bang up the ship too bad it will become clear to the video game engine driving Smugglers Run that you’re not fit to control it. But you have to be really, really bad: Of my three rides on this particular afternoon, all part of the grand media unveiling of Galaxy’s Edge, only once did Ohnaka chime in to say that Chewbacca was taking control of the ship remotely.

Honestly, on that mission I was glad the system took over. While the Falcon does not utilize a video game controller — think giant flashing buttons and levers — it does, at least when it comes to piloting, use standard flight and video game control schemes.

As a longtime video gamer, I believe this is the only possible way for the ride to make sense to its target audience, and therefore I have no issues with the choice Disney made. But I was also on a fly-through with someone who simply couldn’t grasp that pushing forward wasn’t “up,” and that did put a damper on the experience.

The good news is this so-called “hunk of junk” is fast and responsive, which, of course, “Star Wars” fans know because it completed the Kessel Run in less than 12 parsecs. And if you’re able to steer clear of obstacles, it appears the challenges will ramp up. On one relatively smooth flight, we ended up dodging and mostly demolishing a Star Destroyer.

Thus, Smugglers Run is a ride that warrants repeat visits. My guess is that it will take at least two runs to get a firm grasp of the controls, but if you’re playing with a group of five friends, that shouldn’t matter. Pilots will be yelling at engineers to push the buttons to fix the ship and engineers will be yelling at gunners to push the buttons to destroy enemy TIE Fighters.

This is, in all honesty, a blast — an immersive, theme park equivalent of the zaniness that is the brilliantly ridiculous mobile game “Spaceteam.” But expect to be in a group that’s mixed and matched with strangers. When I rode the ride — or controlled the Falcon, rather — with strangers, I found myself too restrained to shout orders and wished there was a way to unhook my seat belt and show the pilot that pushing forward was continually destroying our ship.

That all being said, this ride is detailed. Mess up, and expect to receive a lecture and walk through an exit in which the ship’s hallway is bursting with static and alerts. Succeed, and see a more jokey video with Ohnaka noting we brought back some as-yet-unidentified creatures to the Galaxy’s Edge planet of Batuu.

Both, honestly, were fulfilling. Disney has promised that your success or failure on the ride will follow you throughout the Batuu city of Black Spire Outpost, but even at this press event it’s still unclear how this will happen. A cast member, speaking reluctantly to a member of the media, said this functionality will live at Disneyland on the Play Disney Parks app (the app’s full functionality was not available during the media preview).

The belly of the Falcon will be an Instagrammer’s paradise, where guests will crowd around a holographic chess table. No holograms, but Luke Skywalker’s Jedi training materials can be spotted, as can multiple porg nests. Additionally, there are games to discover while waiting to enter the cockpit. Don’t expect a traditional queue in the moments before boarding, as visitors are allowed to enjoy photo ops or try to trigger some of the unexpected surprises in the ship.

Also impressive is the Ohnaka animatronic — and quite frankly the amount of animatronics present throughout Galaxy’s Edge. The story goes that Chewbacca has lent Ohnaka the Falcon for his questionable smuggling runs in return for some supplies to help the resistance, but it’s clear that was a bad idea as we make our way through the line.

Once inside Ohnaka’s warehouselike shipping center, we’ll walk up what appear to be rusty ramps and see a smattering of rundown equipment, droids and a ship that stutters and stops as it tries to power up. The audio will fill in the backstory of the place, as we’ll listen to Ohnaka’s workers fight with one another, along with alerts that Stormtroopers are coming by for an inspection.

A couple of particularly choice details include a “Star Wars” radio, which looks like a cross between a child’s toy and a ‘70s subwoofer, and a preboarding video with graphics that look to be a nod to the early-’80s “Star Wars” coin-op.

Just make sure you come ready to play.