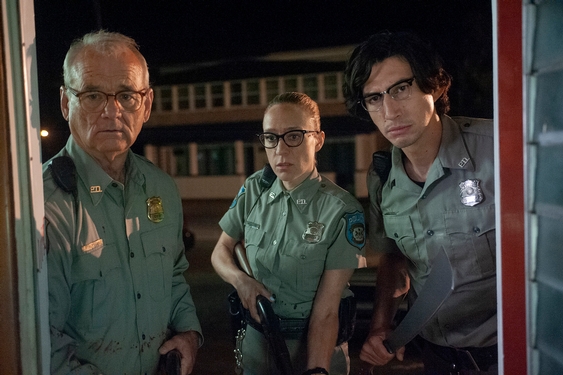 Indie pioneer Jim Jarmusch may be best known for his low-key, chatty black-and-white films like “Stranger Than Paradise,” which won the Camera d’Or at Cannes in 1984, and “Down by Law.” But the auteur has always flirted with genre, from his samurai-inspired crime film “Ghost Dog: The Way of the Samurai” and his recent vampire film, “Only Lovers Left Alive.” Despite his convention-breaking tendencies, it’s obvious Jarmusch loves playing with those conventions too. It’s also obvious he loves horror movies, which is apparent in his meta zombie comedy, “The Dead Don’t Die,” executed with a perfectly Jarmuschian tone.

From the moment a Sturgill Simpson song titled “The Dead Don’t Die” starts playing on the radio in a police car driven by Chief Cliff Robertson (Bill Murray) and Officer Ronnie Peterson (Adam Driver), the audience is tipped off that Jarmusch is going extra self-referential with this love letter to the zombie genre. “It’s the theme song,” says Ronnie, and that’s just the first time he references the filmmaking apparatus. Over the course of the several days in which the undead terrorize the town of Centerville, Ronnie repeatedly deadpans, “this isn’t going to end well,” and eventually reveals he knows that not because zombie movies usually don’t end well but because “Jim” let him read the script.

That outright acknowledgement of the process lets the audience take a bird’s-eye view of Jarmusch’s zombie concept, circling the themes and references on a macro level. On the one hand, it’s a tribute to horror and genre filmmaking, with names like “Samuel Fuller” on the headstones under which decomposing hands burst from the turf. Local horror nerd Bobby Wiggins (Caleb Landry Jones) has a shop full of memorabilia ripe for the referencing, and the character names correspond to classic actors or country stars. Trying to spot all the Easter eggs and digs Jarmusch has planted (Steve Buscemi plays a cranky right-wing farmer named Frank Miller, in a possible nod to the comic writer) is nearly impossible.

The zombie metaphor is eminently malleable, the amorphous horde a putty to be shaped into any sociocultural commentary. In “The Dead Don’t Die,” Jarmusch uses zombies to make an environmental statement. Polar fracking has caused the earth to come off its axis, causing watches to stop, a delayed sunset and corpses to rise from their graves, mindlessly returning to their drugs of choice while feeding on human flesh. “Coffeeeeeee,” gurgles the Iggy Pop zombie; “chardonnnaaaaayyy” growls Carole Kane. Kid zombies maraud the local gas station for candy while adults wander outside the pharmacy listlessly keening for Xanax. Those vices don’t die, that’s for sure. The zombies are the unknowing canary in the coal mine of environmental apocalypse as well as mindless substance abusers. The two can’t be connected, can they?

“The Dead Don’t Die” is a bit too arch and remote to fully enjoy as a transportative or emotional piece of entertainment, but for Jarmusch fans and zombie fans, it’s a fun little exercise in witnessing the auteur graft his unique sensibility onto the beloved genre.

Rated R for zombie violence/gore, and for language.

Movie Reviews
With restraint, ‘The Assistant’ reveals the true terror of a Harvey Weinstein type
698 views

Movie Reviews
‘Star Wars: The Rise of Skywalker’ reviews: The force is not strong with this one
738 views

Movie Reviews
‘Terminator: Dark Fate’: Linda Hamilton saves the world, and a franchise is lifted out of mediocrity
1,203 views
bid=||