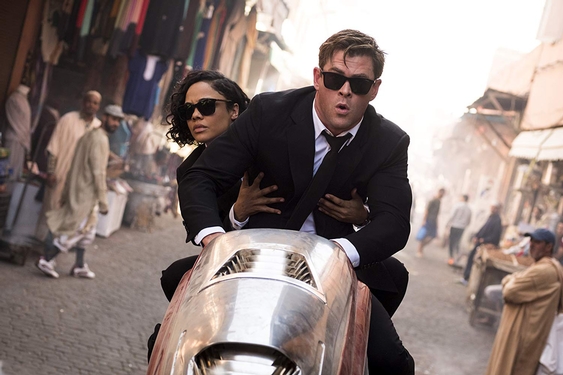 When you’re watching a promotional screening of a big summer picture, and the movie is more or less doing its job without really taking off, it’s instructive to listen to the audience. And then figure out if what works for them works for you.

In the matter of “Men in Black: International,” what works is what’s funny. This is the fourth of the now-and-then MIB franchise. In the supporting ranks, Kumail Nanjiani provides the voice of a tiny alien chess piece, named Pawny, who spends much of the film perched on the shoulder of Agent M, played by Tessa Thompson. He’s there for wisecracks and running commentary, and the occasional foray into battle against the aliens among us.

What happens with Pawny? He opens his tiny digitized mouth and boom: the audience laughs. The theater fills with laughter. The semi-shameless character works because Nanjiani’s line readings are reliable killers. The standup-trained actor, a wizard of timing and inflection, has a way of turning scripted material into spontaneous-sounding material. (Some of it likely was improv-sprung by Nanjiani in the recording booth.)

Nanjiani’s hardly alone, but you surely miss the lil’ piece of tie-in merchandising when he’s not around. “Men in Black: International” isn’t bad; it’s an improvement over “Men in Black II” (2002) and “Men in Black 3” (2012), sequels that even its makers may have forgotten. As a species we appear destined to revisit this basic concept and renew the hunt for fresh variations on the zingy, disarming first picture, which brought the Lowell Cunningham comics to the screen so shrewdly and well in 1997.

Barry Sonnenfeld directed the first three MIB’s; this one’s handled by F. Gary Gray (“The Fate of the Furious,” “Straight Outta Compton”), from a script by “Iron Man” scribes Art Marcum and Matt Holloway. Thompson plays Molly, who encounters a friendly alien as a child. Twenty years later, she lands her dream job when Agent O (Emma Thompson, doing wondrous things with the simplest conversational tactics) takes a chance on the brainy, driven, socially isolated woman before her.

Teamed up with arrogant pretty boy Agent H (Chris Hemsworth), M travels the world in search of a mole within the organization now run by High T (Liam Neeson). The Hive, a shape-shifting alien race, is causing trouble and threatening Earth’s existence. The movie skips from New York to London to Marrakech to Paris to Naples, apparently having borrowed an itinerary from a 1960s spy thriller. Rebecca Ferguson shows up as a three-armed intergalactic arms dealer and former paramour of the Hemsworth character.

Is it fun? Some of it’s fun. But the action is more straight-up violence than comically tinged action violence. Sonnenfeld found a magically right balance of tones and styles in that first MIB outing, and he never quite found it again. Director Gray likewise struggles to locate the right mixture, though you can tell he appreciates what, and who, he has in Tessa Thompson.

She’s one of my favorite movie stars right now, partly because she has such natural authority and ease on screen, and yet refuses to behave like a movie star. She’s simply interesting and funny and real, while also floating slightly above each new outsized absurdity. Thompson does here what Tommy Lee Jones did so well in the first “Men in Black” and never quite managed again. By not overtly giving a rip about the demands or dictates of the franchise machinery clanking all around her, she lightens the load and keeps everything moving efficiently.

The ideal “Men in Black: International” sequel, should one come to pass, would star both Thompsons, and to hell with the men. Does that make me a man-hating feminist? Of course it does. It also marks me as a film lover who doesn’t really need another medium-pretty-decent effort to sort-of-kind-of entertain me and remind me of other, better movies just out for a good time.