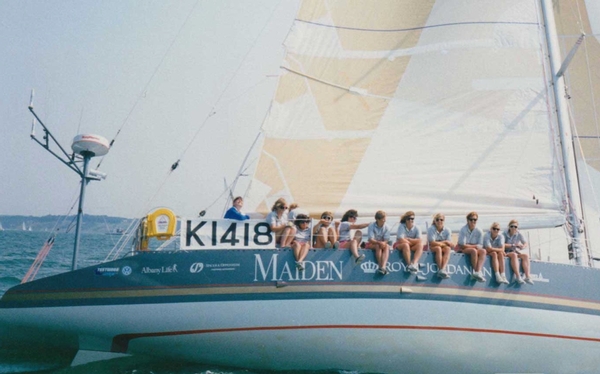 "Maiden" is an remarkable documentary of one woman’s journey of skippering the first ever all-female crew in the Whitbread Round the World Race (now the Volvo Ocean Race) in 1989. This 33,000 mile race is the longest and must challenging race on earth. It also was a male dominated race until Tracey Edwards, a young, optimistic, boat cook came along determined to be a part of it.  What unfolds in this Alex Holmes documentary, is a story of Edwards' perseverance of over coming many odds to succeed in her dream. If you are a fan of ESPN’s "30 for 30" documentary series then you will love "Maiden." If you don’t enjoy sports documentaries but believe in the will of the human spirit, then you will enjoy this film just as much.

"Maiden," which is also the yacht’s name, is seen best on the big screen because the subject matter of boat racing on the open seas of the world is so massive that screening "Maiden" on anything smaller fails in comparison. There are parallels between the Whitbread Round the World Race and Tracey Edwards journey. Edwards' goal is just as big of an endeavor than the race itself.  Her many obstacles include (1) she is a woman in a male dominated sport, (2) has never skippered a ship, (3) has limited experience (4) no yacht (5) no crew (6) little money and (7) everyone seems to be against her including the chauvinistic British press. However, a chance encounter with King Hussein of Jordan gives Edwards that final push to pursue her dream. That initial encounter, would once again prove pivotal to Edwards as her dream becomes a reality.

Alex Holmes (who produces and directs TV documentaries) brilliantly weaves the story of Edwards upbringing by using family home movies along with race footage shot by Edwards' high school friend, who served as the cook on the Maiden. The tragic loss of Edwards' father at an early age, set in motion the uprooting of the Edwards family and alters a somewhat privileged lifestyle Tracey had.  She ends up lost in some ways as she journeys through the trials and tribulations of her life, but ultimately finds a path with the help of some adventurous and tenacious genes passed on from her go-cart racing mother.

When watching "Maiden," you can’t help but to reflect upon yourself. What goals have you accomplished in your life? What obstacles have you overcome to succeed as Edwards does? As a Gen-Xer, who was 22 in 1990, I found the film an eye opener when it comes to equality between men and women, especially in this “Me Too” movement era.  Looking back at that time, I thought women and men were equal and played on a level playing field. While watching "Maiden," you see how false those beliefs were. However, in the last 30 years, we have come so far but still have a long way to go.

In addition to Edwards' story, "Maiden" also puts the spotlight on the Maiden crew. It gives you a peek into their world where men didn't understand (and many still don't) what women were up against. These female crew members were accomplished sailors and absolutely fearless. You get an idea how tough they are, during the leg of the race that goes through the Southern Ocean, which is the most treacherous waters in the world. Waves in this part of the world can top 150 feet and winds can reach 80 miles/hour. The film footage in this portion of the documentary is jaw dropping.  These young women were braver than I ever would have been and the magnitude of the danger they faced is seen when crew members from another boat in the Whitbread Race are swept overboard.

I'm going to take my 11 year old daughter to see "Maiden." I want her to know about Tracey Edwards, the struggles she went through and what she achieved. I want my daughter to understand the importance of women working together, to be empowered, to know that she can accomplish anything in this world if she puts her mind to it and finds a path to succeed.  I want her to know the history of the women who came before her, who "fought the good fight” such as Tracey Edwards. "Maiden" provides one more piece in this puzzle, one more crack in that glass ceiling, proving that men and women are truly equal and given the opportunity, women can win in more ways than one.