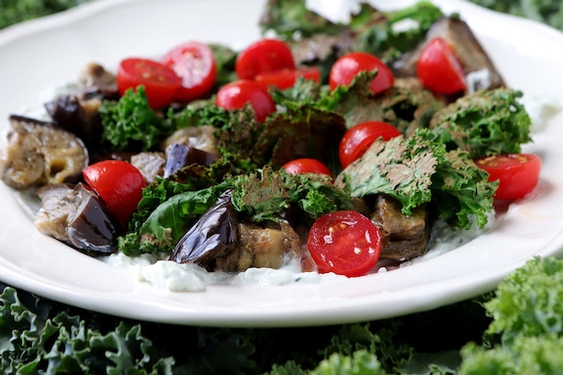 I’m not a fan of kale. When kale is on a menu and something else is offered, I always feel like I have been given a Get Out of Kale Free card.

But kale is in season, and it is positively stuffed full of vitamins and other things that are good for you. Besides, some people — even some people I know, probably — actually like kale.

So I decided to cook up four batches of it to see if there were ways I could come to enjoy it.

And enjoy it I did. If all kale tasted like this, I might even become a fan.

The dish probably had its beginnings in Italy. The ingredients and preparation are traditionally Italian, from olive oil and garlic to white wine, cannellini beans and Parmesan cheese.

Roasted red peppers are also called for, and the recipe from “The Complete Vegetarian Cookbook” suggests that you buy them in a jar. I’d recommend that, too. The red peppers aren’t the star of the show; they are just a supporting player. Roasting them yourself takes time and effort. Save that for a dish that is all about red peppers.

Cannellini Beans With Roasted Red Peppers and Kale has two costars: the beans and the kale. They’re good together any time, and this time they’re great.

The broth in Green Soup is basically a potato soup, rich in onion and garlic, and puréed until it is thickened. The green part comes from kale (or collard greens) that is cut into thin strips and cooked in the broth.

A slice or two or three of chorizo adds a nice spicy bite, and a few drops of the oil the chorizo was cooked in brings it all together into a hearty, memorable meal.

I stayed in the Mediterranean region for Roasted Eggplant and Crispy Kale With Yogurt, which may be the most Mediterranean food ever.

It’s a layered dish, and the bottom layer is essentially tzatziki — a thick yogurt mixed with shredded cucumber, garlic and lemon juice. On top of that goes bite-sized pieces of roasted eggplant. The kale is next, but it has been flash-cooked so it is lightly scorched and lightly crispy. And the top layer is cherry tomatoes that have been halved and tossed with olive oil and salt.

To be perfectly honest, this would be an amazing appetizer or meze even without the kale. But with a hint of bitterness to offset the oil and yogurt, the kale is a definite plus.

The last dish I made was the problem child: Kale With Shallots and Olive Oil. The first strike against it was the name. This dish does not have any shallots in it. It has onions — lots and lots of onions — and shallots are in the onion family. But that does not mean they are in this particular recipe.

The second strike was the oil. It calls for one cup of olive oil. That’s eight ounces of olive oil to feed six to eight people. Sixteen tablespoons. Forty-eight teaspoons. That’s 318 calories apiece for of six servings, 239 for eight.

I decided to compromise and use two pounds — 16 cups — of kale. It worked for me.

That’s probably because the kale is cooked in coriander and cumin, along with a bucket of olive oil. The spices really give the dish a kick, and a hefty dose of lemon juice at the end brings it all home.

Yes, it is a problem child. But as is often the case with problem children, it may be the one I love the most.

2. Toss eggplants with vegetable oil on a rimmed baking sheet; season with salt. Roast, tossing halfway through, until eggplants are charred in spots and tender, 20 to 25 minutes. Remove from oven, sprinkle with cumin and toss to coat.

3. Meanwhile, heat a dry, large skillet over medium-high heat. Add kale, arranging to fit in a single, even layer (work in batches if needed). Cook, turning occasionally, until charred in spots and crisp, about 4 minutes. If using curly kale, weigh it down with another pan while it cooks.

4. Grate cucumber on the medium holes of a box grater; squeeze out excess liquid with your hands and transfer to a medium bowl. Mix in yogurt, lemon juice and garlic; season with salt.

5. Toss tomatoes with a good pinch of salt and a drizzle of olive oil in a medium bowl. Spoon yogurt mixture onto a platter and layer eggplants, kale and tomatoes on top. Drizzle with more olive oil.

KALE WITH ONIONS AND OLIVE OIL

1. Heat 3/4 cup of the oil in a heavy-bottomed pot over medium-high heat until hot. Add the coriander, cumin, black pepper and salt, and sauté until fragrant, about 1 minute. Stir in the onions and sauté until golden, 7 to 8 minutes. Remove 1/4 cup of the mixture and set aside for garnish.

2. Stir in the garlic and cook until fragrant, about 1 minute. Add the jalapeño, if using. Add the kale by handfuls, stirring, and cook until reduced in bulk by half. Reduce the heat, cover and cook, stirring occasionally, until tender, about 15 minutes.

3. Remove from the heat, drizzle the remaining 1/4 cup oil over the kale, cover and let sit until the oil is absorbed, 1 to 2 minutes. Transfer to a serving dish, drizzle with the lemon juice and garnish with the reserved onion mixture. Serve warm.

2. Stir in kale, 1 handful at a time, and cook until wilted, about 3 minutes. Stir in beans, wine and water and bring to a simmer. Reduce heat to medium-low, cover and cook until flavors have melded and kale is tender, 15 to 20 minutes. Season with salt and pepper to taste. Serve with Parmesan, lemon wedges and extra oil.

Recipe from “The Complete Vegetarian Cookbook,” by America’s Test Kitchen

2. Pour in the chicken stock and 3 cups of water, and bring to a boil over high heat. Reduce the heat to medium-low, cover and simmer until the potatoes are falling-apart tender, 20 to 25 minutes.

3. Meanwhile, stack several of the kale leaves and cut into whisker-thin slices. Repeat with the rest of the kale.

4. Purée the soup using a handheld blender, or liquefy in batches in a food processor. Return it to the pot, and bring it back to a boil. Turn the heat to low, stir in the kale and simmer, uncovered, until just tender, 5 to 10 minutes. Swirl in the vinegar, if using. Season well with salt and pepper.

5. Meanwhile, heat the remaining 5 tablespoons of olive oil in a skillet over medium heat until it shimmers. Add the chorizo and cook until crispy, 3 to 5 minutes. Transfer to paper towels. Let the chorizo oil cool a bit.

6. To serve, ladle the soup into warm bowls, crown each with 3 slices of chorizo and drizzle some of the flavored oil from the skillet over the top.

Recipe from “The New Portuguese Table,” by David Leite