‘My Friend Pedro,’ a bizarre ballet of bullets, breaching, and brazen bananas

“My Friend Pedro,” a game all about pistol-whipping enemies, slowing down time, and listening to your psychotic, fruity friend. (DeadToast Entertainment/TNS)

Close your eyes and picture this, if you will. You’ve just woken up in a butcher’s freezer with no recollection of who you are or how you got there. You’re terrified, angry, and alone — except for some banana. But it’s not a regular banana, no, not at all. This banana has a name. It’s Pedro. And he’s your ticket out of this nightmare. The only way out is with guns and a whole lot of crazy. Good thing, because you’ve got it in droves. Welcome to “My Friend Pedro,” a game all about pistol-whipping enemies, slowing down time, and listening to your psychotic, fruity friend. Strap in, because it’s going to be one hell of a ride.

As you work your way out of the butchery, which just happens to be used as something of a waste facility, you’ve got to arm yourself. Pedro wills it to be so, and you’ve got to make sure you’re a force to be reckoned with. You wrestle a pistol away from a guard who has no idea what they’ve just gotten themselves into (and kill him for fun) and it’s off on a mission to fight your way through the area and possibly figure out who you are and why it is you’re letting a floating banana give you orders.

You may be one man that slightly resembles Deadpool by way of your black mask, but you’re mighty. From the very beginning of the game you’ve got your banana buddy and pistol, and two additional skills to help you move things along. You can slow down time to avoid bullets and spin to evade. Both can be used in tandem with each other to make for some extremely fluid gameplay. Suddenly, when you slow down time, shooting some random dude in the face has so much more weight to it.

But there’s more to combat than flipping and rolling and slowing down time. Your unnamed shooter is more than a little acrobatic and can pull off some seriously impressive parkour moves and more. You can aim with the right stick, pull the trigger, and hit your mark with little effort. There’s so much more to the game than that, though. You’ll sprint through each level with the greatest of ease, dodging, rolling, and zipping through enemies who can’t touch you as you twist through the air slipping through a hale of gunfire like some kind of invincible flying dolphin. It’s a beautiful thing, seriously.

When you get your second pistol, though, that’s where things really get crazy. You’ll also get automatic Sequential Manual Gearboxes, a shotgun, sniper rifle, and plenty of other destructive weapons as well throughout the game, in addition to an ability to aim with one weapon and use the other to target one enemy. Basically, you can do a split shot that looks and feels as awesome as it sounds. The more weapons you amass, however, the more difficult the game becomes. Some enemies can be downed with a few well-timed shots as you fly through the air like you’re on a trapeze, and others can one-shot you if you’re not careful. You’ve got to constantly remain on guard, but when you figure out the best way to approach each enemy, you can cut through hordes of them like a hot knife through butter.

Of course, even the most well-timed bullets sent flying through the air are nothing when you’re facing off against one of the game’s five boss fights. Each one is themed differently, whether you’re facing off against a bounty hunter Santa or zipping through the city streets of a neon cyberpunk fantasy land a la Final Fantasy 7. They add a bit more variety into the mix that can be fun to look forward to between lengthy segments where you’re forced to figure out how to approach each unique combat situation, but they can be challenging if you don’t approach them in the right way.

But there’s more to the game than just skipping through battles and decimating everything in your path. Everything you do, you need to do it with style. You’ll earn a ranking at the end of the game’s eight lengthy levels, which will culminate from the style points you earn by killing off enemies in the most creative, cinematic ways you can. The key is to pretend like you’re in an action movie and come up with some seriously insane kills to keep it rolling. It’s easy to do when you can shoot in two different directions, use props in the game world to pull off some seriously decadent kills, and breach areas like you’re in “Call of Duty.” You’ll very quickly become addicted to the thrill of the kill, and the game rewards you for it.

What about Pedro, though? What role does he continue to play in the game beyond being your “best pal” and confidant, telling you to kill everyone? Sometimes you get to hang out with him at his house, which I won’t spoil much about here. You’ll know it when you see it. Unfortunately, these segments are where some of the game’s only real pitfalls occur. Pedro’s home world will put you through some frustrating platforming areas that feel quite cheap, but you’ve got to complete them. The game would have been better served with additional shooter segments since the regular levels are orchestrated so well, but for those looking for a break from the constant action, they do serve their purpose.

“My Friend Pedro” is an amalgam of fantastic bullet play, thumping electronic bass beats throughout each level, and hilariously weird characters. I’m still not sure how the folks at Deadtoast Entertainment came up with this gloriously addictive fever dream, but I’m an absolute fan of whatever creative process that allowed them to craft a dangerously stylish, addictive, and exciting shooter that offers something new and unique for your Switch (or PC) library.

If you’re a fan of the ol’ ultraviolence, sentient pieces of fruit, attitude akin to that of games like “Hotline Miami,” or dizzying gorefests, “My Friend Pedro” is for you. Give it a look, and give the trigger a squeeze. You’ll find it has quite the ap-peel.

This review is based on a Nintendo Switch downlode code provided by the publisher.

Reviews
‘Call of Duty: Modern Warfare’ succeeds by going back to basics
964 views

Reviews
‘Fire Emblem: Three Houses’ is Nintendo at its most flirtatious
2,549 views 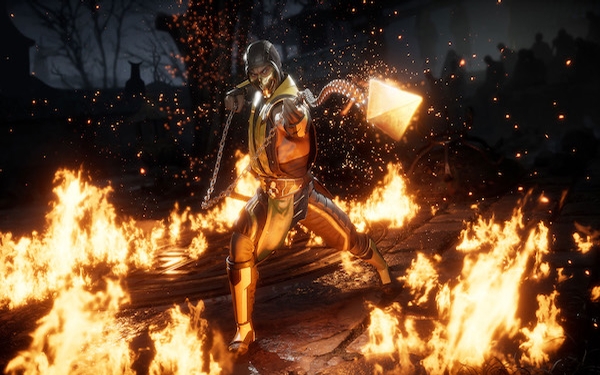