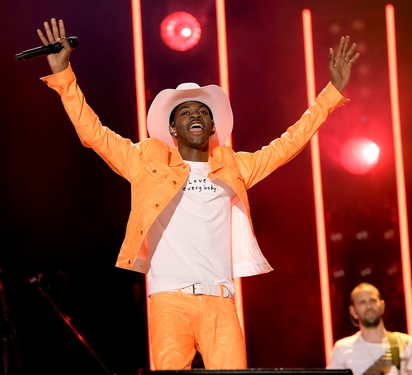 The media obsession with naming one single, world-dominating Song of the Summer is silly, annoying, and pointless.

Music lovers all live in their own playlisted and algorithmed bubbles. My music is probably not your music, and vice versa. And it’s better that way: Who needs a mono-culture when everyone can have his or her own personalized micro-culture?

That said, Lil Nas X’s “Old Town Road” is the song of the summer. How could it not be? The yee-haw agenda hillbilly rap anthem has now been atop the Billboard pop chart for 13 weeks, with old-heads like Taylor Swift and new-schoolers Billie Eilish unable to dethrone it.

So you will find “Old Town” on this songs of summer playlist, which is designed not as a list of contenders for that championship title, but rather as a multi-genre and mood mix of pop hits and indie nuggets that acknowledges summertime is not only for bops, bangers, and songs that slap. Though sometimes it is.

Lizzo, “Truth Hurts.” Just how much 2019 has become the year of Lizzo — the singer, rapper, and flautist born Melissa Jefferson — is demonstrated by this song. “Truth Hurts” was originally released in 2017. But with the success of “Cuz I Love You,” the world needs more Lizzo. “Truth Hurts” took off after being featured in the Netflix rom-com “Someone Great” and went viral thanks to a pithy Lizzo lyric: “I just took a DNA test, turns out I’m 100% that b — .”

Billie Eilish, “Bad Guy.” The 17-year-old goth-pop teen phenomenon is having her biggest hit yet with this slithering, undeniable narrative of rebellion. “I’m that bad type, make your mama sad type / Make your girlfriend mad tight, might seduce your dad type.”

Jonas Brothers, “Sucker.” The all grown-up sibling trio make ear candy suitable for strutting down the boardwalk on a sugar rush on the lead single from their blissed-out comeback album, Happiness Begins. Joe, Kevin, and Nick play the Wells Fargo Center Aug. 18.

Carly Rae Jepsen, “Now That I’ve Found You.” Carly Rae Jepsen will always be the “Call Me Maybe” singer to many, but she’s grown into being a thinking woman’s pop star in the years since that earworm was the undeniable SOS of 2012.

Reyna, “The Way I Loved You.” Milwaukee sisters Victoria and Gabby Banuelos make sleek electro-pop that acknowledges the songs you remember often sound happy but are actually kind of sad.

Taylor Swift, “You Need to Calm Down.” Has Taylor Swift lost her touch? “Me!” the cotton candy overload that was released as the first single from her seventh album, Lover, due in August, suggested as much. This second song out of the box is better, though the singer perhaps tries too hard to position herself as an LGBTQ ally. “Why are you mad? When you could be GLAAD?,” the lyric video tells us the song goes. Is it an earnest Pride month gesture, or does it “hijack queerness,” as some have argued?

Ed Sheeran with Justin Bieber, “I Don’t Care.” This diabolically catchy song from Sheeran’s forthcoming No. 6 Collaboration Project pairs one of Swift’s BFF’s with Bieber, who is Swift’s new arch-nemesis. Why? He’s managed by Scooter Braun, the powerful exec who just purchased Swift’s catalog for $300 million, much to her chagrin. Whose side are you on, Sheeran?

Tyler the Creator, “Earfquake.” The talented Odd Future producer offers a delectable, shimmering love song that he offered first to Justin Bieber and Rihanna, who rejected it. Tracee Ellis Ross stars in the video.

Rosalia, “Con Altura.” This song is so danceable I couldn’t help embarrassing myself listening while walking my dog. The flamenco-schooled Spanish singer teams with Colombian singer J Balvin and producer El Guincho.

Madonna with Maluma, “Medellin.” Going back to “La Isla Bonita,” Madonna has dabbled in Spanish-language pop, and here she enlists Colombian reggaeton singer Malumi to accompany her on a cha-cha-cha excursion from Madame X.

Sleater-Kinney, “The Future Is Here.” From a forthcoming album produced by St. Vincent, “The Future Is Here” moves the rock-and-roll trio into slicker territory distinct from their twin-guitar attack. The new direction apparently didn’t sit well with powerhouse drummer Janet Weiss, who has announced that she’s left the band.

Charly Bliss, “Young Enough.” The title track of this Brooklyn band’s less-frenetic follow-up to 2017’s terrific Guppy confronts the uncertainties of adulthood. “I can’t protect you now, if I couldn’t save you then,” Eva Hendricks sings, sounding triumphant. Charly Bliss are a rare rock standout at Made in America.

Mannequin Pussy, “Fear /+/ Desire.” The album of the summer by a Philadelphia band is unquestionably Patience by Marisa Dabice-fronted Mannequin Pussy, a quartet growing by leaps and bounds that has added unhurried, enveloping grooves to its already furious attack.

Sheer Mag, “Blood From a Stone.” More raging riff rock that evokes the 1970s from the Philly band fronted by Christina Halladay. It’s the lead track from the band’s second album, A Distant Call, due Aug. 23.

Tank and the Bangas, “Smoke.Netflix.Chill.” The playful New Orleans genre-splicing band expand their sonic parameters on the new Green Balloon. Here, Tarriona “Tank” Ball invites you over for activities that promise to be most relaxing, provided the air-conditioning is working.

Megan Thee Stallion, “Money Good.” The Houston rapper who is one of the breakout stars of 2019 on the strength of her unrelenting debut, Fever, lets you know she is in no need of assistance from anyone who “doesn’t bring anything to the table but a plate.” She plays Made in America on Labor Day weekend.

Lil Nas X with Billy Ray Cyrus, “Old Town Road (Remix).” It was released in the winter, then it became the song of the spring, and now the “is it country or is it rap?” phenomenon is in its fourth month at the top spot on the Billboard pop chart. It demonstrates that although pop culture is more fragmented than ever, the internet also unites us and makes cultural ubiquity possible for songs like this that defy categorization but that invite everyone to get on board.

Luke Combs, “Beer Never Broke My Heart.” There’s no shortage of boozing songs on country radio, ranging from Mitchell Tenpenny’s “Alcohol You Later” to “Buy My Own Drinks,” in which the women of Runaway June proudly pony up for their own liquor. Savvy soul Luke Combs joins in with a bruiser that points out a cold one never let him down.

Jade Jackson, “Bottle It Up.” Up-and-coming California alt-country songwriter Jackson shines on this lead track from her sophomore release, Wilderness, which presents itself as a cheerful drinking song but which is really about memory and loss.

Black Midi, “Talking Heads.” Rising British band Black Midi make super-taut, twitchy music that places rhythm at the forefront, recalling punk-era acts like the Minutemen, Wire, and, yes, the Talking Heads, whom this song is not about.

Brittany Howard, “History Repeats.” Alabama Shakes singer Brittany Howard has a solo album called Jaime, named after her late sister, due in August. This personal protest voices its desire for the dark days of history not to repeat themselves, and intrigues with Howard drawing from Curtis Mayfield and Marvin Gaye.

Nick Lowe, “Love Starvation.” The title track on the new EP from the former New Wave hitmaker, who sounds unbothered by being locked up in a prison of disappointment and desperation. Maybe because he has terrific surf-guitar band Los Straitjackets backing him up.

Bruce Springsteen, “Moonlight Motel.” The closing track from Western Stars, Springsteen’s best album in more than a decade, delicately revisits a place of previous happiness, only now the swimming pool is drained and the season of contentment is in the distant past.

Lana del Rey, “Doin’ Time.” The queen of summertime sadness delivers a blissfully bummed-out cover of a 1996 song by ska-punk band Sublime about those days when summertime ought to mean living is easy but you’re too lazy and hazy to get out of a beach chair.