Horror film ‘Midsommar’ is so scary, it may drive you out of the theater 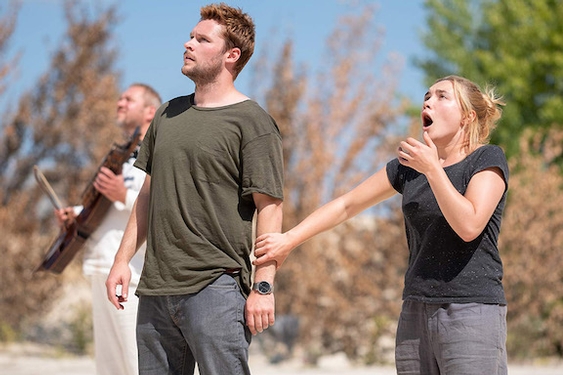 “Midsommar” is an upsetting movie, and I mean that word in pretty much every way you can think of.

Writer/director Ari Aster’s second horror feature, after “Hereditary,” upsets because of the activities it depicts. (At one point, I calmed myself by thinking, “Well, at least these people aren’t eating each other,” but, honestly, I’m not so sure.) More crucially, it wants to upset the way you feel, maybe even the way you watch movies.

It puts genuine grief and scary-movie ridiculousness right next to each other. It seems like it’s forcing you to breathe a little differently. It puts you on edge, and, if you are into the idea of a divisive movie that messes with your head, you may like it. But I suspect many people will walk out in the middle.

Fans of “Hereditary” will recognize the territory, but although “Midsommar” shares with the earlier movie a finale marred by predictability, it is much harsher. Florence Pugh’s Dani is, like Toni Collette’s character in “Hereditary,” someone whose life is turned upside-down by a violent family tragedy right after the movie begins — a tragedy Aster insists we need to see every bit of in order to understand just how life-changingly awful it is.

To recover, Dani goes on a group trip to Sweden in summer, accompanied by her distant boyfriend, Christian (Jack Reynor). Unbeknown to her, Christian wants to break up with her. Unbeknown to everyone in the movie, Christian’s name seems like a signpost that he’s in for trouble when the group plops down among a bizarre pagan cult whose blank, blond members behave very strangely.

Meanwhile, the friends are high on mushrooms, people begin to disappear and everyone eats meat pies that may or may not have people in them. (That the movie never tells us is part of its atmosphere of unease.)

Aster quickly has established himself as a master of creating discomfort. He has a sure command of cinematic techniques that stir up bad feelings: sending us off-kilter by violating the “180-degree rule,” which holds that a movie should not cut from one shot of people to another shot of those same people from the opposite vantage point. Doing the same with jarring edits between images. Crafting a perfect final shot that you’ll miss if you blink. Getting in our head with atonal music, then making fun of us for falling for it — in one scene, the soundtrack’s unnerving drone is suddenly revealed to be a horrid tune being played by a trio of Swedish cultists.

I won’t say much about the plot for a couple of reasons. First, if you’re the sort of person who likes being taken on a ride by a movie, I wouldn’t wreck that. And, second, because after two hours of masterfully creeping us out, “Midsommar” reveals itself to be a disappointing mashup of two horror classics, one from just a couple of years ago and one from the 1970s.

Anyone who spends much time reading or going to the movies or theater knows it’s really hard to begin a compelling story but that it’s even harder to end it well. My theory is that Aster is a fantastic director who might profit from working with a writer who is not himself. But the truth is that he’s just two movies into his career, and it’s probably only a matter of time before he figures out how to stick the landing.