Quentin Tarantino’s ‘Once Upon a Time … in Hollywood’ is Sony’s big summer gamble. Will it pay off? 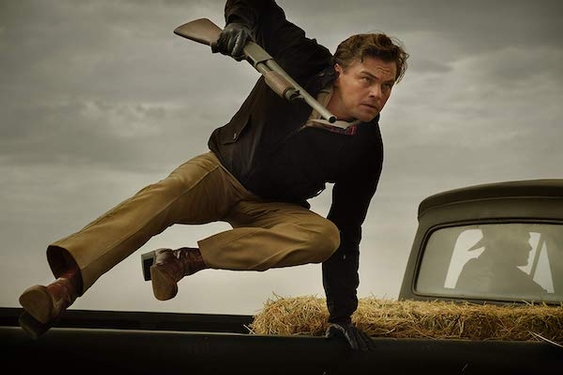 Sony Pictures’ film chairman, Tom Rothman, has no illusions about the risks of releasing Quentin Tarantino’s “Once Upon a Time … in Hollywood.”

The acclaimed and controversial auteur’s upcoming odyssey through 1969 Los Angeles is a show business rarity: a pricey studio release in the middle of summer that’s not a sequel, remake or superhero film. The box office has been dominated by franchise movies including Walt Disney Co.’s “Toy Story 4,” “Aladdin” and “The Lion King,” which opened with a stellar $191.8 million at the domestic box office last weekend.

What’s more, the 2 hour, 41 minute , R-rated film grapples with highly sensitive subject matter: the murder of actress Sharon Tate and others at the hands of Charles Manson “family” members. A young Roman Polanski, Tate’s husband, even shows up in the film.

The Thursday night opening of “Once Upon a Time … in Hollywood” comes at a time when the Culver City-based Sony is riding high on some box-office success after years of difficulties.

Sony and Rothman have basked in the prestige of releasing the newest movie from the “Pulp Fiction” and “Reservoir Dogs” director. The studio, owned by Tokyo-based electronics giant Sony Corp., has been tight-lipped about the plot, imploring journalists at screenings to not spoil the movie.

But while Tarantino, 56, is known for his edgy, often popular films, “Once Upon a Time” is far from a surefire win. The movie, which features highly paid actors Leonardo DiCaprio and Brad Pitt, cost $90 million to make after qualifying for a roughly $18-million California tax credit. Set against Hollywood institutions including the Cinerama Dome and Musso & Frank Grill, the movie stars DiCaprio as an aging TV actor, while Pitt plays his longtime stunt double.

“Once Upon a Time … in Hollywood” also comes with some baggage. It represents the first Tarantino movie not released by Harvey Weinstein, the disgraced indie mogul whose studio declared Chapter 11 bankruptcy last year after Weinstein was accused of sexual assault by multiple women. (Weinstein has denied all allegations of non-consensual sex.)

The film’s rollout has sparked awkward moments. At the Cannes Film Festival in May, a female journalist during a panel asked Tarantino about the lack of lines for Margot Robbie, who plays Tate. “I reject your hypothesis,” Tarantino responded, curtly.

For Rothman, the decision to pursue the Tarantino project was an easy one. In 2017, as Weinstein Co. was in freefall, Sony was trying to wage a turnaround and fill out a thin film slate. Rothman, the former Fox film chief who replaced Amy Pascal as head of Sony’s movies unit in 2015, had been dogged by rumors that his job was in danger amid the studio’s slow recovery.

Rothman had been wooing Tarantino’s agent, William Morris Endeavor’s Mike Simpson, for months after he learned that the writer-director was working on a project with an L.A.-based story. Sony had previously benefited from handling the international release of his 2012 hit “Django Unchained” and was eager to get back in business with him.

“I basically did the same thing I did with my wife, who I had to ask to marry me four times,” Rothman said.

Simpson invited multiple studios and financiers to read Tarantino’s script at WME’s Beverly Hills offices in late 2017. Rothman, who read the material in a conference room next to Simpson’s office, was enamored with its singular style and idea, and thought the story held commercial appeal for adults who often lack options at the cinema.

“I just don’t think we can give up on this audience,” Rothman said. “We could write ourselves out of a big portion of the business if we don’t keep fighting for this.”

Some companies balked at the aggressive terms Tarantino sought, including the hefty production budget, according to people close to the talks who were not authorized to comment. In the end, Sony beat out rivals including Warner Bros., Paramount Pictures and Netflix for the movie.

Tarantino’s deal with Sony granted him final creative say over the project and a significant share of receipts after the studio breaks even, the people said. Full ownership of the underlying copyright to the film is set to transfer to him after 30 years, with potential extensions.

Financial concessions weren’t the only factor. Tarantino was won over, in part, by Rothman’s enthusiasm for the film, according to Shannon McIntosh, producer of “Once Upon a Time” and other Tarantino efforts. Sony also promised a major promotional campaign, including a takeover of Sunset Boulevard advertising, she said.

“It wasn’t just lip service,” McIntosh said. “You felt that [everyone in the] room collectively understood the movie Quentin wanted to make and how to support it.”

Setting a release date was a critical decision. Many studios save sophisticated R-rated movies for fall, when they can take advantage of awards season and avoid competition from blockbusters. In a bold move, “Once Upon a Time” hits theaters the week after “The Lion King” and the week before Universal Pictures’ “Fast & Furious Presents: Hobbs & Shaw.”

Still, Rothman argued that adults will continue to seek out the movie in the weeks after its opening, thanks to word-of-mouth.

“There was lots of back and forth about the date and the question of going out in the summer or not,” Rothman said. “Newness is a challenge in our world today … but I think it’s a big virtue coming out [in the summer], and that is really our gamble.”

“Tarantino is one of those directors that pull you in on name recognition alone,” Bock said.

Tarantino’s “Inglourious Basterds” opened to $38 million in August 2009 and remains his biggest box-office debut. It eventually grossed $321.5 million worldwide. “Django Unchained” opened with $30 million on its way to $425 million. Tarantino’s most recent movie, the 2015 Western “The Hateful Eight,” took in a relatively modest $155.8 million worldwide, including $54 million in North America.

His latest film could do well internationally. It earned raves at Cannes and holds a 93% “fresh” rating on Rotten Tomatoes. One wild card is China, where the movie does not yet have a release date. Beijing-based Bona Film Group has a 25% stake in the film.

Rothman said the movie fits with the studio’s two-pronged strategy of betting on filmmakers, while separately trying to revive its franchises. The studio’s upcoming movies include a “Charlie’s Angels” sequel, Greta Gerwig’s “Little Women” and “Jumanji: The Next Level.” The studio last week set a deal with Fox 2000 head Elizabeth Gabler and publishing house HarperCollins to adapt books.

Sony remains somewhat of an underdog, with 10% of domestic ticket sales this year, according to Box Office Mojo, ranking fourth in market share behind Disney, Warner Bros. and Universal Pictures. Rothman said the studio is well positioned and has high hopes for “Once Upon a Time”’s prospects.

“I’d be very surprised if this isn’t Quentin’s biggest movie internationally,” he said.

Special Features
Digital theater is all the rage, but could it destroy the live stage?
690 views

Special Features
Intimate portraits piece together the puzzle of Natalie Wood, the person and mother
473 views

Special Features
Now’s the perfect time to dive into musicals. Here are our critic’s top 7 to watch
400 views

Special Features
Oscars 2020: Who will win and who should win
977 views

Special Features
Secret screenings. Redacted scripts. How they make the twists in ‘This Is Us’
418 views
bid=||