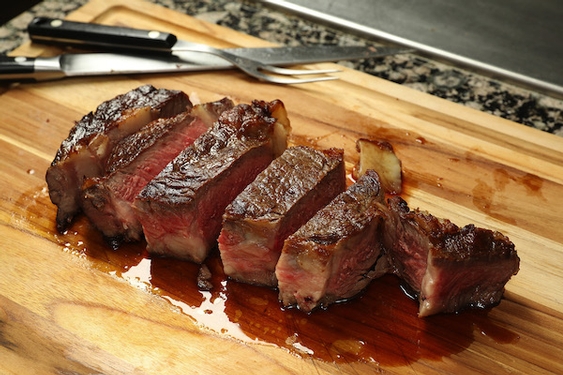 Cooking steak outside? That’s easy. Get the grill as hot as possible, toss the meat on and cook until done. But attempt that same stunt indoors, and you’ll smoke out your family and any immediate neighbors. Sure, you could turn the heat down, though then you risk either ending up with a sad, gray piece of meat devoid of an evenly browned crust or a steak that is horribly overdone.

As a condo dweller without easy access to an outdoor grill, I’ve tried a number of different methods, from using electric grills and grill pans to placing multiple fans around my kitchen to help direct the smoke out the window. Usually, my family just sits down to dinner in a haze of vaporized beef fat so thick we can hardly see one another.

Turns out I was thinking about it all wrong. Instead of worrying about what to do with an excess of smoke, what if I used a method that keeps the high-heat cooking to the shortest amount of time possible?

That’s the deal with the reverse sear, a method of cooking thick steaks that is contrary to two long-held, though entirely false, pieces of steak-cooking lore. No doubt, you’re heard that searing “seals in the juices,” even though that’s been disproved by just about every food authority over the past 30 years, including by renowned food scientist Harold McGee. And I’m guessing some questionable uncle instructed you to only flip a steak once.

We’re going to do the opposite. Instead, gently cook the steak until nearly done in a very low oven, and then sear it quickly at the end, flipping every 30 seconds. This method is called the reverse sear, and it’s been popularized by J. Kenji Lopez-Alt, the chief culinary consultant at Serious Eats, and Chicago’s Meathead Goldwyn, whose cookbook, “Meathead: The Science of Great Barbecue and Grilling,” I consulted for this recipe.

Here’s how it works. Heat the oven to 225 degrees. Place a large steak on a wire rack set over a rimmed baking sheet, and then set it in the oven. Cook until the steak is 115 degrees in the middle, or about 20 degrees shy of medium-rare. How long this takes depends on the size of your steak, but it usually takes me at least 50 minutes. This is a slight pain, but nothing compared with too much smoke.

Fresh out of the oven, the steak looks miserable and gray. But you’re not done. Heat a cast-iron skillet over high heat. Add a tablespoon of oil, and as soon as it starts to smoke, add the beef. Instead of leaving it be, flip it every 30 seconds, or until the interior registers around 130 degrees for medium rare, about two minutes total. To help improve the browning even more, toss in some butter, and baste the steak lovingly with a spoon. There will be some smoke, but it’ll all be over quickly.

The advantages of the reverse sear are easy to see. The steak will develop a stunningly browned exterior, without a spot of gray. Cut in, and instead of a thick band of gray meat around the exterior, the steak is mostly rosy pink from top to bottom.

Two words of warning. This recipe only works with big steaks, the kind that are at least 1 1/2 inches and up to 2 inches thick, and which weigh about 2 pounds. I went with a bone-in rib-eye, which was more than enough to split with my wife and have some left over for a light lunch the next day. And you won’t be able to measure the steak’s internal temperature without a good meat thermometer, preferably an instant-read digital thermometer. It’s the only way to ensure you never overcook a steak again.

Recipe adapted from Meathead Goldwyn’s method for the grill in his book, “Meathead: The Science of Great Barbecue and Grilling” (Rux Martin, $35).

2. Heat oven to 225 degrees. Place the baking sheet in the oven. Cook until the middle registers 115 degrees. Using a digital meat thermometer, check the meat every 10 to 15 minutes. The total time depends on the thickness of the steak, but plan for 45 to 55 minutes. Once the temperature reaches 100 degrees, plan to check the temperature every 5 minutes, so you don’t overcook the steak. When it has reached 115 degrees, remove steak from oven.

3. Heat oil in a large cast-iron skillet over high heat until just starting to smoke. Add the steak and butter. Carefully spoon the melted butter over the steak. Flip the steak after 30 seconds. Continue spooning the butter and flipping the steak every 30 seconds, until the steak has been in the pan for 2 minutes. Remove the steak and check the temperature. If it’s 125 to 130 degrees, set it aside on a clean plate to rest. If not, return it to the pan for an additional minute of basting, flipping halfway through.

4. Let the steak rest, 10 minutes. Cut the steak into thick slices, season with black pepper and an additional pinch of salt. Divide between two plates and serve.