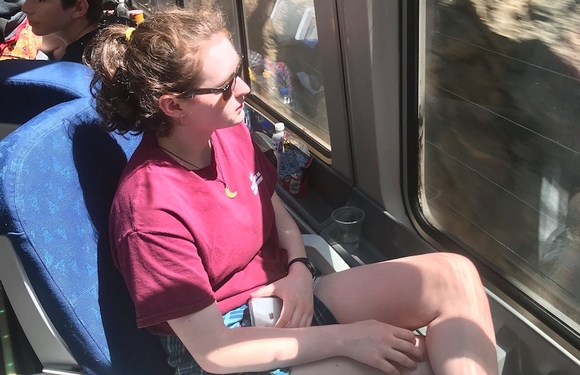 The writer's daughter, Sally Carpenter, soaks up the scenery as Amtrak's California Zephyr climbs into the Rocky Mountains in Colorado. (John Carpenter/Chicago Tribune/TNS)

When my daughter put two California colleges on her list, I casually wondered whether it would be cool to take the train there from Chicago and maybe drive down the Pacific Coast Highway from Berkeley to Pomona. Her eyes lit up, and the decision was made.

Parenting tip: When your 17-year-old agrees to spend 57 hours on a train with you, followed by three days in a car, you say yes and book the tickets as fast as you can.

This tendency of mine to turn school visits into diversionary adventures might seem like parental avoidance. I look at it as an aging dad shaking his fist at the modern college-search stress machine.

The plan was this: Sally and I would ride Amtrak’s venerable California Zephyr to the Bay Area, where my wife, Mary — whose love for me does not extend to my fondness for rail journeys — would arrive by air and join us. After a tour of Berkeley and a few days in San Francisco, we’d rent a car and drive south at a leisurely pace, with a short hike in Big Sur and stops in Monterey and Santa Barbara. After a night in the Los Angeles suburbs, er, the bucolic foothills of the San Gabriel Mountains, we’d hightail it home in the traditional manner, uncomfortably folding ourselves into an airborne metal tube.

The first thing you need to know about taking a 2,438-mile train ride is that patience is both required and rewarded. Also, reserving a sleeper car is highly recommended. It’s not cheap, but all meals — in our case, seven of them, times two — were included for a grand total of $1,119.

Our Superliner Roomette was tight but efficient: two comfortable seats facing each other, with a pop-up table between. At night, those seats slide down to make one bed, while an upper bunk drops from above. Both beds are made up with mattresses, sheets, blankets and pillows — hardly a four-star hotel, but comfortable enough.

And there is something lovely about sleeping on a train. The gentle rocking of 2 million pounds of steel surging across the Midwestern prairie at 70-plus miles an hour is oddly soothing. And when you feel a stop, you can pop up on an elbow and groggily look out at, say, Holdrege, Neb., at 2:30 a.m.

I’ll be the first to admit that I pull out my phone in idle situations that might otherwise involve conversing with strangers. But I found the polite conversation that the dining car requires refreshing. Sally and I were seated with two strangers for each of the seven meals we had on the train, and all were pleasant, interesting companions. Even better was watching my daughter smoothly rise to the challenge of seven consecutive “So what do you want to study in college?” questions. (She isn’t sure yet.)

Especially memorable was meeting the grandson of a recently deceased literary legend, who was returning from the funeral. Our conversation continued in the cafe car, where he offered my daughter kind and helpful observations on his own college experience.

A big allure of the Zephyr is the scenery, specifically the two giant mountain ranges it crosses. After a morning stop in Denver, the train begins its long, wandering path through the Rockies, with breathtaking views around every turn. Later come the Sierra Nevada mountains of eastern California, where we ooohed and aaahed at the sweeping vistas through Donner Pass.

In Berkeley, I booked the Graduate hotel thinking it was a playful take on the college town’s role in the famous 1967 movie. Spoiler alert: It isn’t. But it is part of a Chicago-based chain of boutique, college-adjacent hotels. We were able to enjoy a quirky, comfortable home base and get a good sense, beyond the traditional tour, of both the town and the University of California, Berkeley, which was across the street.

Few things make one look more like a dorky tourist than participating in a Segway tour. But a sketchy outfit in San Diego once let my daughter ride one when she was 7, so we honored the memory by joining a tour in San Francisco. Highly recommended, optics be damned.

And shame on you if you visit San Francisco and don’t venture north to Muir Woods. Our hike among the mighty coastal redwoods was sublime.

Our first leg of the drive south was a challenge, as it was a spectacularly good beach day, with all the traffic that brings. We were rewarded in Monterey with a balcony room at the Monterey Plaza Hotel, and my daughter and I soon found ourselves standing over the ocean, mesmerized by the seals and otters playing below.

I was skeptical of the hotel restaurant, as I live by the rule that eateries with spectacular views are often good but rarely great. But Schooners Coastal Kitchen was the latter, especially the cioppino, which exploded with flavor.

Day two of our 500-mile drive was everything you’d expect from one of the world’s great motorways. With mountains on our left and the broad, majestic Pacific on our right, it was all we could do to not stop at every scenic turnout.

When researching hiking options along the Big Sur coast, we found the Jade Cove Trail online. But we had to ask some locals for help finding it in real life. A short walk through some thick vegetation later, and there we were atop a sheer cliff, peering over a breathtaking green, rocky inlet. We searched in vain for a path down, finally spotting a knotted rope disappearing over the edge. No thanks. Later, we found a more accessible inlet and dipped our toes in.

A sign at our Big Sur lunch spot, Whale Watcher Cafe, declared “No WIFI!” in a polite but scoldy, handwritten scrawl near the cash register. Good for them. We watched for whales instead. (No luck.)

We got our taste of Southern California beach culture in Santa Barbara. Mary used her frequent flyer miles to book the Californian, an upscale, elegantly casual spot across the street from Stearns Wharf. It was worth the splurge, but there were any number of worthy options along Cabrillo Boulevard, the beach strip.

Claremont, home to Pomona College, was our final stop. We had to put up with nearly three hours of L.A. traffic to reach it, but that memory took a backseat as we cruised the streets lined with dreamy purple jacaranda trees. Our hotel, Hotel Casa 425, was another excellent walk-to-campus find.

You might have noticed that in this story about college visits, I haven’t said much about the colleges. They were great. And lovely. Far better, though, was the unhurried time for conversation … and silence. And I’ll always remember the smile I had trundling down an old wooden staircase behind my wife and daughter, the kind of women who’d rather stop and put their feet in the Pacific than push through to the next hotel.

(John Carpenter is a freelance writer.)