World Cup: Here's why the World Cup kicks the Olympics 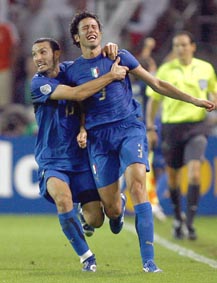 It took me several World Cups and several weeks of this particular World Cup to figure out why I respect the event and the sport of soccer so much even though I really don't understand either.

Yes, I like and defend the World Cup _ even the 2-0 semifinal lockdowns _ because the World Cup is so much better, purer and more thoroughly enjoyable than that other raucous international sports festival.

Oh, I understand that the World Cup, like the Olympics, has imperfections, quirks, frauds and disappointments.

Both have officiating and judging that seems to roam from bad to flat out corrupt. Both have weird personalities _ Wayne Rooney and Tonya Harding, for example.

But, with the final coming up Sunday, I am at peace with the certainty that the World Cup is superior to the Olympics in every aspect I can name, and here's why . . .

The World Cup: Blessedly free of pixies, unless you count Landon Donovan. The Olympics: Blighted by tumbling and tassled sprites, though I discount Bob Costas.

The World Cup: No torch relay, no prolonged opening or closing ceremonies (that I know of).

The Olympics: Nothing screams turn-off-the-TV louder than this thought: "It's midnight, this is tape-delayed, and they're only halfway through the parade of nations?"

The World Cup is a wonderful clash, mingling and spotlighting of cultures. You have Brazil's samba playing style, England's angst, France's schizophrenic ups and downs, and the United States' superpower frustrations in the ultimate competition.

The World Cup: "The Hand of God." The Olympics: "The Hand-Outs of the Salt Lake City bid."

The World Cup is run by FIFA officials, who are arrogant but don't prance around like world statesmen.

IOC officials are sure they're producers of World Peace (witness: Beijing 2008), just like they produced peace for Berlin after 1936, Sarajevo after 1984 and Atlanta during 1996.

World Cup games can be maddeningly boring for 88 minutes and still produce a single serene moment that means everything. The Olympics can produce fascinating moments that get obliterated by the immensity of everything else.

It's good that the World Cup isn't owned and operated (or even followed) by Americans, which makes the event exotic and gives local soccer-istas the chance to look down at the rest of us. I don't mind, because it gives me the chance to discover soccer or ignore it at my discretion.

It's impossible to ignore the fact that the United States _ or NBC, whichever you consider more powerful _ owns the Olympics and shoves it down our throats whether we like it or not.

Brazil in the World Cup.

Brazilian fans at the World Cup.

Mexico in the World Cup.

Hundreds of millions of people play soccer every day, just not in America. Nobody luges (plays luge? performs luge?) every day, not even Minnesotans.

The World Cup: Can be enjoyed watching foreign-language broadcasts.

The Olympics: NBC broadcasters often sound like they're speaking a foreign language, or, in the case of Scott Hamilton, in shrieking tones only dogs can hear.

There's sense of honor at the World Cup _ for example, David Beckham resigned his English captaincy after a quarterfinal loss to Portugal. There's not much honor at the Olympics _ for example, Bode Miller re-signed several bar tabs to celebrate his Torino flops.

The World Cup could never be broadcast on tape delay; it's an event, not a TV show.

The Olympics are the ultimate non-sports fans' sporting event: Gushy, over-baked emotions, Johnny Weir, no strategies, just schmaltz, and if one favorite loses, there are always 10 other events coming.

The World Cup is the ultimate sports fans' event (except in the United States): All build up, second-guessing, passion, agony and sudden history.

This column, of course, will disqualify me from my dream of running with that deifying torch some day, but I'd only use it to burn down the closest IOC trinket booth.

Visit MercuryNews.com, the World Wide Web site of the Mercury News, at http://www.mercurynews.com.