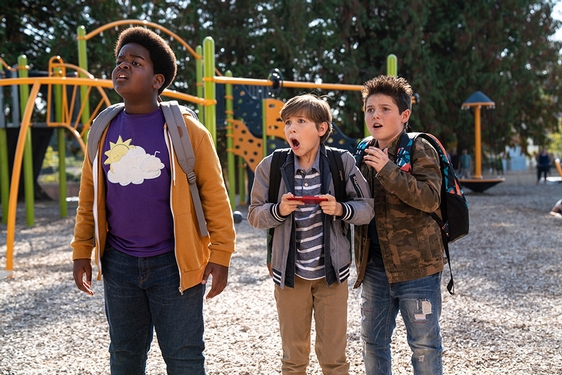 Gene Stupnitsky and Lee Eisenberg’s raucous tweenage comedy “Good Boys” dives into the sordid, silly world of sex, drugs and middle school. It’s a film about a specific time, that oh-so-short moment when the world of adults permeates a kid’s consciousness, ill-equipped to process or understand any of it, try as they might. Stupnitsky and Eisenberg have deftly mined this space for laughs, and the seasoned comedy vets (“The Office,” “Year One,” “Bad Teacher”) deliver a joke-dense and highly original coming-of-age tale that’s sweet and sour in all the best ways.

Bean Bag Boys Max (Jacob Tremblay), Thor (Brady Noon) and Lucas (Keith L. Williams) are at the age where their vocabulary has far outpaced their growth spurts. The trio of longtime best friends swears up a blue streak while wildly misinterpreting the sex terminology they use, and they’re still deeply programmed by D.A.R.E. and other kid-friendly anti-drug campaigns. “Drugs ruin lives and communities,” Max parrots in a panic when they discover the purse they’ve snatched from his teenage neighbor Hannah (Molly Gordon) contains party drugs. Yet Max is determined to go to his first “kissing party,” where he hopes to smooch his crush, Brixlee (Millie Davis).

Welcome to the awkward phase, where growing up is a temporal minefield navigating friendships, relationships, parents and bullies, all while enduring an onslaught of new and confounding information, social pressures and hormones. Will the Bean Bag Boys make it out alive?

That becomes increasingly questionable over the course of a single day, wherein the boys have to trade Hannah her drugs for Max’s dad’s drone, which they crashed in her yard while trying to learn about kissing (naturally). Hand off the drugs, get the drone, avoid getting grounded, go to the kissing party, achieve popularity, marry your sixth-grade crush. That’s how it works, right? This odyssey through mean girls, frat houses, sex toys, tired cops and six-lane freeways proves to be the boys’ first lesson in the epic complications and moments of serendipity life always throws your way.

Eisenberg and Stupnitsky co-wrote the film, while Stupnitsky makes his feature directorial debut, and the two have crafted three incredibly well-drawn and detailed characters in the titular boys, brought to life by a trio of charming performers. It’s fun to watch Tremblay stretch his wings into a role that has a bit more bite. But his costars are the breakouts, particularly Williams as the honest-to-a-fault, nervous nelly Lucas, the most childlike of the pals (though he looks the oldest). Lucas loves rules and telling the truth and often emits high-pitched screams. Thor, with his gelled hair and earring, is desperate to be cool. His desire for popularity, and to escape middle school without an embarrassing nickname, eclipses his own identity.

This is a film about how friendships function within shifting identities and changing times. But above all else, “Good Boys” is just an incredibly funny, laugh-a-minute movie. Eisenberg and Stupnitsky have elevated lowest common denominator humor into potentially its highest form, deriving laughs and insight from the adorably immature misunderstandings about the world of boys of this age. “Good Boys” is a moment to reminisce and embrace your inner tween self, and give thanks for those awkward days gone by.