A $100,000 bribe got teen a UCLA soccer scholarship without even playing 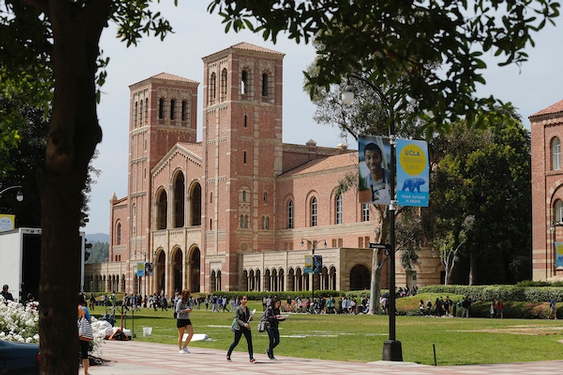 On paper, the high school senior from British Columbia was a promising soccer player. So much so that UCLA admitted the teen last fall as an athletic recruit and even awarded him a scholarship.

The teen, however, didn’t play soccer — and his admission to UCLA was bought with a $100,000 bribe William “Rick” Singer paid to Jorge Salcedo, then the head coach of the UCLA men’s soccer program, according to court documents and sources with knowledge of the case.

The transaction is outlined in an indictment charging Salcedo with racketeering conspiracy. The indictment doesn’t name the applicant or his family, but people familiar with the case identified the mother as Xiaoning Sui, who lives in the Vancouver area. The Los Angeles Times is not naming her son because he may be a juvenile.

Sui has not been charged with a crime. She didn’t respond to requests for comment. Salcedo has pleaded not guilty, and his attorney declined to comment.

Singer cooperated with prosecutors after he was caught last September and pleaded guilty this year to four felonies, admitting he’d rigged college entrance exams for the children of his wealthy clients and misrepresented them as top-notch athletes in sports they didn’t play competitively, or at all. His attorney declined to comment.

Sui agreed to pay Singer $400,000 for help getting her son into UCLA, and she paid a deposit toward the agreed-upon sum in October 2018, a person familiar with the case said. The amount of the deposit, and whether Sui eventually paid the balance, isn’t known.

It’s unclear whether Sui was aware Singer intended to bribe Salcedo when she agreed to the $400,000 fee. Two of Singer’s clients, who paid millions to get their daughters into Yale and Stanford, haven’t been charged and have maintained they knew nothing of the bribes Singer paid to ensure their daughters were admitted to the elite schools.

Given the number of parents allegedly involved in Singer’s conspiracy, experts said, jurisdiction issues may have led prosecutors to prioritize his clients who live in the United States and defer pursuing those overseas.

A spokeswoman for the U.S. attorney’s office in Massachusetts, which is prosecuting the college admissions cases, declined to comment.

Singer mailed Salcedo a $100,000 check in October 2018, the indictment says, and in exchange, Salcedo designated the son of one of his clients as a soccer recruit, “despite the fact that the student did not play competitive soccer.” A recruiting profile for Sui’s son was embellished with bogus accolades that depicted him as a club soccer standout, a person familiar with the case said.

Sui’s son was approved for admission in November 2018 as a recruited soccer player and given an athletic scholarship that would have covered a quarter of his tuition at UCLA, the person familiar with the case said.

UCLA draws top athletes to its men’s soccer program, and last year the school boasted it had landed the top-ranked recruiting class in the country. Five of UCLA’s seven signings that year had trained with various U.S. national teams; four were ranked among the top 20 recruits in the country.

Tod Tamberg, a spokesman for UCLA, said he was prevented by law and school policy from discussing the situations of individual applicants. But if a student misrepresents information on an application, UCLA can take action “up to and including the revocation of their admission and dismissal from the university,” he said in a statement.

UCLA’s practice of admitting athletes with questionable athletic credentials — or none at all — has come under scrutiny in recent months, with a San Francisco Bay Area couple admitting they paid Singer $250,000 to get their daughter into the school as a purported soccer player. Their daughter didn’t play soccer, but she was listed on the roster for a team that finished the 2017 season runner-up to national champion Stanford.

Four years earlier, an applicant was admitted after her parents pledged to donate $100,000 to the school’s athletic program — an arrangement probed in a confidential report written by the head of UCLA’s compliance office, which the Los Angeles Times reviewed.

The indictment that outlines Singer’s alleged deal in 2018 with Salcedo says Ali Khosroshahin, a former University of Southern California soccer coach, was paid $25,000 for arranging the bribe. Singer had been apprehended and was cooperating with authorities when he gave the alleged payments to Salcedo and Khosroshahin.

Salcedo resigned in March from the head coaching post he had held for 15 seasons at UCLA, his alma mater. Khosroshahin has pleaded guilty to racketeering conspiracy and is cooperating with the federal prosecutors in Massachusetts, who exposed Singer’s scam.

Of the 34 parents charged by the U.S. attorney in Massachusetts with fraud and money laundering, 15 have pleaded guilty. The rest are contesting the government’s allegations.

Singer’s alleged deal with Sui underscores how his scheme extended beyond the 34 parents facing charges. Some of Singer’s most lucrative clients, including two families who collectively netted Singer $7.7 million, haven’t been charged.

Former prosecutors said a range of factors — jurisdiction issues, manpower, the strength of evidence against a particular target — can lead to charges for some but not others, even when their conduct appears similar.

Henry Hockeimer Jr., who handled fraud and public corruption cases in the U.S. attorney’s office in Oklahoma City, said Sui’s Canadian residency would require prosecutors to “jump through a variety of hoops,” including a sign-off from Justice Department headquarters to pursue extradition. Canada will agree to the extradition or provisional arrest of a resident only if the crime alleged in the United States is also a crime in Canada, said Hockeimer, who now leads Philadelphia law firm Ballard Spahr’s white-collar defense practice.

“It certainly takes more time than going after someone in the United States,” he said.

Though more parents have been implicated in Singer’s scheme than the nearly three dozen arrested in March, a flood of new charges has yet to materialize.

Since the case was unsealed March 12, just one more person, Jeffrey Bizzack of Solana Beach, Calif., has been charged. Prosecutors secured an agreement from Bizzack, the longtime business partner of surfing superstar Kelly Slater, to plead guilty before announcing in June he’d been charged with fraud conspiracy.

Given the size of the case — 51 defendants, about half of whom have pleaded not guilty — and that they’ve marshaled legions of attorneys, charging decisions may come down to manpower, said Michael Magner, a former federal prosecutor who now works for the Jones Walker law firm in New Orleans.