Venting Off Steam: Violent Gaming can be a Healthy Outlet 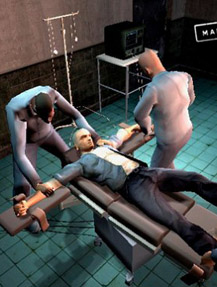 We’ve all had what is poetically called, “one of those days.” You can miss a class, be late for work, be yelled at by a professor, fail a test, breakup with your significant other, and so on. These are the days for which gaming was intended.

The various ways to loosen up through video games vary as much as the people who play them. Some people let loose with puzzle games that challenge the mind, some unwind with fighting games such as “Street Fighter” or “Mortal Kombat,” while others relax with first-person shooters such as “Quake” or “Unreal Tournament.” This article will look at some of the more violent games available to us, and why – in their own combative ways – they’re so good at helping us unwind.

“Wolfenstein 3D” is one of the original violent video games. This classic computer game put the player in the role of B.J. Blazkowicz, slaying countless nameless Nazis in the name of, well, nothing really. It was all an excuse for senseless violence and succeeded on every level.

Then came “Doom,” and everything changed. “Doom” was a revolution in violent gaming which spawned dozens of copies and a couple of successful sequels. It also gave birth to what is the most violent of all gaming genres – the first-person shooter. Some might argue that since “Wolfenstein” came first, it was the game that spawned the genre. However, it wasn’t until “Doom” blasted its way onto the gaming scene that the genre really took off.

Today, first-person shooters are among the most popular – and most aggressive – forms of video gaming. Games such as “Doom 3,” “Painkiller,” “Manhunt” and “Halo” all feature not only exceptional game-play, but loads of gore as well.

Some folks might not like all the violence present in today’s most popular games, possibly thinking that this can alter a young person’s mind to make them do corrupt things. This kind of reasoning is a fallacy, common to those who don’t understand how liberating these games can be.

While it’s easy for those to misunderstand the sheer emotional release these games provide, it doesn’t help the industry in the long run. It seems as if each time a new “Grand Theft Auto” game is released, for example, it’s banned somewhere, or blamed for the reason behind something else.

This kind of reaction is a shame because those of us who play and enjoy these games know how wonderfully stress relieving they can be. For example, say you had a bad day at the office, or in class. What’s a better outlet? Playing “Grand Theft Auto” or doing something that can be harmful to you or others? It seems as if the former is much better than the latter in terms of emotional and physical damage.

Thankfully, controversy hasn’t stopped the development of violent games – in fact, it seems as if controversy has helped further spur its development. It seems as if there are more games with violent tones today than ever before. Maybe it’s because advances in graphics can bring us photo-realism, or perhaps, given the turbulent world we live in, there’s more of a need for such games.

Whatever the case, violent gaming has a permanent place in the realm of video gaming, and deservedly so. While there are video games that tap into every type of experience – from saving a world, to flying a plane, to running over pedestrians –video games can let off steam and be a healthy outlet to do so. Where, of course, violence in real life is anything but healthy.

Brian Rubin is a freelance gaming journalist whose column regularly appears in Campus Circle. To contact Brian, e-mail him at gaming.editor@campuscircle.net.