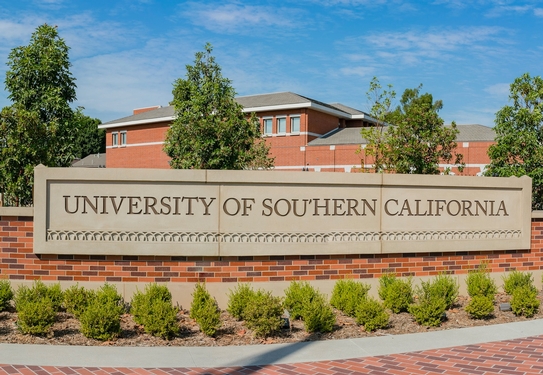 In a new twist to the college admissions scandal, a father accused of resorting to fraud and bribery to get his daughter into the University of Southern California has subpoenaed the university for records detailing its admissions process and to what degree, if any, it is influenced by donations.

The subpoena is an early indication that parents charged in the college admissions scam intend to take aim at a sensitive — and to this point secretive — calculation: how presumably meritocratic decisions on whom to admit or reject can be weighted by an applicant’s wealth.

USC has asked a judge to quash the subpoena, saying the demand from Robert Zangrillo, a Miami financier whose daughter was admitted to USC in 2018, amounted to “an impermissible fishing expedition.”

The university’s retort, which includes an affidavit from its dean of admissions, sheds light on the private school’s opaque and increasingly selective admissions process and, in particular, its practice of flagging certain applicants as “special interest.”

Zangrillo’s subpoena, which USC received July 11, requests records related to how the university flags some applicants as “VIP” or “special interest,” records of the university president’s involvement in such designations, a database of donors and the percentage of applicants admitted within a year of their families donating $50,000 or more, among other records. The subpoena was filed under seal, but USC included a copy of the document in its request to have it thrown out.

To ensure his daughter, Amber, was admitted to USC, prosecutors say Zangrillo paid $200,000 to William “Rick” Singer, a Newport Beach college admissions consultant, and $50,000 to an account controlled by a USC administrator. Zangrillo has pleaded not guilty to charges of fraud conspiracy and money laundering conspiracy.

Singer is the admitted linchpin of a sprawling, nearly decadelong scheme to fix college entrance exams for the children of his wealthy clients and misrepresent them to universities as recruited athletes. He pleaded guilty to four felonies in March and cooperated with federal prosecutors in Massachusetts who uncovered his scam.

Donna Heinel, the USC administrator who is accused of steering Zangrillo’s daughter into the school, has been charged with racketeering conspiracy and fired from her post as the third-ranking official in USC’s athletics department. She has pleaded not guilty.

While his scheme breached 10 universities, Singer sneaked more of his clients’ children into USC than any other school. Of the 34 parents charged by the U.S. attorney in Massachusetts with fraud and money laundering crimes, 19 have children who attended or are still enrolled at USC. Thirty-three students at the school are under scrutiny for having ties to Singer. In addition to Heinel, three USC coaches have been charged with racketeering conspiracy.

Debra Wong Yang, a former U.S. attorney in Los Angeles whom USC previously retained to investigate the conduct of its disgraced medical school dean, argued in a motion filed Thursday in Massachusetts federal court that the records Zangrillo is seeking aren’t relevant to the circumstances of his daughter’s admission. Nor, Yang said, are they relevant to Zangrillo’s state of mind during his daughter’s college admissions process, when he is accused of paying Singer to falsify her application and grades.

One of Singer’s employees took online classes for Amber Zangrillo, prosecutors allege, including retaking an art history course in which she had received an F. When she applied to USC in 2018 as a transfer student, her application said she rowed an average of 44 hours a week, 15 weeks a year, according to a complaint charging her father with fraud conspiracy. Prosecutors say she’d never rowed competitively.

Amber Zangrillo hasn’t been charged with a crime; she’s currently enrolled at USC, according to the college’s filing. She was admitted to USC not as a rowing recruit but as a “special interest” student who’d been flagged by the athletics department, USC’s dean of admissions said in an affidavit included in the school’s filing.

The dean, Timothy Brunold, said USC “tags” a number of applicants “for whom there is a special interest,” but the majority of flagged applicants are still denied admission. USC admitted just 11% of applicants in 2019, the lowest rate in school history.

“USC has neither official procedures nor specific documents identifying all of the students who are tagged, who applied the tags, why the tags were applied or when they were applied,” they said.

Zangrillo had sought a record of donors whose children were tagged. While his motion for a subpoena was filed under seal, a redacted excerpt said Zangrillo’s attorneys wanted records concerning “students applying for admission in close proximity to a financial donation from a parent.”

Brunold, the dean of admissions, pushed back on the notion a family could buy its child’s admission with a donation, saying USC’s admissions office doesn’t track gifts.

“If I had known that a prospective student’s family had donated $50,000 or $100,000 to USC, it would not have affected the admission department’s decision whether to admit the student,” he said.

Had admission to USC been guaranteed for such a sum, the school’s attorneys argued, Zangrillo would never have gone to the trouble, or the cost, of paying $250,000 to falsify his daughter’s application and bribe an administrator.

Zangrillo also has demanded all communications between USC employees — emails, texts and instant messages — that concern his daughter. USC’s lawyers scoffed at such a “gargantuan task.”

“She likely has thousands of emails with various students, professors, administrators and other school personnel, all having nothing to do with the circumstances of her admission to USC,” they said, but Zangrillo would nevertheless like USC “to review not only the emails of every single employee, but also confiscate their phones and review all of their text messages.”

Rather than seeking specific documents, USC’s lawyers said, Zangrillo has demanded reams of far-flung and, ultimately, irrelevant records “in the hopes of stumbling upon potential evidence.”

Campus News
‘Adulting’ is hard. UC Berkeley has a class for that
448 views