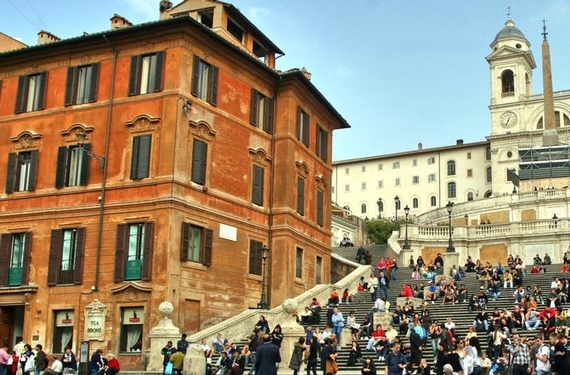 he Spanish Steps in Rome, before new rules banned sitting.

When I traveled to Rome in March, I enjoyed a few moments of relaxation on the Spanish Steps, which run 138 rungs between the Spanish square and the hilltop Trinità dei Monti church. Tourists have done the same since before Audrey Hepburn and Cary Grant dallied on the iconic 18th century stairway in “Roman Holiday.” My stop there felt nearly obligatory — and entirely pleasant.

But the Roman government is not so pleased.

It recently passed a law that makes sitting on the Spanish Steps punishable by up to 400 euros. Gone are the selfie-taking preening teens, the cigarette-smoking loafers, the exhausted tourists just trying to catch their breath even as they relish one of the imperative sightseeing spots of Rome.

The current look of the Spanish Steps — devoid of loungers — may look odd to anyone who has seen the steps in movies or photos over the years. People have been hanging out there for centuries, after all. But I appreciate the impulse.

The mayor and City Council are struggling to protect their historical landmarks, as are leaders of many of Europe’s cultural capitals. At least Rome hasn’t closed the steps or offered timed entry, as is the case with Barcelona’s Park Guell, designed by architect Antoni Gaudi.

The Eternal City is filled with more culturally significant sights than most. And it has been attempting to preserve its gems for years. The city made it illegal years ago to roll wheeled bags down the steps of its monuments.

The new law also prohibits wading in the city’s fountains. (I presume the woman I saw splash into the fountain at the base of the Spanish Steps would be forgiven; she fell in while taking a photo.)

The law may aim to discourage bad behavior by tourists, but it’s also helping tourists help themselves by preserving the very sights they travel to see.