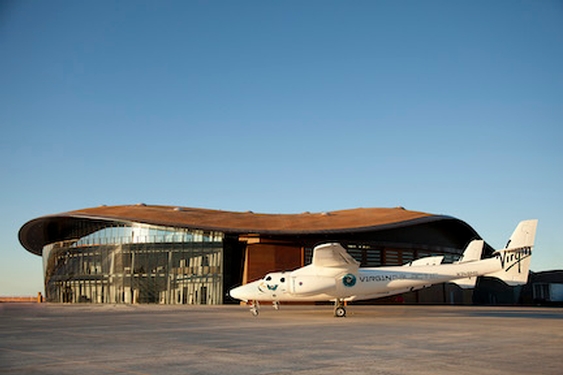 When Virgin Galactic space tourists get ready to launch 50 miles above the Earth, they’ll first hang out in a new facility called the Gateway to Space.

The company founded by Richard Branson recently revealed the look of the new terminal located at Spaceport America in Las Cruces, N.M. This is the new home for customers to earn their astronaut wings, by rocketing into the upper atmosphere aboard its fleet of SpaceShipTwo vehicles, see the curvature of the Earth and experience weightlessness.

On display were two floors dedicated to spaceflight operations but also customer spaces. The company said the facility is now operational and able to support paying customers.

“Virgin Galactic has striven to remain faithful to that tradition by choosing an elegant, experience-focused concept for the space launch system itself,” reads a statement from the company. “Similarly, the company’s choice to operate from Spaceport America in New Mexico was due in no small part to the state’s decision to commission landmark architecture for the world’s first purpose-built commercial spaceport.”

Designed by Foster (plus) Partners, the Gateway to Space features a first floor called Gaia, as in Earth, which acts as the departure and return point for the trips into space.

“The floor design, furniture and fittings promote social interaction and human discourse — a sense of togetherness and unity,” reads a company statement. “An elevated, interactive digital walkway will heighten the departure experience for the Future Astronauts … The Earth-focused design will provide a fitting welcome to those newly graduated astronauts returning from space with a new appreciation and understanding of our home planet.”

Customers and Virgin Galactic pilots and the rest of the space operations team will interact in the space, sharing spaces for breakfast and coffee at Barista Island at the center of the facility.

The second floor is called Cirrus. This is home to mission control, the mission briefing room, pilot corps and more from the flight operations group.

“It is the beating heart of spaceflight operations, and is connected to the community hub of Gaia below through a double height atrium,” reads the statement. “The color palette graduates from the earthy tones below in Gaia to lighter white and grey shades, reflecting the skies beyond and providing a clean environment supporting operational focus.”

Also part of the structure is the hangar for the Virgin Galactic fleet. That includes space for two of the company’s carrier aircraft, dubbed WhiteKnightTwo planes, and five of the SpaceShipTwo vehicles. Already on site is the VMS Eve, with its 140-foot wingspan. This is the airplane that has carried the SpaceShipTwo VSS Unity on several test flights.

It flies to 50,000 feet, lets the SpaceShipTwo drop, and then that spacecraft rockets up out of Earth’s lower atmosphere to more than 50 miles altitude.

The altitude isn’t without debate. The Karman line is an internationally accepted threshold for space, which is 100 kilometers, or 62 miles above the surface of the Earth. Competing commercial space travel company Blue Origin will feature missions that take its customers past the Karman line.

Virgin Galactic had been performing its test flights from the Mojave Air and Space Port in Mojave, Calif. Its remaining test flights will now take place from Spaceport America.

When flights do begin, the SpaceShipTwo has room for up to six passengers in addition to two pilots on flights that have taken about 15 minutes from launch to landing.

While the trip up see the spacecraft hitting Mach 3, once the ship cuts its engine, those on board experience several minutes of weightlessness before the return trip to Earth. On descent, the SpaceShipTwo enables its feather configuration, which is a method so the craft’s shape transforms into something similar to a badminton shuttlecock with wings rotating up. On descent, the craft looks more like the capsules used by astronauts in the Apollo missions coming back to Earth.

This allows for a safer way in dealing with the heat stress of reentry. Once the craft is safely within a lower range of Earth’s atmosphere, the wings rotate back into place allowing for the craft to glide back to a landing strip in the same manner that the space shuttle program did at Kennedy Space Center and other NASA facilities.

While the company has performed five supersonic test flights of VSS Unity, the company’s space tourism plans took a hit in 2014 when the original SpaceShipTwo crashed over the Mojave Desert, killing one of two test pilots. The National Transportation Safety Board said that crash occurred because the co-pilot had opened the “feather” system too early. That ship was built by Scaled Composites, which is owned by Northrop Grumman Corp. The new ship is built by the Spaceship Co., which is a manufacturing company that is part of Virgin Galactic.

While the company has not announced the first date for its paying customers to take the first commercial flight, hundreds have already signed up at a price of about $250,000 a ticket.

Branson has said he’ll be on the first flight.

Travel
Want a camping reservation in California? Try this
181 views

Travel
Fast forward to summer with these beachy adventures
120 views

Travel
If it’s Tuesday, this must be Berkeley: My family’s weird COVID-era college tour
162 views

Travel
When can Americans get back to Europe?
140 views