Trump says automakers are ‘crazy’ to side with California. They don’t need another fight 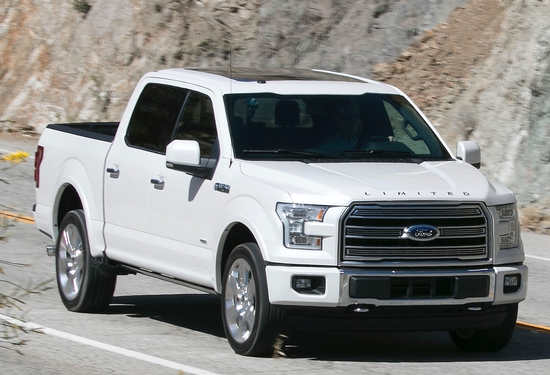 The 2016 4x4 Supercrew Limited is Ford's top of the line F-150 model, which has been the most popular vehicle sold in the U.S. for the last three decades.(Myung J. Chun/Los Angeles Times/TNS)

The Trump administration has a plan to help the auto industry. It wants to obliterate a tough set of Obama-era greenhouse gas emissions requirements set to take effect in 2022, then shove California regulators aside and assert full federal control over how much pollution motor vehicles are allowed to spew.

You might think that would be music to the ears of an industry that long resisted the state’s earlier efforts to dramatically raise mileage standards, only signing on in 2009 after the federal government brokered a deal while saving two of Detroit’s Big Three.

But four automakers — Honda, Ford, Volkswagen and BMW, which together account for 28% of U.S. sales — have signed onto a compromise deal with California to raise MPG and cut emissions. That prompted President Trump to call auto executives politically-correct weaklings who’d short-change driver safety and pass unnecessary costs on to customers. “Crazy!” he tweeted at them last week. “Foolish executives!”

While the auto companies would love to get the government off their back, they’re trying to avoid a costly and confusing fight just when they’ve got their hands full with a fundamental shift in the industry — the rise of self-driving cars, emerging competitors from China and Silicon Valley, and a growing international policy revolt against the internal combustion engine.

The carmakers want a predictable 50-state solution to automotive regulation so they can focus money, time and attention on surviving that disruption.

“It’s a very delicate moment for the auto industry,” said William J. Hampton, a longtime industry analyst and editor of Auto Beat Daily in Detroit. “They really would like to avoid uncertainty and legal strife.”

Much depends on what comes next — whether the other dozen or so car companies, who thus far haven’t taken a public position on the matter, end up siding with Trump or with California and the group of four.

All eyes are on General Motors, Fiat Chrysler and Toyota. If one or all swing to the California side, it will make it tougher for Trump to justify a move that the industry claims will cause negative and needless disruption. Both California and the group of four are reportedly in talks with at least some of the holdout automakers, though only the involved parties could say for sure, and they’re not talking. They’ve got a couple more months — public hearings on the Trump rollback are being held through Oct. 26. The Trump administration could issue its decree after that.

At the same time, emissions standards from the federal government and California were harmonized — a 50-state solution.

For all their griping, the auto companies have hit those targets, through a number of technology and design advances, including:

—Computer controls that turn off individual engine cylinders when they’re not needed.

—Start-stop technology that deactivates an engine at red lights.

—Up to 10-speed transmissions for smoother power shifts.

The Obama deal called for a reassessment last year on the 2022-25 goals. While the industry said some changes were needed, the Democrats and Republicans went binary: The Obama administration said the plan was good as is, no changes needed, just before Trump took office. The Trump administration came in and said reaching 37 mpg by 2020 was good enough, and it planned to scrap further requirements.

The White House argues that ditching future emissions requirements will save consumers hundreds to thousands of dollars per vehicle. Industry analysts say that’s true, although Consumer Reports counters that fuel savings would more than make up for higher sticker prices.

The administration also claims that rolling back the standards will improve automobile safety, because lower prices will prompt consumers to trade up sooner to newer, safer vehicles. It calls its proposal The Safer Affordable Fuel-Efficient (SAFE) Vehicles Rule.

Rarely mentioned by the administration when talking about fuel standards: its own skepticism about climate change, its enthusiasm for the fossil fuel industry and Trump’s own denigration of renewable energy technologies (with an emphasis on the demerits of wind power).

Before siding with California, the group of four extracted some concessions from the California Air Resources Board (CARB). Automakers would have another year, until 2026, to meet the requirements. They’d get additional compliance credits based on electric-vehicle sales, and would no longer have to account for carbon emissions by power plants that generate EV electricity.

Notably, the automakers put in writing that it “recognizes California’s authority” to set emissions standards. That right was granted by Congress in 1970 as part of the Clean Air Act. Although the Trump administration argues that the agreement does not cover greenhouse gases, courts thus far have decided in California’s favor. The Trump rollback, if left standing by the courts, would prevent the state from setting greenhouse gas regulations on motor vehicles.

The 1970 law also allows other states to adopt California’s standards as their own. With the recent addition of Colorado, 14 states representing 40% of the U.S. market are in the California camp, concentrated in blue states in the Northeast and along the West Coast.

Honda, Ford, Volkswagen and BMW are well positioned to conform with the Obama-era standards. (California-based Tesla, of course, with an all-electric, zero-emission fleet, is best positioned of all.)

Honda has long led the industry in fuel efficiency. Decades ago, when it began exporting to the United States and saw California as a beachhead, Honda made a strategic decision to align itself with California’s fuel standards. The Japanese carmaker still boasts the most efficient fleet of vehicles of any brand sold in the U.S. About 45% of its vehicles are sold in the 14 California-coalition states, according to Cox Automotive.

Since Volkswagen smashed its reputation in the diesel-emissions cheating scandal, the German carmaker has staked its future on zero-emission electric vehicles. BMW is also banking heavily on an EV future. Each has about 45% of the California-coalition market.

Ford’s motives aren’t so obvious. According to the Union of Concerned Scientists, it ranks near the bottom of the industry in fuel efficiency. And its California-coalition share is only 28%. But it is by far the leader in fuel-efficient pickup trucks.

Ten years ago, when GM and Chrysler were being bailed out of bankruptcy by the federal government, Ford invested its richer cash pile in boosting the fuel efficiency in its F-150 line, the best-selling vehicle in America. Chevy’s Silverado and Dodge’s Ram are playing catch-up on the efficiency front.

At the time, oil prices had spiked to an all-time high, along with gas prices, so the investment in fuel efficiency made a lot of sense. In 2008, the F-150 line offered three engines, all of them gas-guzzling V8s. Currently only a single V8 is on offer, with five other six-cylinder engine options. Over that time, F-150 fuel efficiency has grown 50%, from an average 14 mpg for the V8 engines to 21 mpg with a V6. At the same time, the trucks gained horsepower and towing strength.

Today, gas prices have fallen about 35% from the 2008 peak. For pickup buyers, fuel economy “is not even in the top 10” list of purchase criteria, according to Ford trucks spokesman Mike Levine. Customers say they want better fuel economy but not at the expense of power. He said Ford decided it could offer both.

It reduced engine size while adding turbocharged horsepower to its EcoBoost engine line. In 2015, Ford replaced the F-150 steel body with a high-strength aluminum alloy, shaving off 700 pounds. In 2017, it introduced a 10-speed automatic transmission; that allowed it to shrink the remaining V8 truck engine. Last year, Ford extended the 10-speed transmission across the product line, and this year it came out with a diesel engine that gets 30 mpg.

Other automakers have made similar gains in efficiency, and the number of companies signing on to the California compromise could grow, analysts say. In June, after the Trump administration broke off negotiations with CARB, 17 car companies co-signed a letters to President Trump and California Gov. Gavin Newsom beseeching them to resume talks and reach a compromise. The Trump plan, they said, is “untenable” and would damage their profits.

Mark Wakefield, who heads the automotive practice at consulting firm Alix Partners, said he’s not so concerned with how many companies take one side or the other. “What matters is will there or won’t there be a national standard,” he said. “The uncertainty really hurts when you consider investments not being made.”

At one time, automakers had to retrofit many of their cars to meet California standards while selling more-polluting vehicles in the rest of the country. That’s unlikely to happen even if the U.S. market is broken in two. More likely, the companies would have to adjust their product mix to meet regulations by adjusting prices in different states to manipulate higher or lower demand. (They already do that with electric cars, which are sold for less than it costs automakers to build them, a situation they hope will change as volume grows and battery costs go down.)

That could benefit car dealers in Nevada, for example, who could sell more high-emission cars for less money and draw customers from dealers in California. And a two-market split would provide some advantages to companies that haven’t been as aggressive on engine efficiency or development of electric vehicles.

Should Trump go forward, California seems prepared to force just the kind of regulatory split that the industry is trying to avoid.

“If the current federal vehicle standards proposal is finalized, we will continue to enforce our regulations and pursue legal challenges to the federal rule,” CARB Chairwoman Mary Nichols warned when the group of four deal was announced.