In college admissions scandal a judge must decide: Does it matter how much parents paid? 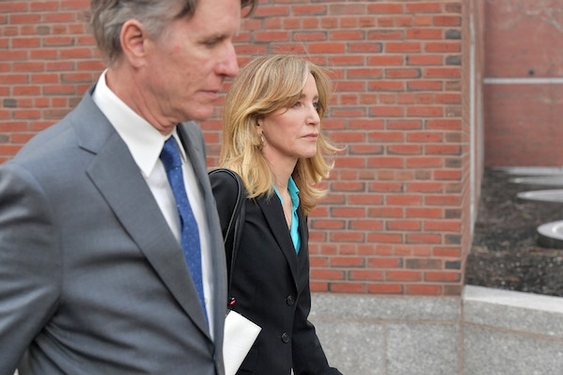 As a judge in Boston prepares to sentence parents in the college admissions cheating scandal, prosecutors, defense lawyers and others are battling over unresolved questions: Is prison the right punishment? And, if so, should the amount of money a parent paid in the scam determine their time behind bars?

So far, 15 of the nearly three dozen parents charged with conspiring to commit fraud with the scam’s leader, college admission consultant William “Rick” Singer, have pleaded guilty. The first two in the group were slated to be sentenced this week, but U.S. District Judge Indira Talwani hit pause in the proceedings to resolve a stark disagreement over how she should calculate the parents’ culpability.

The dispute revolves around whether Singer caused the universities and testing companies he exploited any financial loss. Under federal sentencing guidelines, prison terms for fraud are typically pegged to a victim’s financial loss. If the loss cannot be tallied, the amount a perpetrator gained can be used instead. Singer has pleaded guilty to four felonies, acknowledging he rigged SAT and ACT exams for his clients and misrepresented their children as recruits for sports they didn’t play.

Since March, when they announced charges against Singer, his alleged accomplices and parents, prosecutors have portrayed the universities and companies that administer college entrance exams as the victims in the case. Instead of attempting to pin down the loss to a particular school or company, prosecutors required parents to sign plea agreements that included proposed prison sentences based on the amount of money they paid in Singer’s scheme.

For example, actress Felicity Huffman, who is scheduled to be sentenced Friday, admitted to paying Singer $15,000 to rig her daughter’s exam score. Based on that amount, prosecutors asked Talwani to send Huffman to prison for one month — a penalty at the low end of the zero-to-six-month range called for by sentencing guidelines.

But for Stephen Semprevivo, a father who confessed to paying Singer $400,000 to sneak his son in to Georgetown, the government used the larger dollar figure to boost his sentencing range under the guidelines to 21 to 27 months. Prosecutors ultimately decided to show the business executive leniency by asking Talwani to go below the guideline’s range and put him behind bars for 15 months.

That, however, is not how probation officials think the parents’ cases should be dealt with.

The federal probation office, which typically recommends sentences to judges, concluded the universities and test companies suffered no financial loss, according to a memo Assistant U.S. Atty. Eric Rosen filed in court last week. As a result, Rosen wrote, probation officials have recommended to Talwani that all the parents should be given a range of prison sentences of zero to six months, regardless of how much they paid.

Talwani held off on sentencing Semprevivo and another father, who were scheduled to learn their punishments this week, in order to hold a hearing Tuesday on the disagreement.

How she rules will reverberate throughout the case, which prosecutors have said is the largest ever criminal probe into college admissions.

Although federal judges can issue sentences above or below a guideline range, if Talwani sides with the probation office it is likely Semprevivo and others in similar scenarios will be given significantly lighter sentences than what prosecutors are seeking.

The fight has implications for the 19 parents charged with paying Singer who have maintained their innocence. The judges handling those cases are likely to be influenced by how Talwani rules, since judges in the same federal district typically try to avoid issuing contradictory rulings.

With that in mind, a parent who was contemplating a guilty plea may decide instead to risk a trial if Talwani sides with the probation office, since they’ll have a better chance of avoiding a harsh sentence if they’re convicted.

Prosecutors lost an earlier round in the legal tussle over whether Singer’s scheme caused actual financial loss to colleges. In June, John Vandemoer, the former sailing coach at Stanford, avoided prison time despite pleading guilty to taking hundreds of thousands of dollars in bribes in exchange for designating Singer’s clients as competitive sailors to boost their chances of winning admission.

Because Vandemoer had put the money into university athletic accounts instead of pocketing it personally, the judge in his case found the school had not been harmed financially and rebuffed prosecutors’ request for a 13-month sentence.

The legal fight over sentencing rules is playing out amid the government’s broader push to persuade Talwani that prison time, instead of probation or home detention, is the appropriate punishment for parents in the case.

In memos filed Friday, Rosen asked the judge for each of the parents to spend one month to 15 months in prison. Even a short time locked up, he argued, was important in light of the crimes they’ve admitted to committing.

“Some period of incarceration is the only meaningful sanction for these crimes. … For wrongdoing that is predicated on wealth and rationalized by a sense of privilege, incarceration is the only leveler: in prison everyone is treated the same, dressed the same, and intermingled regardless of affluence, position or fame,” Rosen wrote. “No other form of sanction makes plain that all Americans are equally obligated to play by the rules and must be equally accountable for breaking them.”

Home confinement, he wrote, would be “a penological joke,” while probation with community service “is too lenient and too easily co-opted for its “PR” value.”

Attorneys for the parents, meanwhile, are certain to ask Talwani to spare their clients from time behind bars. Huffman’s attorney did just that in a filing Friday, arguing the actress was “deeply remorseful” for paying Singer.

Rosen pushed back against the probation office’s finding, arguing to Talwani that the universities and testing agencies have in fact been hurt financially. The schools, he wrote, paid salaries to coaches and others who were allegedly working with Singer to get undeserving students coveted admission spots, paid for costly internal investigations and audits in light of the scam, and will lose money from application fees if fewer students apply to attend because of the scandal.

James Felman, an attorney not involved in the admissions case who has testified repeatedly before the U.S. Sentencing Commission about the guidelines for financial crimes, said he believed the government would be hard pressed to convince Talwani those types of losses should be placed at the feet of the parents. The expected dip in applications, for example, is more the fault of the coach who took the bribe from Singer, not the parent who paid Singer, he said.

“They are very smart folks in Boston, but I don’t buy any of these arguments,” he said.

In general, the concept of using a victim’s loss to benchmark culpability is imperfect since people who commit fraud can have different levels and types of intent, Felman and others said. As an example, Felman said a person who deliberately preys on a victim to bilk them out of their money and another who lies on a loan application and can’t repay the money should not be viewed equally.

“It can be really oversold that we can just add up the loss and use it to punish people,” he said. “Here, it strikes me as a particularly bad fit.”

In his memo, however, Rosen argued that using financial loss as a measuring stick in fraud and bribery cases is an accepted practice and cited other federal cases with parallels to this one to bolster his point. He zeroed in on what he said would be the inherent unfairness of putting all the parents on an equal plane.

Campus News
‘Adulting’ is hard. UC Berkeley has a class for that
572 views